You Are Here: Home → Yet another Palestinian protester killed as Israel steals his land

Yet another Palestinian protester killed as Israel steals his land 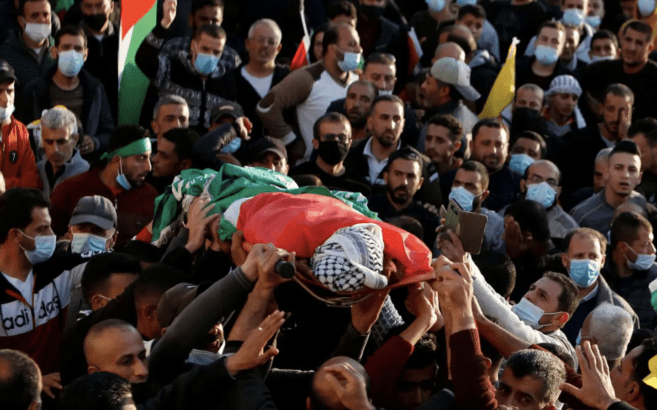 The funeral of Palestinian Atef Haneisheh in Beit Dajan, last week, who was killed as he protested with others against Israel’s theft of their land.

The incident is all too common: Palestinians gather on a Friday to protest the theft of their land; Israeli soldiers respond with live fire, killing a protester and enabling the land grab to go on, unhindered.

“First, we’ll talk about the lands,” Abd al-Rahman Haneini, the council head in the West Bank village of Beit Dajan, told us when we arrived there this week. We had come to learn about the killing of a local man, Atef Haneisheh, a 47-year-old farmer and carpenter, and father of three. Last Friday, as he took part in the village’s weekly demonstration against the unauthorized settler outpost that was set up on its land, he was shot in the head and killed by an officer in the Israel Defense Forces.

First, the land. Last September, residents of the village’s eastern edge reported that a bulldozer was at work nightly on their land. Located east of Nablus, Beit Dajan has a population of about 4,500. Its homes are perched on a slope and its land stretches across the fertile valley below, green this time of the year.

When the council head visited the site mentioned by the villagers, he was stunned to discover that someone had carved out a dirt road about 4 kilometers (2.5 miles) from the village, which was liable to cut the village off from its farmland, covering about 20,000 dunams (5,000 acres) of wheat fields, almond trees and olive groves. The villagers were aware that every such path could disconnect them from their property, under the auspices of the Israeli authorities. The illegal trail about 10 kilometers long led eastward from the Skali farm, an outpost established in 1998 by Yitzhak Skali.

About a month later, locals spotted a settler who arrived with 15 head of cattle and a tent; he built a fence and set up another outpost in this land of outposts around the settlement of Itamar. This is the method favored in recent years by the land plunderers: They build a cowshed or small animal pen that soon morphs into an authorized outpost; the surrounding land is then confiscated for pasture. The dirt road connected the Skali farm to its new satellite.

Only one settler lives there at the moment; the Palestinians say his name is Kobi, others say it’s Koki. In the photographs they show us, Kobi or Koki, who has a thick beard and mustache, is wearing a large white, wool kippa and holding a heavy machine gun. Footage taken by villagers about a month ago shows him speaking to them until a friend of his arrives on an all-terrain vehicle and starts to push them and beat them violently.

About a month after Kobi settled on the stolen land, the army showed up and evicted him. He moved about 50 meters away from his original location. The villagers put up a protest tent outside the outpost that had arisen before their eyes on their own land. A few days later, the IDF arrived, destroyed the protest tent and sufficed with confiscating a few tools from Kobi’s outpost. Kobi and his cattle remained on the land.

These events occurred late last October. Since then Beit Dajan has held a demonstration every Friday after midday prayers to protest Kobi’s outpost. A few hundred villagers march in the direction of their land and clash with the army, which awaits them and fires tear gas, rubber-tipped metal bullets, ostensibly nonlethal “tutu” bullets from .22 caliber rifles and stun grenades. Ten local residents have been wounded so far in the protests, which have not abated.

After a few weeks of demonstrations, IDF bulldozers blocked the dirt road leading to the Palestinians’ land. Since then they have been unable reach their land about 4 kilometers from the village other than by entering individually on foot. Kobi, joined by a few youths, began expelling the shepherds who came to use their land, threatening them with guns and driving them back with the all-terrain vehicle. The village’s demonstrations continued.