You Are Here: Home → Israel has no mercy on Palestinian prisoner Ahmad Manasra, whose mental health is worsening

Israel has no mercy on Palestinian prisoner Ahmad Manasra, whose mental health is worsening 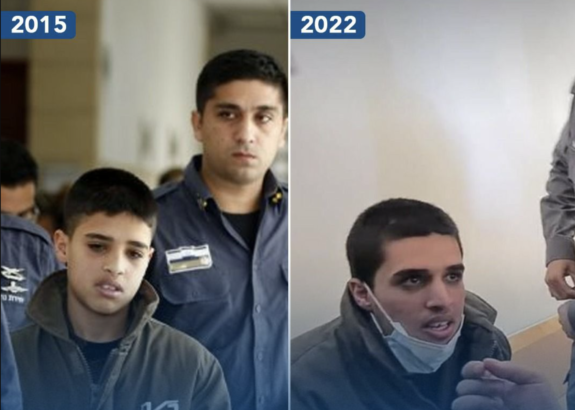 Ahmad Manasra, 13, at the beginning of his time in Israeli prison and now. He has been subject to torture, solitary confinement, and poor conditions, and suffers from extreme mental health problems. (Twitter)

Ahmad Manasra has endured years of harsh interrogations, abuse, and solitary confinement; mental health experts say his life is in danger – but Israel refuses to release him. Ahmad has served 6 years for a crime in which he did not participate.

On Tuesday, 28 June, 20-year-old Palestinian prisoner Ahmad Manasra was denied early release by the Israeli parole board of Ramle prison.

The decision comes despite appeals by his defense team, which in light of his serious and deteriorating mental health condition, has petitioned for his release under Israel’s Parole Law of 2001.

In 2015, Manasra, who was only 13 years old at the time, was rammed by an Israeli vehicle and left to bleed on the ground after he and his cousin Hassan Manasra, 15, allegedly attempted to carry out a stabbing attack near the settlement of Pisgat Ze’ev in occupied Jerusalem.

Hassan was killed on the spot, and Ahmad was arrested by Israeli authorities, after he suffered internal bleeding and fractures to his skull.

The video of a young Ahmad’s contorted and bleeding body sprawled on the ground as an Israeli settler yelled at him in Hebrew “die, you son of a whore, die” quickly spread across local and international media outlets, and set the stage for one of the most high profile cases against a Palestinian in recent years.

Over the past year, Manasra’s lawyers and family have stepped up their campaign to demand his freedom, after years of harsh interrogations and abuse coupled with prolonged stents in solitary confinement which led to a severe deterioration of his mental health.

Presently, Manasra continues to suffer from health issues, induced by the injuries sustained when he was 13, followed by the ill-treatment and abuses forced on him by Israeli interrogators and armed forces. Mental health workers worldwide continue to demand that Israeli authorities release the now 20-year-old to afford him a chance at recovery.

According to Amnesty International, Manasra has been diagnosed with schizophrenia, suffers from psychotic delusions, and is “severely depressed with suicidal thoughts.”

Manasra’s lawyer, Khaled Zabarqa, told Amnesty earlier this month that the matter of Manasra’s release was urgent, as his mental health condition posed “a real danger to his life.”

Following his punitive arrest in November 2015, Manasra was hospitalized due to the severe injuries sustained on the day of the alleged attack, and was chained to a hospital bed and reported to have been verbally abused by Israeli authorities and medical staff.

A month after his arrest, video footage of Manasra’s interrogation was made public, and showed the young boy being interrogated by three Israeli officers without the presence of his lawyer or parent.

The video caused widespread outrage, as the Israeli interrogators were seen shouting at, insulting, and threatening a visibly distressed Manasra in attempts to coerce him into a confession. During his interrogation he was also denied sleep, food, and right to legal representation. Distraught and in tears Manasra kept repeating “I don’t remember, I don’t remember.” A statement which became iconic in Palestinian circles of the abuses and duress he was under.

His lawyers also reported that Manasra was interrogated while under anesthesia, when he was neither fully aware nor in the presence of guardians. Palestinian minors commonly experience torture and ill-treatment, including illegal practices of physical abuse and psychosocial pressure.

At the time of the reported attack in 2015, Israeli law stated that children under the age of 14 could not be held criminally responsible. Additionally, the courts found that Manasra did not actually participate in the stabbings.

Despite this, he was convicted of attempted murder in 2016 and sentenced to 12 years in prison, becoming the youngest Palestinian to be sentenced by the Israeli civil court. In 2017, his sentence was reduced from 12 years to 9.5 with a note that the “Probation Service’s impression that a long prison term may have undesirable consequences for him.”

In 2021, Physicians for Human Rights- Israel (PHRI), diagnosed Manasra with severe psychiatric conditions reported to have developed during the time of his imprisonment and torture. In April of this year, the organization warned that if Israel keeps Manasra imprisoned, it may lead to irreparable damage.

The appeal for Ahmad’s early release was reportedly denied under the pretext of classifying his file as “terrorism,” a blanket term leveled by Israel against Palestinians, including Palestinian children accused of carrying out attacks, or even Palestinian civil society organizations working to fight against Israeli apartheid.

In the months after his trial, Manasra’s case was used by right-wing Israeli politicians to push for, and eventually pass, the “Youth Law”, which enabled authorities to imprison minors as young as 12 years old when convicted of “terror-related” crimes.

The law has been common reference by armed Israeli police against Palestinian children accused of throwing stones.

Ahmad Manasra is victim of Israel’s pattern of prejudicial treatment

Dr. Netanel Dagan at the Center for Criminology in Oxford University, has examined more than 207 decisions by the Israeli parole board on “security prisoners” and found that that parole board’s design of “enemy parole” is “an exclusionary, punitive and exceptional process disguised as inclusionary, equal and legitimate.” The case of Ahmad Manasra appears exemplary of the ways in which Israel’s judicial system works in tandem with the illegal settler population and the military, even at the expense of childhood and youth.

Ahmad’s mother, still awaits for the moment she can hold her son once more “my son does not leave my thoughts for even a minute. May God protect him and return him to my embrace to chat with me.” Denied basic human rights, fair trial, childhood protection, legal justice, and now the right to preserve what little remains of his health.