You Are Here: Home → OMG, Palestine advocacy is going mainstream – what went wrong? 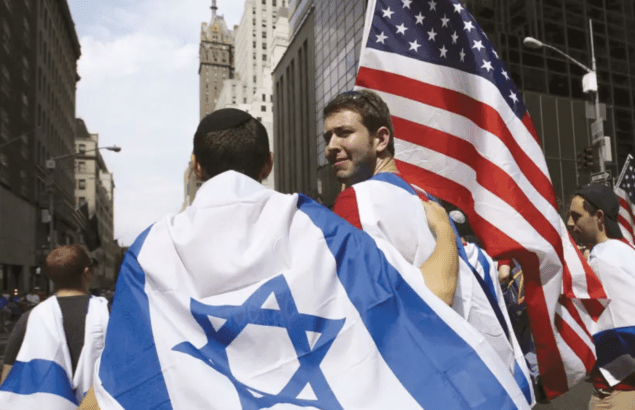 American Jews are changing their minds about Israel (pictured: people take part in the 51st annual Israel parade in New York in May, 2015) (EDUARDO MUNOZ / REUTERS)

Israel is no longer a favorite in some political circles. Some theories blame American Jews – but they’re wrong. Here’s the real reason.

As Mondoweiss recently reported, Rep. Josh Gottheimer (D-NJ-5) is beside himself. Members of his party have started “laying low” when it comes to Israel – because if they speak out, they will “just get the snot beat out of them.”

Translated: Congress members who sing Israel’s praises are hearing complaints from their constituents.

Subtext: regular Americans – including American Jews – know the truth about Israel and are not having it.

…the far left of our party are very critical of Israel and very critical of the relationship [between the US and Israel]…People think it’s taken over the Democratic Party, that’s just not true. It’s a very small cancer but it’s a growing cancer.

Let’s ponder that for a moment: according to Rep. Josh Gottheimer, criticism of Israel is taking over the Democratic Party! Yes, he compares Palestine advocacy to a “cancer,” but still, the call for justice for Palestinians is gaining momentum – in Congress, of all places.

How did Israel partisans let their influence slip away? How did the call for justice for Palestinians get so…out of control?

Several theories have been making the rounds.

A number of pro-Israel Jewish leaders claim, based on recent polling, that the younger generation of American Jews are the problem. They’re not standing with Israel as they should; they’re caving to the social media pressure.

Natalie Kahn, President of the Harvard Hillel (Jewish campus organization) suggests that poor propaganda may also be at fault: “We are losing the marketing game [on college campuses] and letting the loudest voices win while we attempt to play nice and let them walk all over us” (pro-Israel campus groups are not known for playing nice).

Elephant in the room

The one place where no Israel partisan is willing to place blame is with Israel itself. These folks reject documented reports of Israel’s apartheid practices, dismiss verified war crimes, and ignore violations of international law. If Israel’s behavior can’t be criticized, someone has to take the fall. Why not young American Jews who take the “side” of Palestinians?

Too many adults are either unable or unwilling to see what is before their eyes. Let’s stop berating the younger generation for prioritizing ethics over blind loyalty, and learn from them.

RELATED READING ON DEMOCRATS AND ISRAEL: