You Are Here: Home → New evidence that planned US embassy in Jerusalem is on Palestinian private property 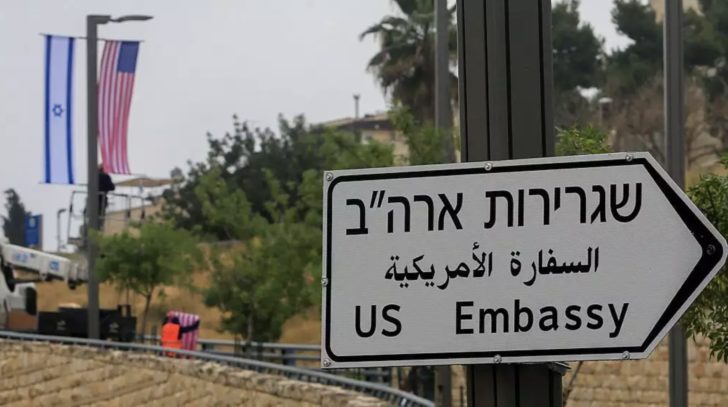 A sign in Jerusalem points the way to the US Embassy in Israel. (Oren Ben Hakoon)

Archival documents show the US Embassy Plan would violate the private property rights of Palestinian landowners and the internationally established right of Palestinian refugees to return to their homes and gain restitution of their properties.

New discoveries of archival records by Adalah offer proof of Palestinian ownership of the lands designated for the US embassy in Jerusalem.

The US Department of State and the Israeli Land Authority (ILA) submitted a renewed plan for a US diplomatic compound in Jerusalem to the Israeli planning authorities on 15 February 2021, after a previous plan expired in 2008.

The land on which the US Diplomatic Compound is to be built is registered in the name of the State of Israel, but it was confiscated illegally from Palestinian refugees and internally displaced Palestinians using the 1950 Israeli Absentees’ Property Law. Descendants of original owners of the land, who include US citizens and Palestinian residents of East Jerusalem demand the Biden Administration and the Israeli government move to cancel the plan.

The Plan (Plan 101-0810796 – “Diplomatic Compound – USA, Hebron Road, Jerusalem”) is currently at the advanced stage of the zoning approval process at the (District Planning Committee – Jerusalem).

Documents from state archives prove that the land was owned by Palestinian families and leased temporarily to British Mandate authorities before 1948. The land was confiscated from its Palestinian owners in 1950 after they became refugees during the Nakba. Archival lease agreements offer vivid detail on who owned the land before Israel seized it.

The lease documents reveal the names of the Palestinian landowners, including individuals from the Habib, Qleibo, El Khalidi, Razzaq, and El-Khalili families, among others. The property in question includes a parcel belonging to the Shaikh Mohamad Khalili family endowment (Waqf Dhirri), and should benefit his descendants, who include both EJ residents and US citizens.

If built, the US embassy compound will be located on land that was seized from Palestinians in violation of international law. Israel seized this land under the Absentees’ Property Law, which was used widely to dispossess Palestinian refugees and internally displaced Palestinians from their property in the years following the Nakba and again in 1967.

Both Human Rights Watch and Amnesty International, in their recent reports on Israel, identified the Absentees’ Property Law as a major tool of Israel’s oppression and domination of Palestinians within a broader Apartheid system.

The US Embassy Plan will violate the private property rights of Palestinian landowners and the internationally established right of Palestinian refugees to return to their homes and gain restitution of their properties.

Using the Absentees’ Property Law to confiscate land in Jerusalem also violates the city’s special status under international law. The international community holds that sovereignty over Jerusalem remains controversial and, for most states, undetermined.

Under UN General Assembly resolutions, Jerusalem has a special separate status (corpus separatum) and applying the Absentees’ Property Law in Jerusalem violates the city’s special legal status. In fact, the US State Department in 1953 based its opposition to Israel’s transfer of its foreign office to Jerusalem and its refusal to move the US embassy to the city on international law. 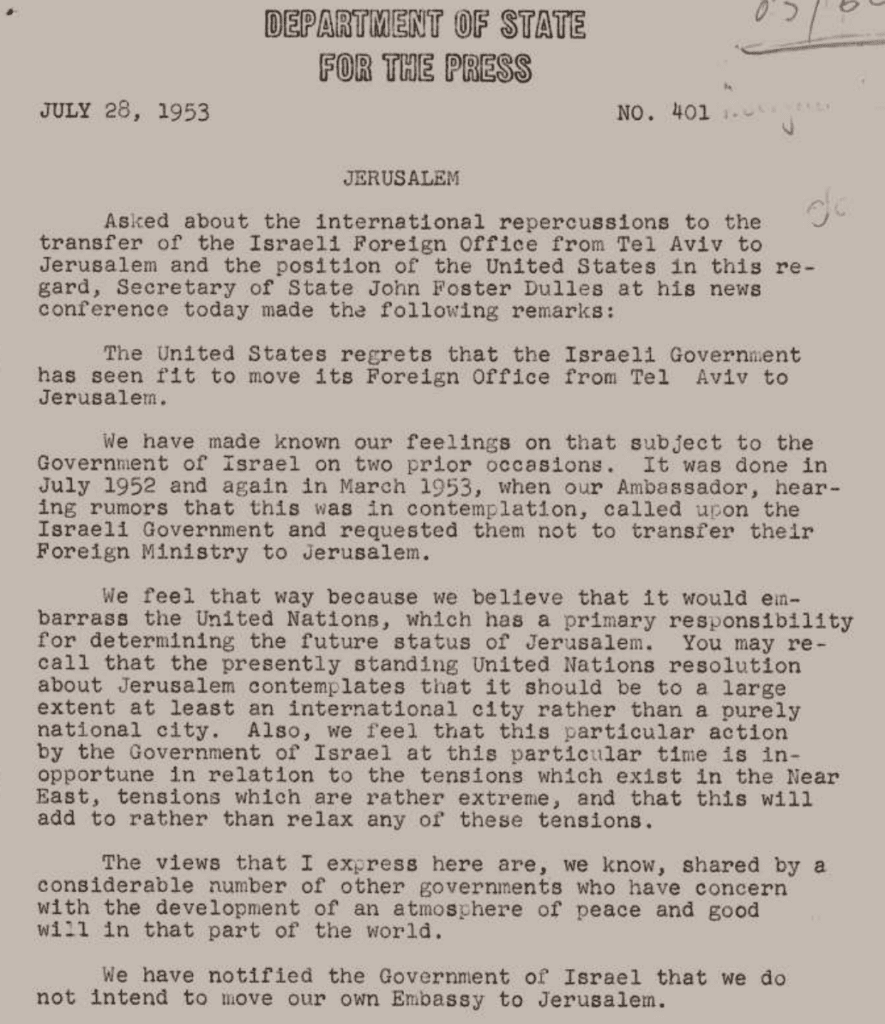 Given these flagrant violations, in Adalah’s view, the US and Israel must cancel this plan immediately to avoid building a diplomatic complex on this land, belonging to the descendants of the original Palestinian owners, who are both East Jerusalem residents and US citizens.

Further, the State of Israel must release the illegally confiscated land to its Palestinian owners. According to the Absentees’ Property Law itself, the property’s “Custodian” is meant to hold the land, but Article 28(a) stipulates that the Custodian has sole discretion to return the land to its owners or their descendants at any point.

Adalah’s Legal Director Suhad Bishara is consulting descendants of the original owners of these properties to determine possible courses of legal action to object to the approval of the Plan and demand restitution of the property in question.

BACKSTORY ON THE US EMBASSY IN ISRAEL: