You Are Here: Home → Israeli Colonizer Fatally Stabs a Palestinian in the Heart

Israeli Colonizer Fatally Stabs a Palestinian in the Heart 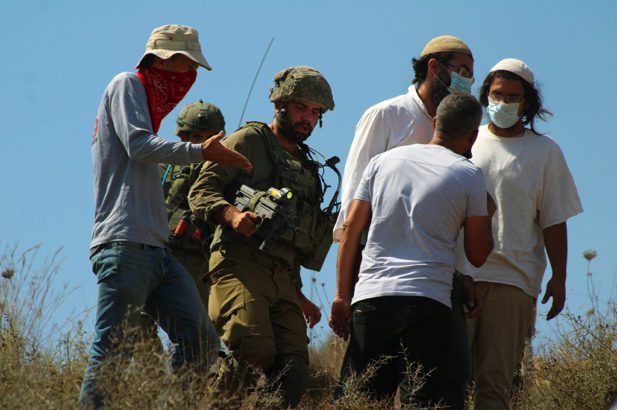 As Israeli settlers trespassed on Palestinian land and attacked the owners – and Israeli security looked on – one settler stabbed Ali Hassan Harb in the heart. The Israeli military then blocked him from being transported to the hospital until it was too late to save him.

On Tuesday, an illegal Israeli colonizer fatally stabbed a young Palestinian man on his land in Iskaka village, east of Salfit, in the central West Bank.

In a statement, the Palestinian Health Ministry said the young man, Ali Hasan Harb, 27, was stabbed in the heart and died from his serious wounds.

Eyewitnesses said an Israeli colonizer stabbed Harb when he and several other Palestinians intercepted an attack by the illegal colonizers, who invaded their lands and installed an outpost in the al-Harayeq area of the town.

“I was at home when a shepherd phoned us telling the family that several Israeli colonizers are installing an outpost on our land,” his cousin Firas Naim Harb said, “We went to our land, and once we arrived there, the colonizers ran away and stood at a distance before several other colonizers joined them and invaded our lands again.”

“The Israeli army then arrived in the area and started firing gas bombs at us, and before we knew it, a colonizer ran towards us and stabbed Ali before the soldiers prevented us from helping him,” he added, “The soldiers pointed their guns at us and threatened to shoot us if we approach Ali who was bleeding on the ground. We told the soldiers that we need to provide first aid to Ali and that they can shoot us if they want to, but we have to help him; he was bleeding for thirty minutes.”

“At least fifteen colonizers and armed guards of the Ariel illegal colony were on our land, and despite the presence of Israeli soldiers, one of the colonizers ran towards Ali and stabbed him in the heart,” Firas stated.

The Palestinians had to carry Ali for more than three kilometers to reach a nearby road before the medics rushed him to Yasser Arafat Hospital in Salfit, where he was pronounced dead due to his serious wounds.

A spokesperson for the Israeli police claimed, “It is unclear who stabbed the Palestinian,” and alleged that the police were “investigating the incident,” however, the police did not make any arrests.

The ministry said the 28-year-old, identified as Ali Hassan Harb, had been stabbed in the heart by a settler.

It is worth mentioning that, on May 14, 2021, Israeli soldiers killed his cousin, Awad Ahmad Harb, 27, in the same area.

The office of President Mahmoud Abbas called on the International Community to help end the escalating Israeli crimes against the Palestinian people, especially since these deadly violations are carried out without repercussions and are not only committed by the occupation soldiers but also by the illegal colonizers living on stolen Palestinian lands.

“We keep witnessing these crimes, and the international community fails to act. For example, we saw what terrorist colonizers did to the Dawabsha family in Nablus when they firebombed their home as they slept, burning the family  to death, including the 18-month-old Ali Dawabsha, and we also saw what the colonizers did to Mohammad Abu Khdeir, 16, in Jerusalem, when they kidnapped him and burnt him to death by dowsing him in fuel and pouring it down his throat before setting him ablaze….”

The president’s office called on the International Community to hold Israel accountable for its crimes and help establish a sovereign, independent, contiguous Palestinian state.

OTHER KILLINGS THIS MONTH: