You Are Here: Home → Israel killed 4 more Palestinians over the weekend 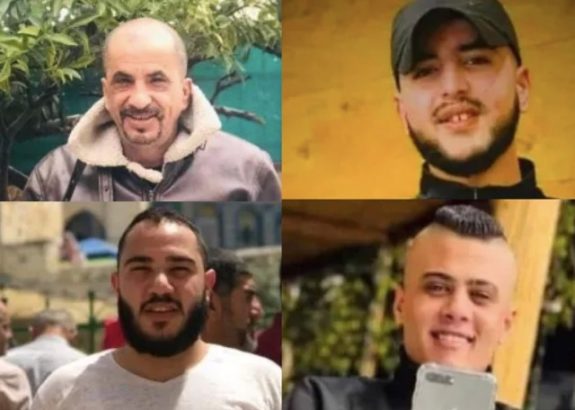 Israeli forces have killed more than 60 Palestinians this year, many of them in raids; meanwhile about 19 Israelis have been killed. Two reports on the latest deaths below:

Israeli forces have killed a 53-year-old Palestinian man near the separation barrier in Qalqilya city in the north of the occupied West Bank, according to Palestinian news agency Wafa.

The victims, identified as Nabil Ahmed Ghanem by the Palestinian health ministry, was shot dead on Sunday near the village of Jaljulia. He was a resident of the northern West Bank city of Nablus.

Wafa reported that Ghanem has been shot at while trying to cross the separation barrier. He was among the tens of thousands of West Bank Palestinians who regularly seek work in Israel.

An Israeli army spokesperson said forces had shot at “a suspect who vandalised the security fence”, which the Palestinians and many rights organisations have dubbed an “apartheid wall”.

The International Court of Justice at The Hague ordered Israel to tear the wall down after ruling it illegal. Nevertheless, the wall, which severely restricts Palestinian movements, remains.

Every day around 165,000 Palestinians cross with permits into Israel for work, according to the Palestinian workers union. Some have permits to work in Israel while others seek to cross without authorisation.

It is unclear whether Ghanem had the documents required to cross the checkpoints.

His body was taken by the Israeli authorities to the Meir Medical Center in Kfar Saba, Israel.

Undercover Israeli soldiers assassinated, on Friday dawn, three young Palestinian men, and injured nine, after the army opened fire at a car in an ambush in Jenin city, in the northern part of the occupied West Bank.

Eyewitnesses said the soldiers infiltrate the Eastern Neighborhood of Jenin city, ambushed a Palestinian car, and fired dozens of live rounds at it, killing the three young men in it.

The soldiers fired dozens of live rounds at the car and its surrounding area, wounding ten Palestinians, one seriously after he was shot in the neck and three who suffered moderate-to-severe wounds.

Thousands of Palestinians marched carrying the corpses of the three young men and chanted for ongoing resistance until liberation and independence.

The Israeli army claimed the soldiers chased the Palestinians and arrested them, adding that the two Palestinians carried two pistols.