You Are Here: Home → Israeli Soldiers Kill A Young Palestinian Woman Near Hebron 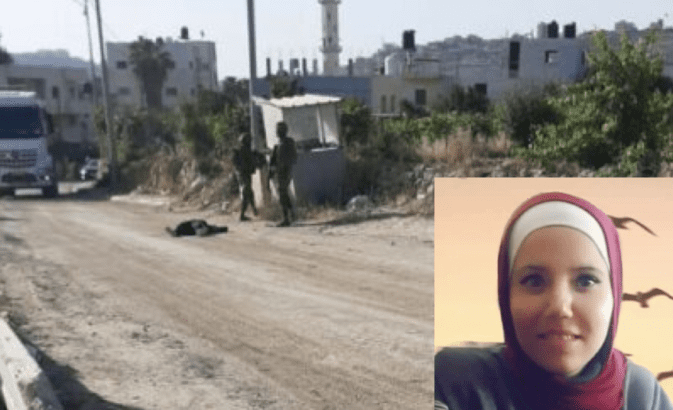 A journalism student, Ghofran Haroun Warasna was shot with a live bullet through the heart; Israeli soldiers blocked medics from attending to her until she bled to death. An eyewitness said the woman was walking to work when an Israeli soldier shot her near their military tower. She is the 55th Palestinian killed by Israel in 2022.

Israeli soldiers killed, Wednesday morning, a Palestinian woman at the entrance of the al-‘Arroub refugee camp, north of Hebron, in the southern part of the occupied West Bank.

Dr. Yousef Takrouri, the director of the Al-Ahli Hospital in Hebron, said the woman passed away before the medics could rush her to the hospital, adding that the doctors tried to revive her, but she succumbed to her serious wounds.

He also said the soldiers did not allow anybody to reach her and left her bleeding on the ground for twenty minutes before eventually allowing the Palestinian medics to reach her.

The slain young woman studied media and journalism at Hebron University and was active in documenting the Israeli military violations. In addition, she worked for at least three Radio stations in Hebron.

A few days ago, Ghofran started a new job at Dream Radio in Hebron and was on her way to work.

Her cousin, Yousef Warasna, said that he was heading to work in his car with his son, and was informed she was shot and killed.

An eyewitness said the woman was walking in the area heading to her work and did not attempt to attack the soldiers when they shot her near their military tower.

Palestinian Prime Minister Dr. Mohammad Shtayyeh condemned the Israeli crime and demanded the International Community act on prosecuting Israel for its ongoing and escalating violations against the civilians.

“This organized terrorism is encouraged by the absence of sanctions and punitive measures against the illegal Israeli occupation of Palestine,” he said, “The lack of punishment means another crime will be committed…”.

“The International Criminal Court sent forty investigators to Ukraine in less than two months,” Dr. Shtayyeh stated, “Yet, nothing has been done to prosecute Israel for its crimes that have been ongoing for decades.”

[Ghofran is the 55th Palestinian killed by Israel in 2022, while 17 Israelis have been killed this year.]

OTHER RECENT KILLINGS BY ISRAEL: