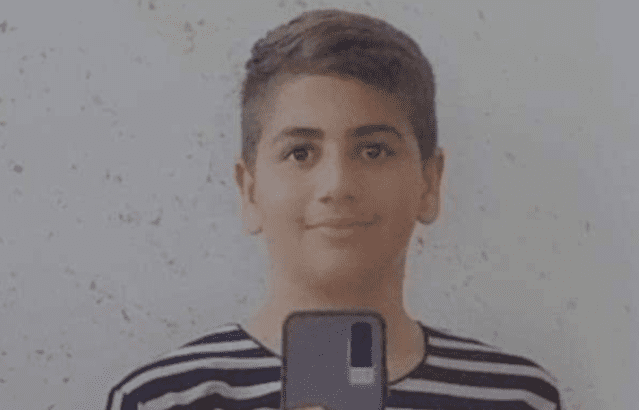 Zaid Mohammad Ghneim, 15 years old, was shot by Israeli forces with three bullets in his chest and back

Invading Israeli forces used lethal force yet again, this time opening fire on a group of boys who were throwing stones, and killing Zaid Mohammad Ghneim.

reposted from IMEMC, the International Middle East Media Center, May 27, 2022

Israeli troops shot and killed a Palestinian child on Friday while invading the town of Al-Khader, south of Bethlehem.

The child, Zaid Mohammad Ghneim, 15 years old, was shot by Israeli forces with three bullets in his chest and back and was taken to Al-Yamamah Hospital, south of Bethlehem, where he died of his wounds. [His name is also given as Zaid Mohammad Saeed Ghnaim, Zaid Mohammed Saeed Ghunaim, and Zaid Mohammed Ghonaim.]

Local sources said that when the Israeli troops invaded the “Umm Rokba” area in the town of Al-Khader, south of Bethlehem, they were met by local youth who began throwing stones at the soldiers to try to get them to leave their village.

Israeli troops responded with lethal force, shooting live ammunition at the children and teens, killing one, and wounding several others.

The killing of the 15-year-old child comes in the midst of an escalation of violence by Israeli forces, who have been invading Palestinian areas on a daily basis and firing live ammunition at unarmed Palestinians during their invasions.

Zaid was a ninth-grade student at Saeed Al-Aas Boys School in Bethlehem. He was the second student from that school to have been killed by Israeli forces in the past two months.

His father said that he was sitting with his son just hours before he was killed by the soldiers and added that Zaid was heading to his grandfather’s home when the soldiers shot him.

The Palestinian Minister of Education, Prof. Marwan Awartani condemned the killing of the student and called on human rights and international institutions defending children to put an end to these continuing Israeli crimes against students and education staff.

This killing of Zaid comes just two weeks after the brutal assassination of renowned Palestinian journalist Shireen Abu Akleh by Israeli forces in Jenin. Abu Akleh was killed execution-style by Israeli soldiers while standing with other journalists next to a wall, far from any clashes.

During the holy month of fasting and praying, Israeli forces repeatedly invaded the mosque area and assaulted worshipers.