You Are Here: Home → Sec’y Antony Blinken’s hypocrisy at Georgetown 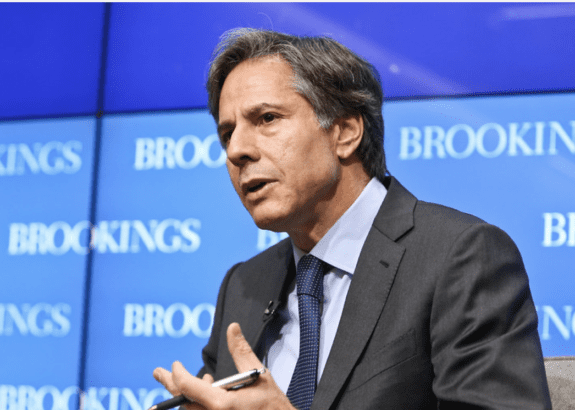 Nooran Alhamdan was enraged by Secretary of State Antony Blinken’s dismissal of the Palestinian struggle for justice.

Antony Blinken’s exchange with Nooran Abuhamdan at her Georgetown graduation was an insult to the cause of justice – but also a typical response to the Palestinian issue.

by Kathryn Shihadah, reposted from Palestine Home, May 30, 2022

On May 21, Nooran Alhamdan received her Master’s degree in Arab Studies from Georgetown University. She also exposed the hypocrisy of US Secretary of State Antony Blinken – a hypocrisy typical of individuals and states that pay lip service to the cause of justice.

A few weeks ago, Nooran – a Palestinian American – learned that Blinken would be delivering the commencement speech at her graduation; two days later, she heard that Israeli forces had assassinated Palestinian American journalist Shireen Abu Akleh (Abu Akleh’s death, and the debacle surrounding her funeral, were front-page news around the world).

Blinken tweeted about the incident: “We were deeply troubled by the images of Israeli police intruding into the funeral procession of Palestinian American Shireen Abu Akleh. Every family deserves to lay their loved ones to rest in a dignified and unimpeded manner.”

Blinken’s toothless tweet enraged me. There was everything wrong with American foreign policy vis-a-vis Palestine. Labeling the attack on Shireen’s funeral an “intrusion.” No statement that recognized her death as cold-blooded murder by Israel. An extension of Biden’s policies, which have done nothing to change the “status quo” since the Trump administration.

Palestinian students and activists in the United States are routinely blacklisted, smeared, and punished for their advocacy. However, honoring Shireen’s legacy, and taking advantage of this rare opportunity to make our voices heard in front of a high-ranking U.S. policymaker, was far more important to me than any personal risk I would face.

And she did indeed make her voice heard.

@georgetownsfs graduation is back to an in-person ceremony so why not a quick iconic protest moment involving a Palestinian student and @SecBlinken pic.twitter.com/N1Z73LuZbE

When Blinken stayed on for the handing out of diplomas, Nooran decided not to shake his hand or fist-bump; rather, she spoke to him as she passed:

“We demand an independent investigation of Shireen’s murder, and we demand an end to all American aid to the Israeli military now. Please.”

After the ceremony, Blinken approached Nooran and told her, “I see you. I hear you…We are committed to finding the truth.”

The Biden administration has rejected Amnesty International‘s and Human Rights Watch‘s fact-based reports on apartheid, has permitted more illegal settlement expansion than Trump, continued to favor Israel after an attack on Gaza killed 260 Palestinians (13 Israelis were also killed), blocked dozens of UN resolutions censuring Israel The list goes on – as do the human rights abuses.

Such indifference reveals a commitment, not to “finding the truth” about Israeli crimes, but to maintaining a “no daylight” toward Israel.

In this context, it is not surprising that the US government officially opposes an investigation by the International Criminal Court into Shireen’s death, and encourages the Palestinian Authority (PA) to share with Israel the bullet that killed Shireen Abu Akleh.

The truth will make you biased

The PA investigated the incident and concluded that Shireen had been deliberately killed by Israeli forces; a CNN investigation also found Israel at fault (eyewitnesses had insisted from the beginning that this had been the case).

In spite of the wealth of evidence supporting their conclusions, Israel’s foreign minister Yair Lapid told Blinken that both conclusions were “biased.”

Blinken did not push back, but rather encouraged Israel to find the “truth” and stressed America’s ongoing commitment to Israel’s “security.”

This is the same man who, during the Obama administration, engineered a massive military aid supplement (in addition to the standard $3.8 billion a year) to finance Israel’s brutal attack on Gaza – an attack in which over 2,000 Palestinians and under 100 Israelis were killed.

It is possible that Israel’s spin doctors, skilled in manufacturing justification for any Israeli crime, have already invented a narrative around the bullet that killed Shireen: Israel is somehow the victim of the incident, and violent, reckless Palestinians are the culprit.

If and when this becomes the official verdict, Israel’s defenders will no doubt breathe a collective sigh of relief.

Israeli criminality is well-known worldwide. Witness the hundreds of United Nations resolutions censuring Israel for human rights abuses, and multiple respected human rights reports labeling Israel an apartheid state. Yet for all this recognition, no state has stood up to Israel to demand justice for Palestinians.

Americans in particular – especially politicians – find it nearly impossible to forsake the viewpoint learned from Israel pundits: “Israel is our soulmate, Palestinians are terrorists.” Any narrative in which Israel is culpable must be “biased.”

Supporters of Israel long for closure on this incident, if only to prepare for the next one.

Kill, deny, repeat (and in fact, Israeli forces have killed at least five more Palestinians – two of them teenagers and one a woman – since Shireen).

Secretary Blinken’s exchange with Nooran Alhamdan is a textbook example of what most politicians, and most Americans, do when confronted with Israeli criminality.

Blinken claimed to be “committed to finding the truth”; Nooran responded, “We know the truth: [Shireen] was murdered by the Israeli military that we bankroll.”

But instead of honestly engaging, Blinken merely walked away. What else could he do?