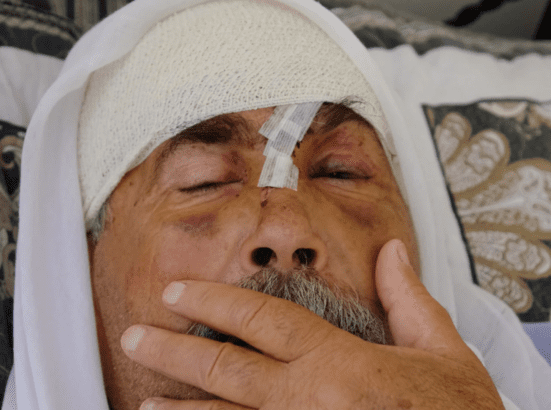 Raja Nevahin, seriously wounded during an incident of Israeli settler violence, at home in Hindaza for the Eid al-Fitr holiday this week.

Dozens of Israeli settlers swooped down in an act of violence on a Palestinian family tending its olive grove – throwing stones and beating them. Three Palestinians were wounded; the eldest remains hospitalized. When the family filed a complaint, they were interrogated for allegedly throwing rocks.

An elderly man is lying on an iron bed and covered with a synthetic blanket, in the living room of a stone house in a village outside Bethlehem. His eyes are closed, his face is a mask of pain, his head is bandaged, tubes protrude from his nose. He can barely speak, responding only with hand movements. Eating is nearly impossible because of fractures in his nose, eye sockets and skull. He has trouble sleeping and can’t stand without the support of his sons on both sides.

This is Raja Nevahin, a 70-year-old Bedouin who is a retired plasterer and a farmer, and the father of nine daughters and three sons, and this is his house. Last week, settlers from Ma’aleh Amos, a settlement in the eastern Etzion Bloc, south of Jerusalem, beat him with an iron pipe, wreaking havoc on both his head and arms. Since then he’s been hospitalized in the nearby town of Beit Jala.

This week, when we visited, he had been allowed to return for one day to his home in the village of Hindaza, in honor of Eid al-Fitr, which follows the end of the fasting of the holy month of Ramadan, before returning to the hospital for further treatment. Nevahin will need at least one more operation on his nose. One cannot but help feel compassion and deep concern when looking at him.

Two-and-a-half months ago, this column related how dozens of settlers attacked a 73-year-old shepherd, Mohammed Shalalda, on Mt. Qanub, not far from here. Now another aging farmer has been brutalized.

“Look! He’s going into my olive grove,” Ibrahim Nevahin, the wounded man’s brother, said suddenly, partly in fear, partly in resignation, but definitely not with anger. We were sitting on a rock on the slope of a hill that overlooks the valley. The houses and mobile homes of Ma’aleh Amos loom across the way, the homes of the village of Kisan, a few minutes’ drive from Hindaza, are behind us.

In the valley between the two communities a distant figure is seen descending slowly toward the Nevahin family’s olive grove.

“There he is, going down to my olives, he’s wearing green pants… I don’t know why he’s going there. Maybe he’ll chop down a few trees,” Nevahin says. “If I were to go down to my land now, he would whistle and summon his friends, the shabab al thilal – hilltop youth – like they did last week, and they would beat me and stone me.”

Since Tuesday, April 26, the Nevahims have been afraid to visit the land they own, some 50 dunams (12.5 acres) of it, which their father bought in 1957. Look, they say, here are the ownership documents.

The heat here on the threshold of the Judean Desert is rising, the olive trees are withering and need water, but no one dares to attend to them. This week, too, when we wanted to see the site where three members of the family were beaten and wounded, they were afraid to accompany us.

Finally, they agreed that Ibrahim, who’s 57, would drive us along the dirt path that descends to the grove, to see their plot of land from a distance. They were fearful of approaching it themselves and even of gathering a long way away from it.

After years of decent relations with Ma’aleh Amos, they say, last week’s incident has left them badly shaken. The assailants were not veteran residents of the settlement, the family maintains, but rather young people who live in the mobile homes that have sprung up on its fringes.

Kisan is also not far from the settlements of Nokdim and Tekoa and the archaeological site of Herodion. This is a truly biblical landscape. This week a panoply of Israeli flags flapping in the wind adorned local roads, in honor of Israel’s Independence Day, in a place where Israel has no legal sovereignty. But who cares?

Members of the Nevahin family, who own homes both in Kisan and Hindaza, waited for us on the highway wearing immaculate white galabias in honor of Eid al-Fitr.

On Tuesday, April 26, the two older brothers, Raja and Ibrahim, went with two of their sons and two of their grandchildren to their relatively young olive grove, in order to irrigate it by means of a system of pipes they had laid, spanning about 3 kilometers. Arriving at about 4 P.M., they were astounded to see a green mobile home on their land, which had apparently been erected overnight (it was later removed by Israeli authorities).

About 15 youths were lolling about inside, Ibrahim told us. “We go to the structure and I said: Hello, children,” he recalled in his inimitable Hebrew. “They told us: Get out of here, you sons of bitches. I said: You are sons of bitches. I want the police, I want the army. I asked them who was in charge of them.”

The youths pointed to a man of about 35 who was standing nearby. He asked Ibrahim who he was. “I told them that I am a friend of this land. It belongs to me. He said: You have three minutes to get out of here.”

Ibrahim replied that he was going to call the police, but had no choice but to back off. He quickly moved his older brother away and sat him down on a rock. “I sat down for about 3 or 4 minutes and looked at my olives with my back to the settlement. And then, God help us, 30 or 40 more people came down; they seemed to be 20 to 25 years old.

“As soon as they arrived they pepper-sprayed us in the eyes. They smashed my old brother on the head with an iron pipe. They opened his head. My son took my hand, my nephew hurried to his father, and the grandchildren were crying and shouting. I told the grandchildren: Run away – fast. I couldn’t see anything because of the pepper spray.”

It was while Ibrahim recounted the events of that day that he noticed a person descending toward his olive grove. The barking of a dog could be heard in the distance. He went on with his account: “They threw stones at us – oh, God. One volley of 50 or 60 stones. We got my brother to his feet and tried to take him with us, but I couldn’t help, because I couldn’t see.

“And then they hit me with two stones, one in the back and one above the eye. My son, Ali, who is 36, was hit in the forehead. Maher, my nephew, who is the same age, took a stone in the leg. Thank God the children were not hurt. Thank God they didn’t get to our grandchildren.”

Somehow the group fled to their car and rushed the wounded, chief among them Raja, who was bleeding seriously, to the clinic in the Palestinian village of Teqoa, from where an ambulance took them to the Al-Hussein Government Hospital in Beit Jala. From there Raja was transferred to the Bethlehem Arab Society for Rehabilitation, where he underwent surgery and has remained ever since.

A photograph taken while he was in the clinic, showing his bloodstained robe and battered face, is not easy to look at.

“I am clean,” Ibrahim told us. “In Israel’s computers, I and my father and my grandfather – we are all clean. You have to protect me. I am asking the government of Israel to help me get to my land. For me to be able to go to my land without them coming at me. Forty years we were their neighbors and there were no problems – ask in Ma’aleh Amos if we caused chaos there.

“But these kids, the hilltop youth… I am asking the government of Israel: Let me get to my land. Let me water my olives. I am telling every person in Israel: Protect your children like I protect my children.”

The following day, Ibrahim filed a complaint citing charges of causing injury and criminal trespassing, at the police station in the Haredi settlement of Betar Ilit. He shows us the pertinent document, Case No. 206129/2022. Two days later, he got a call from the same station ordering him and his son and his nephew to report for questioning about throwing stones at settlers.

A bitter smile crossed Ibrahim’s face as he spoke to us. “We were six and they were 60, and we threw stones at them?”

The three were interrogated and released on bail of 1,500 shekels (about $450); they had only 1,400 shekels, and the police made do with that. There is a chance that the trio will have to stand trial; the bail fee is meant to ensure that they show up.

According to Ibrahim, the police told them not to approach their groves until further notice. How long will that be, Ibrahim wanted to know. A week? A year? Ten years? All he wants is to water the trees before they wither and die.

The Israel Police this week offered this response to Haaretz’s query: “The crux of the incident in question involves a conflict over ownership of land, in which context both sides have submitted complaints to the police. Following their receipt, the police launched an investigation in order to get to the truth and both sides offered their versions of the incident.

“The investigation is ongoing and thus no further information can be revealed at this time.”

Meanwhile, in the Hindaza quarter which we visited later on, Raja lies helpless, eyes closed, surrounded by his family, groaning with pain.