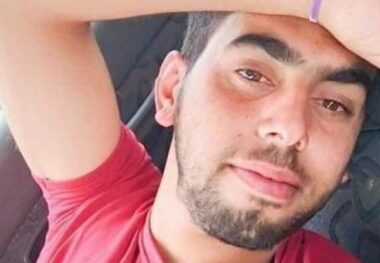 Soldiers shot Mahmoud Fayez Abu Ayhour, 27, from Halhoul town north of Hebron, with live rounds. The bullets perforated the diaphragm and severed the thoracic aortic artery, his heart, and lung.

On Thursday afternoon, Israeli soldiers invaded Halhoul town, north of Hebron in the southern part of the occupied West Bank, leading to protests before killing a young man and wounding five. The invasion led to protest before the soldiers fired dozens of live rounds, rubber-coated steel bullets, and gas bombs, killing a young man and wounding five.

He added that the bullets perforated the diaphragm and severed the thoracic aortic artery, his heart, and lung.

Dr. at-Tardi stated that the young man was rushed to the hospital in a profoundly serious condition and succumbed to his serious wounds during surgery.

The soldiers also shot two Palestinians with live rounds and one with rubber-coated steel bullets, in addition to two others who were shot with high-velocity gas bombs in their heads.

The slain young man’s uncle said Mahmoud wasn’t participating in the protests and did not pose any threat to the soldiers but was working at a construction site in the area when the soldiers started firing live rounds at random.