You Are Here: Home → Israeli Colonizers Attack Palestinian Man And His Son 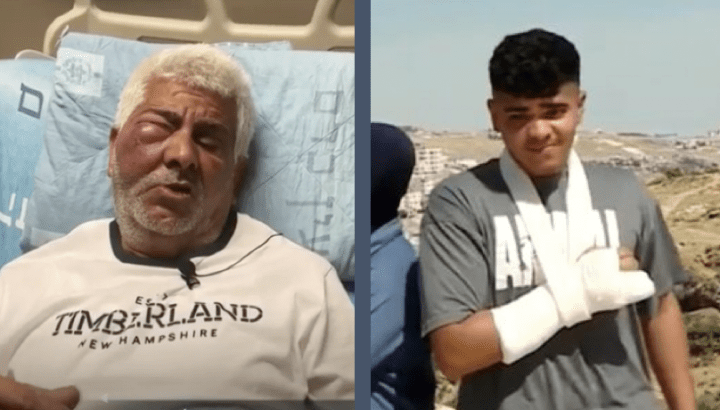 Riyad Somrain and his son Laith, after being attacked by Israeli settlers.

“Driving while Palestinian” can be hazardous to your health – if you find yourself surrounded by Israeli settlers. Riyad Somrain and his son thought they were about to die.

Three days ago, illegal Israeli colonizers ambushed and assaulted a Palestinian man and his son after forcing them out of their car in Silwan town in occupied Jerusalem, causing serious wounds.

“They dragged my son out of the car and assaulted him, that is when I stepped out and rushed to help my son, but within seconds they hurled a stone at my face, wounding me in the eye and face.”

“It is like they are from a different universe; their violence, hatred… our lives mean nothing to them,” Riyad said. “When they pointed their guns at us, we thought that is it; they are going to kill us.”

Riyad’s wife, Fida’ Somrain, said the colonizers attacked her husband and son, inflicting serious wounds to their faces, arms, and other parts of their bodies.

“My husband had a surgery in the face; the doctors placed a draining tube to remove the pus and fluids and will undergo another surgery within a few days for platinum implants in his jaw,” the wife said, “My son, Laith, suffered bleeding in the eye and fractures in the hands and will be undergoing surgery.”

IMEMC, the International Middle East Media Center, is a media center developed in collaboration between Palestinian and International journalists to provide independent media coverage of Israel-Palestine. It provides daily reports on events in the occupied territories. IMEMC was founded by the Palestinian Centre for Rapprochement between People in 2003. In 2021, IMEMC became a project of the American nonprofit organization If Americans Knew.