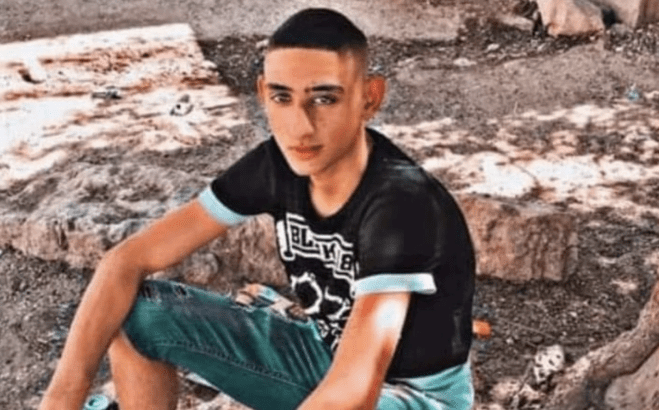 Odeh Mohammad Odeh was killed in the village of al-Midya, west of Ramallah in the Israeli-occupied West Bank.

Israeli soldiers shot Odeh Mohammad Odeh in the chest as he played with a group of friends. Odeh is the 16th Palestinian teenager to be killed by Israeli fire this year. So far, approximately 60 Palestinians and 17 Israelis have been killed in 2022.

Odeh Mohammad Odeh Sadaqa was shot with live ammunition in the back by Israeli forces around 4 p.m. on June 2 in the occupied West Bank village of Al-Midya, west of Ramallah in the central occupied West Bank, according to documentation collected by Defense for Children International – Palestine.

Odeh was walking with two friends about 100 meters (330 feet) from his home when Israeli forces deployed in the area opened fire on them. As they attempted to flee, Odeh was struck in the back with a single bullet that struck his heart and exited through his chest, according to information collected by DCIP. He was transferred to Ramallah Hospital in a private car where he was pronounced dead soon after arrival.

Odeh was walking to an area known as Waar Al-Bata, located about 100 meters away from his home where he and friends would sit. Palestinians in the area heard the gunshots and went to the area to help Odeh, but Israeli forces fired on them, according to information collected by DCIP. After about 20 minutes, they were able to reach Odeh and transport him to a medical center in the nearby village of Ni’lin.

There was no ambulance or doctor on duty at the medical center so they headed toward Ramallah Hospital.

About halfway to Ramallah, they met an ambulance that then rushed him to hospital. Odeh lost consciousness while in the car and doctors failed to resuscitate him upon arrival at Ramallah Hospital.

Odeh is the 14th Palestinian child shot and killed by Israeli forces in 2022, according to documentation collected by DCIP.

Israeli forces fatally shot a 17-year-old Palestinian in the occupied West Bank on Thursday, making him the fourth Palestinian killed by Israeli fire in 48 hours.

Odeh Mohammad Odeh was hit in the chest in the village of al-Midya, west of Ramallah, the Palestinian ministry of health said.

He arrived at the Palestine Medical Complex in Ramallah in critical condition, where he succumbed to his wounds.

Palestinian news agency Wafa, citing local sources, said Odeh was playing with a group of friends near the separation wall when they came under fire.

Translation: Emotional video of the farewell of the boy Odeh Mohammad Odeh, who was shot this evening by the occupation’s bullets in the village of Al-Midya, west of Ramallah.

Ragheb Sadaqa, head of Midya village council, said Odeh posed no danger to the soldiers who shot him and there were no confrontations at the time of his killing.

The 700-kilometre separation wall, built by Israel in 2002 for “security reasons”, is deemed unlawful by the UN’s legal body, the International Court of Justice (ICJ).

Earlier on Thursday, Israeli troops killed Ayman Mahmoud Muhaisen, 29, during a raid on a refugee camp in Bethlehem, in the southern West Bank.

On Wednesday, two Palestinians were shot and killed in separate incidents.

Bilal Awad Tawfiq Kabha, 24, was killed in a raid on Jenin city, in the north of the West Bank, late in the evening. In the morning, journalist Ghufran Warasneh, 31, was killed by Israeli soldiers on her way to a new job with local media.

IMEMC reports: “The Palestinians in the village confirmed that the fatal shooting of the child had no reason, especially since there were no protests in the area, adding that the soldier who shot him was apparently in one of the heavily fortified monitoring rooms of the illegal Annexation Wall.”

“His uncle Mofeed Sadaqa said his nephew tended to the family flock on their lands in an area not far from the Annexation Wall, adding that Odah was also playing with other children near the Wall when a soldier shot him in the back.”

The first moments following the shooting of Odeh Mohammad Odeh by the occupation forces in Al-Midya village, located west of Ramalla. The slain child was merely playing with his friends in the area when he was targeted by Israeli soldiers for no reason. pic.twitter.com/jpz1U7GWxB