You Are Here: Home → NYT: Palestinian life under Israel’s over half-century military occupation 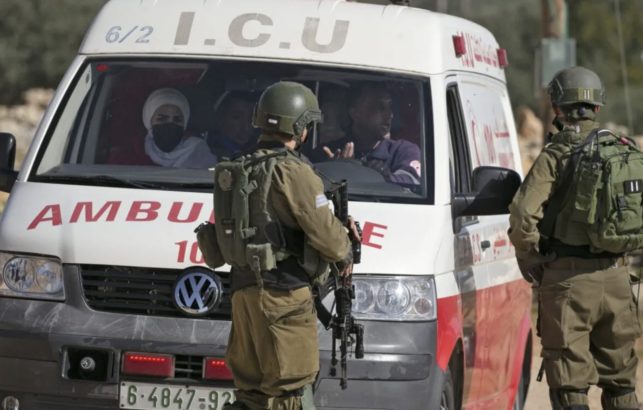 Palestinian health at risk: Israeli soldiers stop an ambulance in the town of Salfit, in the Israeli-occupied West Bank, on December 4, 2020. (photo)

It’s important to stop and take stock of how bad things have been for Palestinians in the West Bank… There is no study, no matter how rigorous, that can capture what it feels like for Palestinians living under Israel’s more than half-century military occupation…

This year, during the lead-up to the Israeli elections, I returned to my hometown, Nablus, in the occupied West Bank, to work on a research project and spend time with my family there.

I had received a grant to study the impact on Palestinians’ health of Israel’s restrictions on Palestinians’ movement — such as checkpoints, travel permits (including those required for medical care), the separation wall spanning the West Bank and road closures.

My previous work and the existing research done on Palestinian health and well-being gave me a good sense of what I would find: multiple burdens in access to health care and predictably high rates of depression, stress, anxiety and insecurity.

I expected to hear stories of struggle, loss and trauma. And I heard dozens of them, particularly among the young, who feel acute despair.

What I didn’t expect was that my trip would coincide with the deadliest month in the deadliest year for Palestinians in the West Bank since 2006: At least 150 have been killed so far in 2022, including more than two dozen children, almost all as a result of Israeli military violence. Or just how directly I would experience the day-to-day violence that defines the lives of Palestinians.

As talk swirls of even more severe crackdowns on Palestinians from the extreme right-wing coalition created by Benjamin Netanyahu, who is soon to be the prime minister of Israel again — and maybe even of the often predicted third intifada, or uprising — it’s important to stop and take stock of how bad things have already been for Palestinians in the West Bank — especially in 2022.

A few weeks into my trip, Nablus, a city of about 160,000, was blockaded by the Israeli Army in efforts to quell the Lion’s Den, a newly formed Palestinian armed resistance group based there. The city was effectively cut off from the rest of the West Bank — an occupied territory already cut off from the world in many ways — by the Israeli military, a closure that was not lifted until three weeks later.

This meant that all vehicles leaving or entering the city were subject to hours-long waits and searches (including, sometimes, searches of Palestinians’ phones and social media accounts) or denied access to leaving or entering the city entirely. This had devastating effects on the city’s economy and blocked access to health care, education and social gatherings, not to mention immeasurable stress and uncertainty among the city’s residents.

The closure of the city at a time of already escalating military and settler violence was an act of violence in and of itself, a part of the collective punishment that is consistently justified on security grounds but operates under the assumption that all Palestinians are potential threats and must be treated as such.

Palestinian youth have never known free movement or life without the constant and violent rule of the Israeli military. This is the context in which the Lion’s Den, which has claimed responsibility for several shooting attacks on Israeli soldiers, has arisen. Israel’s most recent clampdown on the West Bank, including the siege of Nablus, is in large part meant to dissuade popular mobilization around these groups.

The crackdowns meant that all Palestinians had to adjust even the most minute aspects of their lives to avoid settler violence and encounters with the Israeli military, which is stationed all around the West Bank.

During the closure, life for many living in and around Nablus was essentially put on hold as they waited for the Israeli government, an entity that Palestinians have no power to elect and that has no accountability to them, to make the decision to lift the closure and allow life to go back to some semblance of normal.

The closure happened during the beginning of the celebrated Palestinian olive harvest season, preventing many families, including mine, from gathering to pick their olives and subjecting those who dared to do so to an even greater risk of attacks from settlers.

Everyone I talked to in Nablus said these were the worst conditions they could remember for decades — since the second intifada in the early 2000s, for those old enough to remember it.

As I conducted a series of focus groups with doctors, nurses, patients and medical faculty members and students, it became clear that it was impossible for me to measure the extent of the damage caused by Israel’s lockdown. The unrelenting buzzing sound of Israel’s military surveillance drones, which patrolled Nablus 24/7 for weeks, for example — many people referred to it as a form of psychological torture. How can I measure that?

For one focus group, a public health faculty member arrived 90 minutes late, explaining that the road she tried to take to enter the city was blocked by a checkpoint, so she had to go a different way, recounting the experience as casually as someone might describe mistakenly putting on two mismatched socks. What does it say about a population’s psyche when events like these are normalized?

I have long felt a responsibility to convey the reality of the situation for Palestinians not only as a researcher committed to justice and equity but also as someone whose family hails from the West Bank. I was born in Nablus to a woman from a nearby village and a man from a Palestinian town that was enveloped by Israel upon its establishment in 1948.

My father taught journalism and political science in Nablus before he moved us to the United States, where I grew up. I’m now a professor myself, because I wanted to follow in his footsteps. I’m not a political scientist as my dad was; I’m a scholar of public health.

Of course, the two subjects are intertwined in any setting: Health is inherently political. But in Nablus, I was reminded of just how deep that connection is.

That context has remained, for the most part, much the same for the past 50 years, with periods punctuated by slightly more freedom for Palestinians and other periods that featured heavy restriction and violence. I visited family in the West Bank every summer as a child and for most of my adult life.

I remember the long, winding checkpoint lines, with hostile Israeli soldiers looking through our documents. I remember the electricity curfews imposed by Israel, leaving us to spend nights using only candles and lanterns. I remember being able to travel to the airport in Tel Aviv but having to switch taxis halfway through the journey to the West Bank because Palestinian taxis weren’t allowed to pick us up.

Now I and others of Palestinian descent, regardless of citizenship or country of residence, aren’t even allowed to use that airport without special Israeli permission. Instead, because Israel bombed the last Palestinian airport and won’t allow construction of a new one, we travel in and out of the West Bank through Jordan. (A lucky few have recently been able to fly out of an airport in southern Israel.)

The last night before I was scheduled to leave, Israeli military forces raided the old city of Nablus, killing five Palestinians and injuring at least a dozen more. For me, it was a sleepless night, knowing what was happening just minutes away.

The next day, after many panicked calls with a taxi company, which assured me it could get me out of the city, I left. Unlike Palestinians forced to live under these conditions every day, my time there had an end date. Now I am left to examine and analyze my data.

Yet I recognize that there is no study, no matter how rigorous, that can capture what it feels like for Palestinians living under Israel’s more than half-century military occupation, especially in moments like this.

Perhaps the biggest struggle in my role as a scholar, however, is in making recommendations about what to do. Sure, some extra mental health facilities would help people deal with the trauma. Increased use of telehealth appointments might reduce the need for many Palestinians to travel for care.

And yet none of these recommendations tackle the core barrier to Palestinian health, well-being and thriving. As a recent report on the mental health of Palestinians noted, “If the disease is political, then the solution also lies in the political: ending the occupation and eradicating the structures of repression and inequality.”

As international governments, media organizations and advocacy groups focus on the outcome of Israel’s recent elections, concerns over increased repression of Palestinians are valid, but they fail to fully recognize what took place just this past year.

We need to worry about what’s to come, but we also cannot ignore the violence and heavy mental health strain that has already corroded yet another generation’s well-being and hope for a stable and dignified existence.

The closure of Nablus ended shortly after my return to the U.S., and the almost daily killing of Palestinians has now slowed down, albeit slightly. [Unfortunately, this was a temporary pause.] Palestinians are back to what the rest of the world often calls relative calm but in reality are circumstances that no population can or should accept.

Looking only at physical well-being as it relates to the aftermath of shootings in the West Bank or bombing campaigns in the Gaza Strip flattens the experience of living, working, playing, raising children, going to school and trying to build a life in such an environment of uncertainty, trauma and violence.

One that has lasted for decades and may easily last decades more.

Yara M. Asi is an assistant professor at the University of Central Florida’s School of Global Health Management and Informatics and a visiting scholar at the FXB Center for Health and Human Rights at Harvard University. She was a 2020-21 Fulbright U.S. scholar in the West Bank.