You Are Here: Home → Palestinian father of 3 killed by illegal Israeli colonist in West Bank 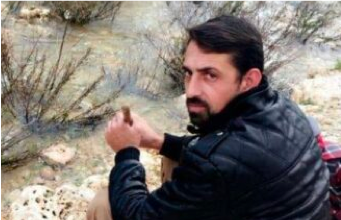 Tarek Ma’ali, 42, was the father of three. He was gunned down by an Israeli whose settlement – built on Palestinian land – is not even recognized by Israel. He is the 18th Palestinian killed by Israel this year.

On Saturday, an illegal paramilitary colonizer fatally shot a Palestinian man in the Jabal Ar-Reesan area, near Kafr Ni’ma village, northwest of the central West Bank city of Ramallah.

Israeli sources claimed the Palestinian exited his car and attempted to stab a colonizer before he shot and killed him.

The killing of Tarek Ma’ali occurred in the illegal Sde Ephraim illegal colonialist outpost near the Neria colony, built on stolen Palestinian lands.

The colonialist outpost, Sde Ephraim, is considered “unauthorized” by Israel because it was established without approval from the Israeli government.

Article 49 of the Fourth Geneva Convention states: “The Occupying Power shall not deport or transfer parts of its own civilian population into the territory it occupies.” It also prohibits the “individual or mass forcible transfers, as well as deportations of protected persons from occupied territory”.