You Are Here: Home → Israel and the threat of the Palestinian womb

Israel and the threat of the Palestinian womb 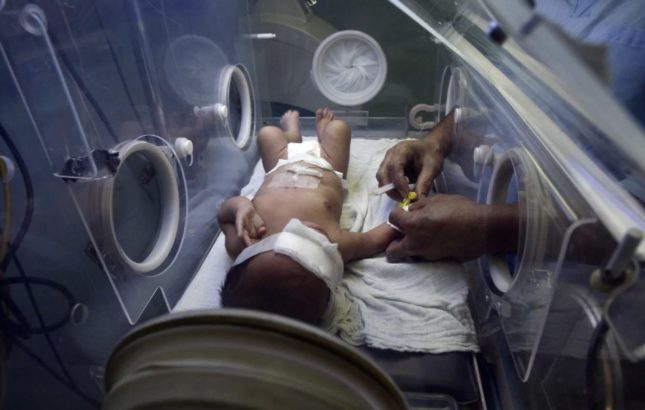 Israeli leaders – including the openly racist Ayelet Shaked – have been openly discussing strategies to slow Palestinian population growth. The Palestinian birth rate, higher than that of Israeli Jews, is a “threat” to the Jewishness of the state.

On Tuesday, I woke up to a shocking video sent by a colleague who works as a physician in the Naqab. The video, which was circulating widely on social media platforms and WhatsApp groups, showed Gideon Sahar, the head of cardiothoracic surgery at Soroka Medical Center ccin Beersheba, directing a question to Israel’s far-right interior minister, Ayelet Shaked.

“On the one hand, we understand that the birthrate is decisive – the Arab womb; and on the other hand, we encourage it with all the child allowances. That’s why I think we should consider a child allowance that is regressive: the first child receives one, the second child receives one, perhaps the third child; the fourth child does not, and the fifth child perhaps triggers a fine. We have to figure out something.”

Shaked responded that such a system would not work, citing her programme for fighting polygamy among the Bedouin community, wherein “westernisation” encourages women to have fewer children.

Sahar’s words have sent shockwaves through the Palestinian medical community inside Israel. A group representing Arab physicians in the Naqab has filed a formal complaint with the administration of Soroka hospital, expressing outrage at Sahar’s description of Palestinians and the “Arab womb” as “problematic”. A physician expressing such opinions cannot be trusted to treat Arab patients equally and should be fired, the complaint stated. Sahar has since apologised, and Soroka Medical Center said his comments “were made at a private event that is unconnected to his work and to his profession”.

Such comments seem to come straight from a fascist textbook, describing an entire population – one of a different race, ethnicity or religion – as problematic, and seeing its birthrate as a problem that needs punitive government intervention.

Tip of the iceberg

While many Palestinians living in Israel, or working in the Israeli healthcare system, are well aware of the racism surrounding us, we were still shocked by the vulgarity, confidence and ease with which these statements were publicly expressed by a head of a hospital department.

Such sentiments, which view another population as a ticking demographic bomb that must be treated and dismantled, contravene medical ethical codes of equality and anti-racism. Yet, his remarks are only the tip of the iceberg of a much larger, institutionalised form of racial superiority in Israel.

Governments around the world have a long history of politicising women’s wombs. While I was studying public health at Tel Aviv University, I was introduced to the concept of demographics and population control.

We learned of different global methods of increasing or decreasing population size, including the Chinese model, which aimed to manage population growth as part of the state’s industrialisation drive.

We studied Singapore, which as a poor country had a strict anti-natal policy, and then later as a wealthy nation encouraged women to have more children.

Poor countries, aware of their limited resources, have a motivation to try to decrease birthrates, while wealthy states, with a surplus of resources and shrinking, aging populations, have an incentive to do the opposite. This is all part of the biopolitics of governance, a topic of extensive debate that is beyond the scope of this article.

When my lecturer at Tel Aviv University discussed Israel, he said we faced a serious problem, with a relatively high birthrate of around three children per mother (almost double that of western Europe) in a small, wealthy country with an aging population.

This problem is compounded by the issue of “Aliyah”, which encourages Jews from all over the world to settle in Israel and increase its population size.

The elephant in the room was the Palestinian Arab population. How does a country so obsessed with racial statistics and with creating a permanent majority (and minority) in Jerusalem and elsewhere, and that encourages population growth and migration (of one specific type) on such a small piece of land, deal with having Palestinians comprise 20 percent of its population?

When the birthrate of Jewish mothers surpassed that of Palestinian mothers in 2018, it made national and international news. The punitive measures that Sahar so publicly advocates mark yet another attempt, in an openly racist country, to control the “problem” of an unwanted surplus population.

Harriet Washington, the author of Medical Apartheid, has chronicled in depth the shocking practice of the “Mississippi appendectomy”, wherein Black women in the southern US were subjected to involuntary sterilisation as they were seen unfit for reproduction – a practice that continued for more than a centrury after the end of slavery.

In my studies, I also learned about how American and European agencies have spent millions of dollars to reduce birthrates in Global South countries, where women are encouraged to have fewer children in order to better deal with poverty, environmental change and other problems.

When I tried to ask my lecturer whether we should also tackle the effects of global capitalism on environmental change and the looting of resources in the Global South by the Global North, I was quickly dismissed as being “too political”. We were talking about family planning, reproductive justice and safe access to abortions, I was reminded.

Such tropes and values operate within a system of racism and apartheid at a national or international level. They view certain populations – often poor, Black or Brown – as “problematic”, growing too fast and too much, and in need of intervention to decrease their size. Other populations, often wealthy and white, are viewed as superior, aging, shrinking, and in need of intervention to increase their size.

Still, Sahar’s words hit me and many others, well trained and experienced in dealing with racist people and ideas, as shockingly grotesque in their openly declared manner, and by the security, comfort and impunity in which they were spoken.

It is heartwarming to see a vibrant Palestinian community challenging attempts to silence them in an ongoing quest for accountability and justice. Yet, this is only a first step towards dismantling larger racist structures, wherein birthrates are obsessively monitored and the political environment allows statements such as Sahar’s to be tolerated.