You Are Here: Home → Israeli soldiers who allowed Omar As’ad to die did not have a momentary “moral failure” 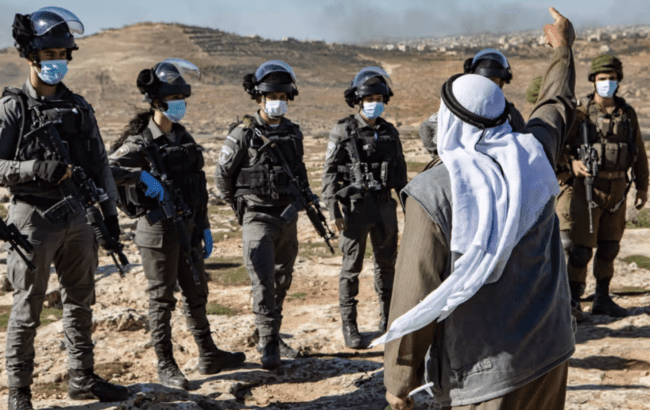 Israeli soldiers watch as Palestinians, accompanied by Israeli and international activists, demonstrate a week after Israeli troops shot Harun Abu Aram in the neck in the rural village of Al-Rakiz.

Israel is lying about its soldiers’ actions that night: this wasn’t a fluke – it was Israeli standard operating procedure.

Yet only just now has the Jewish State admitted a “lapse of moral judgment” on the part of its military.

Coincidentally, the single victim of aforementioned lapse happened to carry a US passport. Omar As’ad had lived for years in Milwaukee before returning to his Palestinian homeland about ten years ago.

Because he still looked Palestinian, the Israeli soldiers had no way of telling that he was more deserving of justice than ordinary Palestinians. They forced him out of his car in the middle of the night, and bound and gagged him unnecessarily. In spite of his advanced age and weight, he was forced to lie on the ground on his stomach in bitterly cold weather.

Forty minutes later, the soldiers found As’ad unresponsive, and fled the scene. If only they’d known he was a VIP.

American politicians, of course, called for an investigation of this American-involved incident – and they got one. In fact, the Israeli publication Ha’aretz reported that As’ad’s death “is emerging as one of the most serious incidents in the West Bank in recent years.”

Israeli defense officials acknowledged with chagrin that their soldiers had exhibited a “lack of humanity” towards As’ad and the other Palestinians they’d detained that night. The investigation concluded that the incident had been “serious and unfortunate,” and showed “a moral failure and a failure of judgment.” The report states that Israel’s military has a moral obligation to look out for prisoners’ welfare, and the soldiers had failed that night.

(Ha’aretz also reported that this particular battalion of Jewish Israeli soldiers has a reputation for being particularly hostile toward Palestinians.)

The investigation resulted in the a reprimand for the battalion commander and the removal of two lower level commanders from their positions. The two will be barred from holding commanding roles for two years. This is their punishment for allowing an innocent man to die.

Here’s the thing: Israeli forces have the blood of hundreds of West Bank Palestinians on their hands (thousands when the Gaza Strip is factored in). These Palestinians are of course not American citizens, so their deaths are generally not reported in mainstream media or investigated by Israel.

Human rights groups have revealed Israel’s brutality again and again (most recently, a third major organization has identified Israel as an apartheid state); alternative media have exposed thousands of incidents – to no avail.

Israel and the US seem to see Omar As’ad’s case as a one-off, but nothing could be farther from the truth.

The “lack of humanity” the Israeli soldiers exhibited on the night of As’ad’s death is the norm. Read the testimonies of some of the thousands of Palestinians detained, interrogated, and tortured (including children).

The “serious and unfortunate” behavior of three soldiers, their “moral failure and failure of judgment” that night – these are trademarks of the occupation, not an aberration.

Not only do Israeli soldiers violently mistreat Palestinians hundreds of times each week; they regularly block ambulances from reaching the Palestinians they have shot, often until the bleed to death; military leaders lie about their soldiers’ abuse.

When, occasionally, an Israeli soldier’s actions can’t be ignored, his punishment is lenient.

Omar As’ad’s death was not an isolated incident. American leaders need to take this opportunity to dig into the issues of the Israeli occupation of Palestinian territories and Israeli violence toward Palestinian bodies.