You Are Here: Home → Report: in 2020, Israeli human rights violations escalated against Palestinians 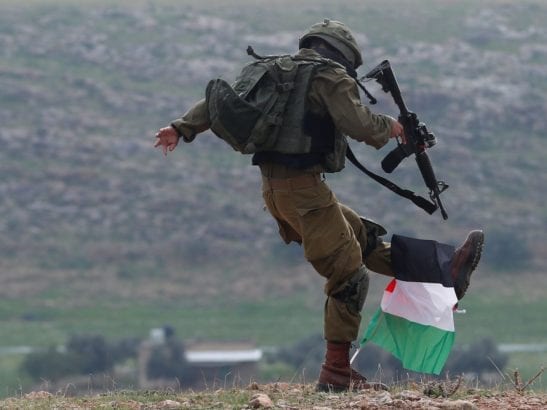 Palestinian human rights under attack in 2020 (Pictured: an Israeli soldier kicks a Palestinian flag in the Israeli-occupied West Bank, January 29.)

A new report from Palestinian human rights group Al-Haq details the numerous human rights violations that Israel perpetrated against Palestinians in 2020 — in the midst of the ongoing coronavirus pandemic.

2020 was a dismal year for human rights in Palestine, as Israel tightened its grip on the occupied Palestinian territory (oPt) through escalated attacks on Palestinians and their property and the introduction of new laws to further limit Palestinian rights, all in the midst of the COVID-19 pandemic.

A new field report from Palestinian human rights group Al-Haq released this week details the numerous human rights violations that occurred throughout Palestine, particularly in the occupied West Bank, during 2020 — violations that the group said were exacerbated by, and spurred on, by the ongoing coronavirus pandemic.

In the report, Al-Haq states that while Palestinians focused their efforts into combating the spread of the coronavirus in 2020, Israel “seized the opportunity to advance its settler project and intensify repressive measures against Palestinians in all their places of residence.”

Those repressive measures, the group says, included massive home demolitions, land confiscation, settlement expansion, and the violation of freedom of movement and the right to health, among other things.

Most “remarkable” of all the Israeli violations documented in 2020 , the group said, was the increasing frequency of demolishing Palestinian homes and structures.

According to Al-Haq, the number of Palestinian structures, both public and private, that were destroyed in 2020, in the midst of the pandemic, amounted to twice the average number of structures destroyed on an annual basis over the past 10 years.

In 2020, the group recorded the demolition of 535 Palestinian private and public structures, compared to an average of 325 demolished structures over the past 10 years (2010-2019).

Of the 535 structures destroyed in 2020, 248 of them were homes, the vast majority of which (242) were demolished under the pretext of lacking Israeli-issued building permits, which are notoriously difficult to obtain.

The other six homes were demolished on punitive grounds — a practice employed by the Israeli government against Palestinians accused of committing attacks against Israelis, and one that rights groups have characterized as “collective punishment.” Israel claims that punitive home demolitions “deter” future attacks, though that claim has been disputed by top Israeli security officials over the years.

Home demolitions in 2020 resulted in the displacement of 941 persons, of which 462 are women and girls, 442 are children, 267 are school students, and 124 are Palestinian refugees already displaced from their original homes, Al-Haq said in its report.

In the case of 69 home demolitions, Israeli authorities did not allow the home owners an opportunity to evacuate their belongings before the demolitions were carried out. Additionally, Al-Haq reported that members of 27 affected families were “violently harassed, attacked, or physically assaulted” during the demolition.

Israeli forces also carried out the demolition of four public structures, including a tent erected for sit-in protests against the Israeli occupation, the foundations of a school, one classroom, and the perimeter wall of a soccer playground that was still under construction.

Today, 500,000 Palestinian structures located inside the boundaries of the Green Line are still under threat of demolition. The UN recently reported that among the structures at risk, are 53 schools located across the West Bank.

Fifty-three schools are at risk of demolition across the #WestBank.

Over the coming days, we will join our partners in featuring some of those schools and their pupils. #SaveMySchool pic.twitter.com/vCg9vEazoz

As Palestinians were having their homes destroyed at alarming rates, Israeli settlers living illegally in the West Bank and East Jerusalem continued to benefit from Israel’s construction and planning policies. In 2020, Israel confiscated 20,030 dunums (4,949 acres) of land for settlement expansion throughout the OPT.

According to settlement watchdog Peace Now, 2020 saw the highest level of settlement construction plan approvals per year in the past two decades, with 12,159 housing units approved for Israeli settlements last year alone. In comparison, only 245 housing units, many of which already exist, were approved for Palestinians.

In addition to benefiting from the confiscation of Palestinian land, Israel settlers carried out significant amounts of violence against Palestinians in 2020, Al-Haq reported, saying that “of all other Israeli perpetrators, Israeli settlers committed the greater portion of violations.”

Al-Haq noted that a majority of the attacks were carried out in the Nablus district in the northern West Bank, with a significant number of attacks taking place in the Palestinian towns and villages that surround the notoriously violent and ultra-nationalist Yitzhar settlement.

In 2020, Israel human rights group B’Tselem documented 248 incidents of settler violence against Palestinians, including: 86 bodily assaults, in which 75 Palestinians were injured; 27 cases of stone-throwing at homes; 17 attacks on moving vehicles; 147 of the attacks were aimed at Palestinian farmers or their property, including 80 cases of damage to trees and crops owned by Palestinians, resulting in more than 3,000 trees vandalized.

B’Tselem noted that 72 instances of settler violence took place in the presence of Israeli soldiers, police officers or security personnel, who did not intervene to stop the assault on the Palestinians or their property.

“These violent acts could not take place without the sweeping support provided by the state,” B’Tselem said, adding that in 28 cases of settler violence, Israeli soldiers dispersed the Palestinian residents who were under attack by firing tear gas, stun grenades and rubber-coated metal bullets, at them. In five instances, live fire was used against the Palestinians, and at least 12 Palestinians were arrested during these altercations.

In addition to overseeing and promoting settler violence, Israeli forces themselves were responsible for the killing of 32 Palestinians in 2020, including nine children, Al-Haq reported.

According to Al-Haq, 11 Palestinians were killed in “peculiar circumstances,” including four Palestinian prisoners who were believed to have died inside Israeli prison as a result of medical negligence.

In 2020, Israeli authorities withheld the bodies of 18 Palestinians as part of its policy of withholding the bodies of slain Palestinians accused of committing attacks against Israelis — a policy that has been widely condemned by human rights groups as “cruel and without legal justification.”

By the end of 2020, Israel continued to hold the bodies of 69 Palestinians. One of those bodies is that of Ahmad Erekat, who Israeli authorities were accused of “extrajudicially executing” at a military checkpoint in June 2020, and whose case has drawn widespread international attention.

In an attempt to further entrench the policy of impunity that Israel exercises towards its soldiers who kill and injure Palestinians, a draft law was proposed in 2020 that would inhibit “the ability to hold to account soldiers who killed Palestinians during their military service,” Al-Haq said.

In addition to promoting the existing culture of impunity, the draft law “encourages [Israeli] troops to utilize force, in violation of international law, without any expectation of accountability,” the group said.

In addition to killings and home demolitions Israeli forces were responsible for perpetrating more than 1,000 other violations, Al-Haq reported, including arrests, confiscation of property, beatings, physical violence, and torture, among others.

“To further tighten Israel’s colonial grip, a draft law was submitted to suppress the Palestinian right to resistance against the Israeli colonial occupation,” Al-Haq reported, referring to a law that proposes legalizing the expulsion of the families of Palestinians who “carry out operations against the Israeli occupying authorities outside Palestine.”

“This is a more egregious form of collective punishment imposed by the Israeli occupying authorities on the families of those charged with carrying out operations against the Israeli occupation,” the group said.

Additionally, as part of Israel’s “unrelenting efforts to suppress the right to freedom of expression,” a draft law was presented to the Knesset, Israel’s parliament, that would see a provision added to the existing “Anti-Terrorism Law” prescribing a five year prison sentence for anyone who published or ‘likes’ a post on social media “supporting Palestinian rights and struggle for independence.”

While Israeli forces and settlers carried out the majority of human rights violations in Palestine in 2020, Palestinians’ rights were also under threat from their own government and authorities in the West Bank and Gaza.

According to Al-Haq, the Palestinian Authority (PA) in the West Bank and Hamas, the de facto authority in the Gaza Strip, perpetuated a number of rights violations “under the guise of the state of emergency” that was “unlawfully” declared at the beginning of the pandemic in March 2020, and has since been extended.

Palestinian authorities were responsible for numerous violations, including arbitrary detention; infringements on the right to a fair trial, right to humane prison conditions, and right to freedom of expression, Al-Haq said.

Ill treatment, torture, beating, physical violence, and confiscation of devices, funds, and equipment were also on the list of violations committed by Palestinian officials during 2020.

The majority of human rights violations perpetrated by Palestinian authorities were committed by the police in the West Bank (106) and in the Gaza Strip (155); Preventive Security forces (159); Internal Security forces (148); and the General Intelligence (66), Al-Haq reported.

Palestinian officials have long been accused of widespread corruption and have been criticized for quashing dissent, both in the West Bank and Gaza. Dozens of Palestinian citizens, mainly youth, have been arrested and tortured by the PA over social media posts critical of Abbas and his regime in recent years.