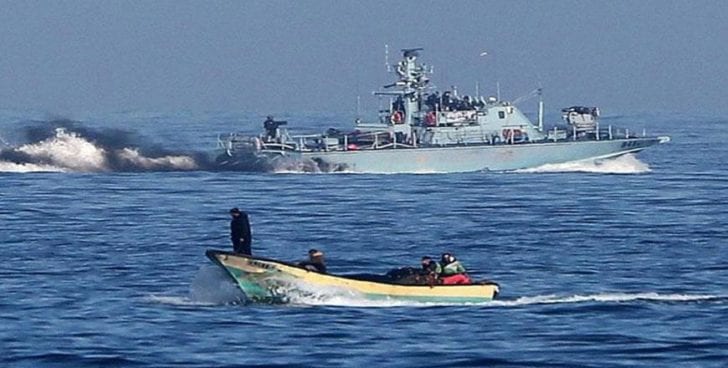 Intimidation and ever-present danger: Gazans are fishing inside the maritime boundaries, as an Israeli navy ship watches, July 2017.

An explosive Israeli drone, caught in Gazan fishermen’s net, proves it once again: “fishing while Palestinian” can be lethal.

NOTE: Fishing in Gaza, which used to be lucrative, has become both dangerous and difficult under Israel’s hostile blockade. As Kathryn Shihadah reported:

The Oslo Accords, an agreement signed by both Israel and the Palestinian leadership in 1993, places Gaza’s fishing perimeter at twenty miles offshore…In the twenty-seven years since Oslo was signed, Israel has rarely allowed fishing beyond twelve nautical miles.

One organization cataloged twenty changes in the fishing boundaries in 2019 alone – four of those were complete closures. At times, fishermen don’t know where the boundaries are until Israeli soldiers start shooting at them.

As Israeli leaders have made clear time and time again, the expanding and contracting fishing boundaries are an attempt to punish all of Gaza for the “transgression” of the few who dare to stand in defiance of Israeli oppression. In reality, international law recognizes the right of an occupied population to resist its occupier, including via armed resistance.

Zakaria Bakr, head of the Fishermen’s Union in Gaza, explains another Israeli policy that adds insult to injury: Israel’s blockade, now in its thirteenth year, “bans almost everything we need to maintain our boats,” including engines, spare parts, fiberglass, and rope. Fishing boats that escape confiscation and gunfire are still vulnerable, and half of Gaza’s registered fishermen are unable to go out because their boats are in disrepair.

Israel has been censured by countless human rights groups and hundreds of United Nations reprimands over its human rights abuses of  Palestinians in Gaza. One troubling UN report warned that unless Israel changes its policies, Gaza would become “unlivable” by 2020. B’Tselem pointed out that “rather than change its policies…Israel has made them stricter and the situation has deteriorated,” adding that “Israel could change this stifling reality right now. Instead, it chooses to force Gaza residents to live in a state of poverty, stagnation, and hopelessness.”

As is the reality with most elements of Palestinian life under Israeli occupation, the greatest challenge in Gaza’s fishing industry is not the weather, or fluctuations in the market – it’s simply living to fish another day.

Booby-trapped Israeli drones exploded and led to the death of three Palestinian fishermen in the southern Gaza Strip on Sunday, findings of an investigation by the enclave’s Ministry of Interior revealed today.

In a press conference to outline the outcomes of the report into the deaths, ministry spokesman Iyad Al-Bazm said the men were killed by occupation forces off the coast of Khan Yunis, in the southern Gaza Strip.

Al-Bazm explained that occupation forces had used “drones carrying high-explosive devices” in an operation against resistance naval forces on 22 February, adding: “On the morning of March 7, two drones were suspended in the nets of two fishing boats in the sea off Khan Yunis [in Gaza].”

The fishermen handed the first drone – Matrix 600 quadcopter – to Maritime Police, they later found a second had stuck to their nets. The investigation found that this had exploded and led to their deaths.

Al-Bazm added that when inspecting the intact helicopter that was recovered by the fishermen, it was found that it had an explosive device attached to it. The pieces of the wreckage and the metal pieces that were found at the site of the explosion were then compared to the intact drone and it was found that they were identical.

On behalf of the Ministry of Interior and National Security, Al-Bazm paid his respects to the families of the three martyrs; Muhammad Hijazi Al-Laham, Zakaria Hijazi Al-Laham and Yahya Mustafa Al-Laham, two brothers and a cousin.

He called on all international institutions and bodies to work to provide protection for Palestinian fishermen in the sea off the Gaza Strip, highlighting that they are constantly exposed to attack at the hands of occupation forces.

The three were killed on Sunday after a blast ripped through their boat off the Gaza shore. The Israeli military has previously said it was not involved in this incident.

To see a list of all Palestinians and Israelis killed by each other since 2000, visit Israel-Palestine Timeline.