You Are Here: Home → The facts: Israel and Saudi Arabia are not U.S. allies

The facts: Israel and Saudi Arabia are not U.S. allies 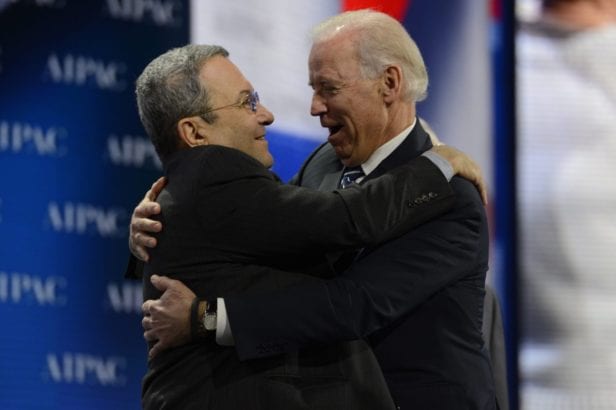 What these claimed “allies” want from the U.S. is greater than what the U.S. wants, needs, or gets from them. Whenever a relationship seems to be falling back into a pattern of false alliance, they should ask what Bill Clinton asked rhetorically of his aides after a meeting with Israel’s Benjamin Netanyahu: “Who’s the fucking superpower here?” Then they should ask of the other government, “What have you done for the United States lately?”

The United States never has had any alliance commitments in the Middle East — either multilateral alliances such as NATO and the ANZUS treaty or bilateral security pacts such as those with Japan and South Korea. That’s a good thing, given the mélange of regional rivalries and conflicts and their tendency to spawn wars. U.S. lethal involvement in the Middle East has been bad enough even without any alliance commitments to fulfill.

The closest the United States ever came to such a commitment was with the formation in 1955 of the Baghdad Pact, later known as the Central Treaty Organization. The United States was the chief promoter of that alliance, although it never became a member because, according to then-Secretary of State John Foster Dulles, opposition by the Israel lobby made ratification in the Senate doubtful. A coup in Iraq, a Turkish invasion of Cyprus, and a revolution in Iran killed CENTO by the end of the 1970s.

Despite the absence of U.S. alliance commitments, discourse about U.S. policy in the Middle East routinely refers to “allies” (and sometimes the slightly milder term “partners”). The terms are used not just as sloppy description but as strategic prescription, with the assumption that the United States should give special deference or consideration to “allies” in the region.

Admittedly, there is some possible basis for speaking of an ally even in the absence of a mutual security treaty. But legitimate use of the term still should reflect several conditions. One is mutuality of interest that goes markedly beyond the norm. Another is reciprocity, in which the United States gets as much from the alliance partner as it gives in return. Yet another is that what the partner gives in recognition of its special relationship with the United States is above and beyond what it would be doing anyway in the absence of that relationship.

Most references to “allies” or “partners” in American discourse about the Middle East do not reflect these conditions. Many such references merely reflect the affinity of whoever is speaking or writing for the country or regime labeled as an “ally.” Many other references reflect inertia — they are the legacy of past circumstances that once caused a country to be considered an ally, notwithstanding how much circumstances have changed in the interim.

Saudi Arabia demonstrates the legacy effect. The specific legacy in question is that of a meeting on a warship in the Suez Canal in 1945 between President Franklin D. Roosevelt and King Ibn Saud, when the United States was concerned about securing its post-World War II oil supplies. The fracking revolution and much else have greatly changed the relevant circumstances in the intervening 76 years, but the habit of talking about Saudi Arabia as an “ally” or “partner” endures.

Donald Trump — ironically, given how much he dissed NATO and left U.S. relations with many true allies in tatters — carried to an extreme the special deference to certain non-allies in the Middle East. His first overseas trip as president was not, as with many other U.S. presidents, to neighbor and fellow NATO member Canada, or to neighbor and fellow Rio Treaty member Mexico. Instead, it was to Saudi Arabia and Israel. He followed that by showering the Israeli government of Benjamin Netanyahu with multiple unreciprocated (to the United States, that is, not to Trump) gifts and running interference for the Saudi regime even when it gruesomely murdered a U.S.-resident journalist. Far from putting America first, this was putting the Saudi and Israeli regimes first.

It was clear that President Joe Biden would take a different approach toward Saudi Arabia, which during the campaign he had labeled a “pariah.” And the public release, in compliance with U.S. law, of an intelligence assessment linking Saudi Crown Prince Mohammed bin Salman to the murder of aforementioned U.S.-resident journalist Jamal Khashoggi has stimulated new discussion about the Saudi-U.S. relationship.

But even the Biden administration’s policy toward the Riyadh regime, though markedly different from Trump’s, still exhibits old habits. The administration is not penalizing the crown prince directly despite his probable ordering of the murder because, according to the New York Times account of administration thinking, the cost of a “breach, in Saudi cooperation on counterterrorism and in confronting Iran, was simply too high.” If even a grisly act of international terrorism such as the slaughter of Khashoggi is partially tolerated in this way, then it is hard to see what has been gained for counterterrorism.

And if “confronting Iran” was part of the calculation, this confuses means with ends and conflates U.S. interests with regional state ambitions. Ask how Iran threatens U.S. interests — a question asked all too infrequently — and the answer is likely to focus on damage done to an “ally” like Saudi Arabia or to U.S. overseas deployments in support of “partners” or “allies,” rather than any Iranian threat to core U.S. interests. The “allies,” in short, are at least as much a cause of Iran being a policy problem as they are a solution to the problem. Nobody needs to motivate the Saudi regime to be confrontational toward Iran.

And if, despite that current Saudi attitude, the Saudi regime were to respond to a new U.S. policy by dialing down the confrontation and moving toward a cross-Gulf détente — which Iran itself has proposed — that would make the Persian Gulf region a less dangerous and less unstable place. Such a change would be very much in U.S. interests, reducing the likelihood of the United States being swept up in more Middle Eastern warfare. The United States should applaud, not bemoan, any such development.

Israel’s status as a supposed “ally” is sustained not only by habit but by well-known domestic politics in the United States. The notion of such an alliance most often is just assumed and invoked without justification. The more careful attempts to justify it usually focus on Israel’s admirable accomplishments and strengths in technology and economic development. But to the extent the United States benefits from any of that, it can continue to benefit through a normal, healthy, cordial relationship with Israel. It does not need to feed an extraordinary relationship with special favors that bring the United States no net benefits, including billions of dollars in subsidies to an already wealthy country (with a GDP per capita comparable to that of France or Britain), and vetoes at the United Nations Security Council to provide diplomatic cover to the Israeli occupation of Palestinian territory.

None of the criteria loosely cited to identify allies and distinguish them from adversaries justifies the customary line-up of Middle Eastern “allies.” The criterion of democracy and political rights doesn’t. Not with a completely undemocratic family-run Saudi regime that has become even more autocratic under the rule of MBS. Not with an Israel that defines itself by law in ethnic/religious terms at odds with the principles of American democracy and that denies political rights altogether to a large subjugated population.

Neither does a criterion of who is, or is not, destabilizing the region. Not with a Saudi Arabia whose aerial assault turned Yemen into a humanitarian disaster and that tried to foment a governmental crisis in Lebanon by holding that country’s prime minister hostage until he announced his resignation. Not with an Israel that has initiated offensive military operations against at least four other countries in the region.

The same goes for any criterion based on support for U.S. diplomacy — not when the “allies” in question have been actively trying to sabotage one of the most important U.S. diplomatic initiatives relevant to the region.

Deal with everybody, coddle nobody

Rather than basing its policy toward the Middle East on a division between good guys and bad, the United States can best uphold and advance its interests through engagement with every regime in the region, unfettered by arbitrary labels of ally and adversary.

Doing so permits straightforward addressing of the bilateral differences that always exist, even with those commonly labeled “allies.” Doing so also permits building on any parallel interests, which always exist even with adversaries.

Nearly all the supposed benefits of purported “alliances” would endure with normal relationships and a U.S. policy of all-azimuths engagement, mainly because of what other countries do in any event on behalf of their own interests. Counterterrorism is an outstanding example. Counterterrorist cooperation between the United States and other countries throughout the world — the kind of behind-closed-doors cooperation, between security services, that matters most — often does not mirror the temperature of overt political relationships. Valuable cooperation has taken place not only with allies (whether real or purported) and with states having neutral relations with the United States, but also with states commonly labeled as adversaries. This should be unsurprising, given that many of the same jihadist groups and individuals that have been of concern to the United States also worry those other states.

The notion that current “allies” need to be coddled lest they run into the arms of China or Russia is not valid. The “allies” will do business with those other powers anyway when they see such business as in their interests — as both Saudi Arabia and Israel have done — regardless of the supposedly special nature of their relationship with the United States. Moreover, the attractiveness of doing business with the United States will remain without the coddling, as is true of Saudi choices regarding arms purchases, given that their defenses have been built largely around U.S. hardware.

What the “allies” in the Middle East want from the United States is greater than what the United States wants, needs, or gets from them. U.S. policymakers should keep this asymmetry in mind. Whenever a relationship seems to be falling back into a pattern of false alliance, they should ask what Bill Clinton asked rhetorically of his aides after a meeting with an especially brash and insistent Benjamin Netanyahu: “Who’s the fucking superpower here?” Then they should ask of the other government, “What have you done for the United States lately?”

Paul R. Pillar retired in 2005 from a 28-year career in the U.S. intelligence community. His senior government positions included National Intelligence Officer for the Near East and South Asia, Deputy Chief of the DCI Counterterrorist Center, and Executive Assistant to the Director of Central Intelligence. He is a Vietnam War veteran and a retired officer in the U.S. Army Reserve. Dr. Pillar received an A.B. summa cum laude from Dartmouth College, a B.Phil. from Oxford University, and an M.A. and Ph.D. from Princeton University. His books include Negotiating Peace: War Termination as a Bargaining Process (1983), Terrorism and U.S. Foreign Policy (2001), Intelligence and U.S. Foreign Policy: Iraq, 9/11, and Misguided Reform (2011), and Why America Misunderstands the World: National Experience and Roots of Misperception (2016). He is currently a non-resident Senior Fellow at the Center for Security Studies of Georgetown University.