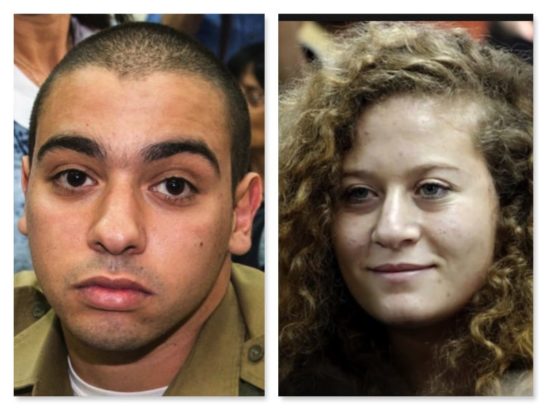 IDF Sgt. Elor Azaria, who shot dead a disarmed and injured Palestinian attacker in the West Bank city of Hebron in March 2016, and Ahed Tamimi, dubbed by some the Palestinian Ghandi.

Elor Azaria took the life of a man who was no threat, received a hero’s welcome, a reduced charge, and a lenient sentence. The Prime Minister of Israel called for his pardon because he and his family had been through enough. His sentence has been reduced to 9 months, though he shows no remorse for what he did.

Contrast Ahed Tamimi, who slapped an IDF soldier in full armor (after Israeli soldiers had shot her cousin in the face), was charged with assault and a multitude of other crimes, and has just reached a plea bargain that will give her a total prison time of 10 months.

Ergo, slapping a soldier is about as bad as killing a Palestinian.

Elor Azaria, the Israeli soldier convicted of shooting and killing a Palestinian in the head while the Palestinian was lying on the ground wounded, had his sentence reduced to nine months by an Israeli judge this week.

Last February, Azaria was sentenced to eighteen months for the 2016 killing, which was captured on camera by a bystander. He began his prison time in August 2017. With the new sentence reduction, he will be released in May.

The Chief Military Prosecutor for Israel, Sharon Zagagi Pinhas, opposed the granting of parole for Azaria, saying that he has shown no remorse for the murder of a prone, wounded man. During Azaria’s trial, the prosecution had pushed for a sentence of 3 – 5 years for the murder.

This contrasts with the Israeli military prosecutor’s stance toward Palestinians – children who throw stones at invading soldiers are given a mandatory four-year prison sentence.

After the early release of Azaria was announced, Israeli conscientious objector and editor of +972 Magazine, Haggai Mattar, said on Twitter that when he is released in May, Azaria “will have served a shorter sentence than me and my friends who refused to serve in the army of occupation”.

Azaria’s case garnered national and international attention, and Israeli Prime Minister Binyamin Netanyahu was among those who called for the soldier’s early release.

The graphic video of the murder committed by Azaria in March 2016, which was filmed by a Palestinian cameraman from B’Tselem Israeli human rights group, went viral and sparked international rage.

The footage shows Abdul Fatah al-Sharif lying on the ground after having been shot ten minutes prior, when Azaria comes up to the wounded man and shoots him in the head at close range, killing him.

In the video, Elor Azaria is seen talking on the phone, then hanging up and stepping closer to Al-Sharif, and then shooting him in the head from a very close distance in the presence of Israeli ambulances. (WARNING: DISTURBING)

Palestinian teen Ahed Tamimi reached a plea bargain with military prosecution on Wednesday, according to which she will spend eight months in prison.

As part of the deal, the 17-year-old is expected to plead guilty to four counts of assault, including the videotaped slapping of an Israeli soldier.

The deal still must be approved by the military court, and is not final.

Tamimi has spent three months in detention so far.

The court has approved plea bargains for Nur and Nariman Tamimi, Ahed Tamimi’s cousin and mother, both of whom were involved in the videotaped soldier-slapping. Nur Tamimi agreed to a suspended sentence of five months. Nariman Tamimi will serve eight months in prison for participating the assault.

The decision was made in a hearing held today in Tamimi’s trial, which is being conducted behind closed doors. The military court rejected an appeal she made this week to hold the trial in public.

Tamimi’s lawyer, Gaby Lasky, confirmed that a plea agreement has been reached. “The fact that the plea agreement provides for the dropping of all of counts of indictment that made her detention possible until the end of legal proceedings possible is proof that Tamimi’s arrest in the middle of the night, and that the legal proceedings against her were steps designed to settle scores,” Lasky said.

Sources told Haaretz that according to the plea bargain, Tamimi will be charged with the assault that was videotaped in December, the resulting incitement to violence through the posted video, and two other assaults on soldiers. She will not be charged of additional assaults or stone-throwing, which appeared on the original indictment.