You Are Here: Home → Taylor Force Act about to sneak through Congress, perpetuating oppression of Palestinians

Taylor Force Act about to sneak through Congress, perpetuating oppression of Palestinians 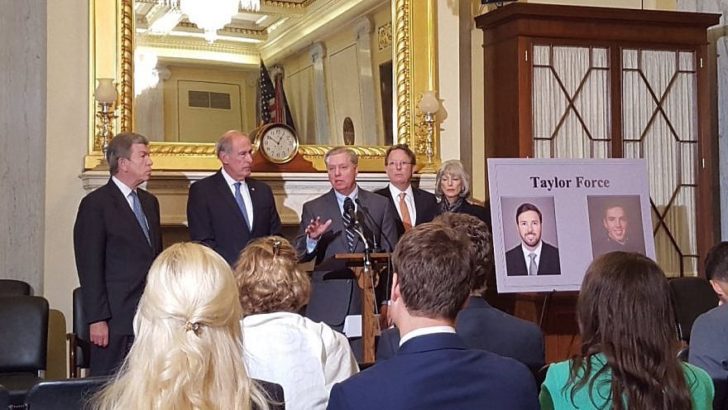 The Taylor Force Act will probably become law by the end of the week, perpetuating two tragedies: Palestinians will continue to be seen as terrorists, unworthy of food and shelter; and Israel will continue unabated in spending American money to kill and imprison them.

The Taylor Force Act, which has been working its way through Congress since February 2017, is likely to become law this week, tucked away inside an omnibus spending bill that, if it fails to pass, will result in government shutdown.

The bill (HR1164, S 1697), named after Taylor Force, a young man who was killed by a Palestinian in Tel Aviv in March 2016, is designed to withhold economic assistance to the Palestinian Authority until it stops “making payments to terrorists in Israeli prisons and to the families of deceased terrorists.”

The alleged “pay-to-slay” practice is widely condemned in both houses of Congress because it supposedly incentivizes terrorism.

However, this interpretation of the Palestinian Authority policy is based on a nearly universal misunderstanding of the program, which presupposes Palestinians to be terrorists with a death wish, rather recognizing that they are people who embrace life like everyone else.

In fact, when viewed in its proper context, the Palestinian Authority is providing a valuable social program, not a rebel recruitment tool.

In the US, the family of a service member killed in the line of duty receives a one-time payment to help surviving members deal with financial hardships connected with the loss of their loved one. This “death gratuity” is currently $100,000.

Israel too has a compensation program for families of IDF soldiers killed or injured in the line of duty.

The Palestinian Territories, however, have no official armed forces; their resistance against the occupation is carried out by civilians. In the event of their death, injury, or imprisonment their families still face financial struggles. The Palestinian Authority provides for them through the fund that Congress is trying to bring to an end. (For more detail on the Taylor Force Act, read this and this.)

The fund, which had a budget of $170 million in 2016, makes monthly payments to about 35,000 Palestinian families – averaging under $400 a month. This helps children go to school and get food and medical care in the event the family breadwinner is imprisoned or killed.

A massive number of Palestinians – 800,000 since the beginning of the occupation, mostly men – are also detained by Israel as political prisoners; thousands of others have been killed or injured by IDF soldiers. Their families too need assistance.

Without this social safety net, many Palestinian wives, mothers, and children would be at risk of homelessness and starvation.

Our Congress has been given an explanation of how the program works, but refuses to accept it: Senator Blunt (R-MO) declared recently, “This is not a welfare system, but a so-called martyr system and we shouldn’t allow the killers and ruthless attackers to be recognized as martyrs in a system that we are part of.” Senator Cotton (R-AR) added, “The taxpayers’ dollars will no longer go to subsidize the murder of American citizens and Israeli citizens.”

Senate Minority Leader Chuck Schumer, self-proclaimed “guardian of Israel” (not of the United States) promised to do “everything possible” to help get the Taylor Force Act through, preferably by unanimous consent.

Those members of Congress with a modicum compassion (and, perhaps, a wish to prop up the Palestinian Authority?) have insisted that some money for the Palestinian Authority stay in the budget: Rep. Eliot Engel (D-NY) pushed for $37 million in assistance for water treatment (a compromise of $5 million was reached); others fought to keep $500,000 for vaccinations for children and a fund for the East Jerusalem Hospital Network.

The US currently provides about $260 million a year in Palestinian aid. None of this money goes directly into the hands of the Palestinian Authority, but rather funds NGO programs that assist Palestinians. The US also pays out $50 – $100 million each year to Palestinian security forces, which work with Israel to “maintain security” in the West Bank – i.e. clamp down on Palestinian resistance forces.

The noteworthy – and unspoken – other side of the coin is American aid to Israel, which continues unimpeded, regardless of Israel’s actions. $10 million a day flows out of our coffers to bankroll Israel’s illegal occupation and blockade, its high-tech wars against the unarmed population of Gaza, and ongoing human rights abuses.

The great irony of this military aid to Israel is that this massive amount of money supports the occupation, which directly contributes to the Palestinians’ economic hardship and desperate need for American aid. The occupation imprisons Palestinians, weaponizes the IDF to shoot and kill, and drives young men occasionally to the hopelessness that turns them to violence. The circle is complete when the US ignores the financial hardship it helped create, and defunds aid through the Taylor Force Act.

Is this good for us?

As I wrote when the Taylor Force Act was newly minted:

The Foreign Assistance Act, which “prohibits…assistance to any country which engages in a consistent pattern of gross violation of internationally recognized human rights,” sounds like it can be applied to Israel. Why are we forking over $10 million a day, $3.5 billion a year, to the Israeli government?

The answer is in the fine print of the Act: “except when extraordinary circumstances exist which necessitate continuation of such assistance or the national interest of the United States requires such assistance.” Our leaders seem to think Israel’s continued human rights abuses are in our best interest.

The Taylor Force Act will most likely pass along with the rest of the omnibus bill. At that point we must consider some new strategy to advocate for assistance to Palestinian families in need. An educational program for our Congress members, perhaps – with a test at the end to make sure they were paying attention? A trip to see Gaza, Silwan, and the unrecognized villages of the Negev? Or perhaps a heart transplant?