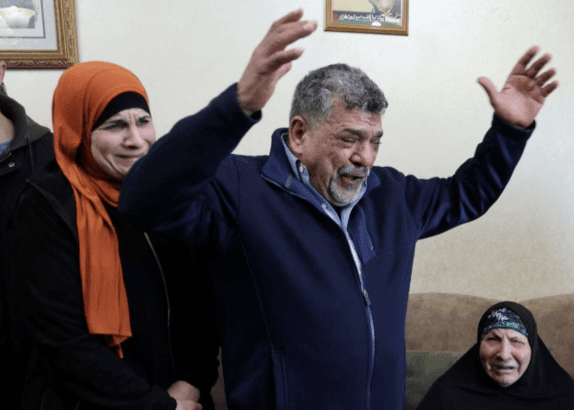 Palestinian relatives mourn during the funeral of Omar Abdalmajeed As’ad, 80, who was found dead after being detained and handcuffed during an Israeli raid, in the village of Jiljilya, in the Israeli-occupied West Bank, on January 13, 2022.

Early Wednesday morning, Israeli soldiers detained, blindfolded, handcuffed & beat 80-year-old Palestinian-American Omar Abdalmajeed As’ad. They claim they left him alive in a building that was under construction. He died soon after. It remains to be seen whether Israel will be held accountable.

Israel has promised to investigate the death of an 80-year-old Palestinian-American man, whose body was found not long after Israeli soldiers had bound and blindfolded him and led him into an empty building.

As’ad was on his way home after visiting relatives, when Israeli soldiers stopped his car, bound and blindfolded him, and took him to an under-construction building at the edge of town. Two young men who had also been detained in the same place said that As’ad had been pulled out of his car, dragged about 200 meters, and handled aggressively, according to Middle East Eye.

When he was found dead several hours later, he reportedly had a plastic zip tie on one wrist.

A statement from the Israeli military claims soldiers were in the village to thwart “terrorist activity,” and detained As’ad when he would not comply with a search order. Israel claims that he was later released, alive (some outlets report that he died of a heart attack).

Omar Abdalmajeed As’ad is just one of hundreds of Palestinian men that have lost their lives during middle-of-the-night raids by Israeli soldiers. The fully armed soldiers routinely carry out operations under cover of dark to frighten and intimidate Palestinians – often children – and detain them.

What makes this incident out of the ordinary is the fact that As’ad was an American citizen. He had lived most of his adult life in Milwaukee, Wisconsin, but returned to Palestine about ten years ago. His US passport is what made him worthy of notice by US media and government.

US State Department spokesperson Ned Price indicated that our government had reached out for “clarification” on the matter, and that Israel had begun an investigation into As’ad’s death. Beyond condolences to the family of the deceased, there is little more to report.

Not the first American victim

It’s not the first time an American citizen has met with tragedy and injustice at the hands of the Israeli military. A number of others have been killed, seriously injured, or tortured. Some of the victims were activists, fighting for equal rights for Palestinians. Others were Palestinian-Americans. If Americans Knew reported on six of these cases; the Foreign Service Journal documented others.

These American victims had little success in holding Israel accountable – Palestinian victims have even less.

Israel also needs to take responsibility for the violence of its 54-year occupation of the Palestinians of the West Bank and East Jerusalem, its 15-year blockade of the Gaza Strip, and its founding war of ethnic cleansing.

The United States Congress needs to take responsibility for the way our tax dollars are bankrolling Israel’s atrocities. Americans have spoken clearly: we don’t want to blindly support Israel.

Consider sending an email to your Congress members, demanding they pressure the State Department on behalf of Omar Abdalmajeed As’ad’s family to get answers and an apology – and demanding they stop financing the oppression of the Palestinian people.

Regarding the death of Omar Abdalmajeed As’ad, the Washington Post quoted an Israeli spokesperson as saying, “The [Israeli military] will investigate this event in a thorough and professional manner, acting in line with our values and protocols.”

When an Israeli soldier commits an act of violence against a Palestinian, “values and protocols” consists of downplaying, inaction, and whitewashing (perhaps the best-known case of individual impunity is Elor Azaria).

It is not unreasonable to expect As’ad’s case to fade away without answers – unless advocates for justice keep the issue alive.

In NBC’s coverage of the story, it stated that the Palestinian Authority (PA) “administers pockets of the occupied West Bank,” including the area where As’ad was found dead.

In reality, Israel occupies the entire West Bank and has illegally taken over massive swaths of land, and transferred hundreds of thousands of Israeli Jews to live there. Those Israelis live – on Palestinian land – under Israeli rule. 2.7 million Palestinians live in what remains, under the Palestinian government.

However, Israeli forces invade these areas virtually every day, as they did the night of As’ad’s death, in order to carry out raids and arrests.

Ned Price, spokesperson for the US State Department, is only a messenger, not a policy-maker. The policy points that he articulates, however, are worth recalling, if only to remind us of the State Department’s reluctance to recognize that Palestinians – even Palestinian children – have rights, as this short video showcases.

An American group has created an action alert on the case for people to demand that their elected officials urge a US investigation from the State Department.