You Are Here: Home → Israeli trash is poisoning Palestinians in the West Bank

Israeli trash is poisoning Palestinians in the West Bank 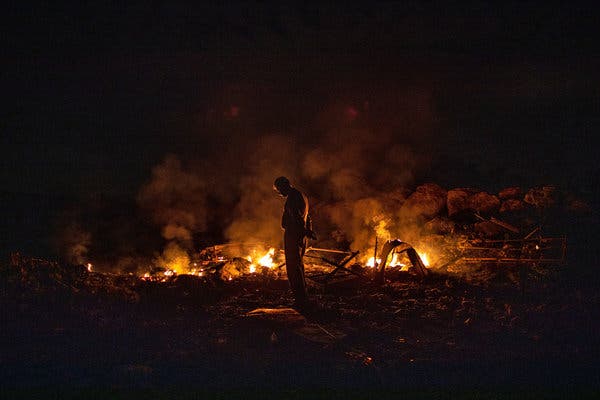 Israeli trash makes its way to the West Bank (pictured: the smoldering remains of appliances set on fire to extract the metal inside in the Palestinian town of Beit Awwa)

Burning Israeli trash for valuable raw metals is an “occupational bio-hazard” for thousands of Palestinians who have run out of options.

The Times of Israel recently reported on what sounds like a complicated story of environmental pollution and cancer in an area near the West Bank city of Hebron. The tragic issue can be boiled down to one main reason: Israel’s brutal occupation.

The pollution comes from the burning of discarded electronic equipment, or e-waste, most of it smuggled out of Israel by companies trying to reduce disposal costs. In an area where the average day labor wage is about $35 a day, Palestinians can earn double that by dismantling and reselling Israeli trash. But It’s possible to pull in $160 a day burning the plastic coating off electronic cables to get the copper inside.

The clouds of black smoke from the process have resulted in soaring cancer rates. A woman whose home is in range of the smoke said, “There isn’t a house on our street without someone who’s had cancer or passed away.” Her own four-year-old son has leukemia.

Researchers have found dangerously high levels of lead in local children, which can cause long-term neurological damage. Other Palestinian residents have suffered sudden, debilitating respiratory diseases after being exposed to burning waste.

Palestinian farmland has also been poisoned by the process.

[NOTE: read more about the burning of e-waste in Palestine here.]

In 2002, the Israeli government began building a Separation Wall, ostensibly to keep Palestinians out of Israel – but since much of the wall was on Palestinian land, confiscating about 40,000 acres, many consider it a land grab.

The wall ravaged the economy of the the entire West Bank, especially towns right next to the barrier. Many residents had been laborers in Israel, but were now unable to reach their places of work; others whose trade required access to Israeli products were out of luck. Many Palestinian farmers had no access to their fields.

Each town affected by the wall has handled it differently, but the people of Beit Awwa, Idhna, and Deir Samet, desperate for some kind of income, turned to the electronic waste industry for income. The residents are making a living, but paying a high cost in health.

Wealthy nations around the world ship their rubbish to poor countries. Such is the case with Israel and Palestine. According to the Times of Israel,

Israel generates about 130,000 tons of electronic scrap per year, according to official estimates. Much of it is smuggled into the West Bank, where it is resold or stripped by Palestinians seeking the valuable raw metals within…

Every day, Jewish and Arab Israeli smugglers purchase discarded electronics from Israeli companies and scrapyards. Driving vans bearing old cables and appliances, the traders pass through Israeli checkpoints into the West Bank, where they unload their cargo.

In Beit Awwa, hundreds of shopkeepers attend a nightly scrap auction. Dozens of trucks stand by, piled high with old appliances. Some are sold to shopkeepers, who hope to refurbish the goods and turn a profit. The rest are sent to junkyards, where Palestinians tear away plastic with hammers, seeking to squeeze out every gram of precious metal.

Palestinian officials blame Israel: they insist that Israeli soldiers working at checkpoints are aware of the huge quantities of trash and e-waste illegally entering the West Bank, and do nothing to stop it.

The Israeli occupation regime has made it easy for “burners” to ply their trade.

In Area A – about 18% of the West Bank – the Palestinian Authority (PA) is supposed to exercise complete civil and security control (although Israeli soldiers enter nearly every day to carry out raids and arrests – for example see Masafer Yatta news).

Area C  – about 63% of the West Bank – is under Israeli control. This is where 350,000 Israelis live in illegal settlements; Israeli police focus their attention on the perimeters of these settlements. Palestinian police can not enter Area C without Israeli permission – leaving large areas essentially unsupervised.

It is to Area C that “burners” go to start their toxic fires. Israelis living just beyond the Separation Barrier worry that they too will soon start getting sick from the trash burning.

Although both Israel and the PA want to crack down on the practice, they have so far failed. The red tape required to get a patrol car to the scene of an incident can take hours or even days.

An attempt was made at cooperation in 2017, says the Times of Israel. With Swedish funding, a plan was implemented whereby Israel worked directly with Palestinian local authorities – bypassing the PA – and they were able to stop the trash burning: “for one memorable spring, the skies cleared of smoke.” Those who’d depended on burning for a living began transitioning to recycling.

The program was promising enough that the Swedish agency pledged more funding in order to expand the efforts.

Then the trouble began. The Palestinian Authority wanted to administer the finances – the locals pushed back, fearing the money would disappear in the abyss of government corruption.

TOI reported on other disagreements:

During talks with the Israelis, the PA demanded that Israel sign an international convention stating the waste was crossing the borders of a neighboring state. Israel, which does not recognize a Palestinian state, refused.

“If Israel had gone along with this, it would have been a recognition of Palestine in a way we haven’t seen. And the PA, in their dealings with this, were not willing to make informal or tacit agreements that could allow this to go ahead without it,” said Johan Schaar, a former Swedish development official who managed the project.

“There are countless examples of initiatives that got stuck by the Palestinians’ desire to prove their independence from Israel and by Israel’s desire to say that there’s no border, that it’s not two separate states,” [a former Israeli environmental protection minister] said.

With talks at a dead end, the Swedish government suspended their involvement. The burning soon resumed, darkening the skies over the towns.

Many Palestinians resent the constant streams of trucks full of Israeli scrap and trash that constantly unload in their neighborhoods, but the wall has restricted their options, and they need scrapyard work to make a living. “We’re speaking about an industry that employs tens of thousands of people across the West Bank,” said the owner of a Palestinian recycling facility.

Still, they fight to bring an end to the toxic burning.

The mayor of Beit Awwa summed up the problem: “Everything here gets wrapped up in everything else. You try to do something good for your hometown. But you find yourself talking politics and borders and statehood and everything else.”

A widespread system of oppression

Environmental degradation is just one of many ongoing catastrophes that Israel inflicts on the Palestinian population under its control (see list of articles below for more on Israel’s waste mis-management).

The construction of the Separation Wall has caused untold economic and personal hardship to Palestinians living in the West Bank, East Jerusalem, and Israel (read more here).

Israeli checkpoints scattered throughout the West Bank deprive Palestinians of their freedom of movement, and hence their access to health care and education (read more here and here).

Israeli police and military detain, assault, and harass Palestinians on a daily basis (read many stories here), and carry out demolitions of their homes and businesses (more here).

The list goes on, and includes millions of Palestinians under a 15-year-long blockade in the Gaza Strip, unable to get necessities and subject to invasions and airstrikes (more here and here); and millions living in exile 73 years after being displaced in Israel’s war of ethnic cleansing.