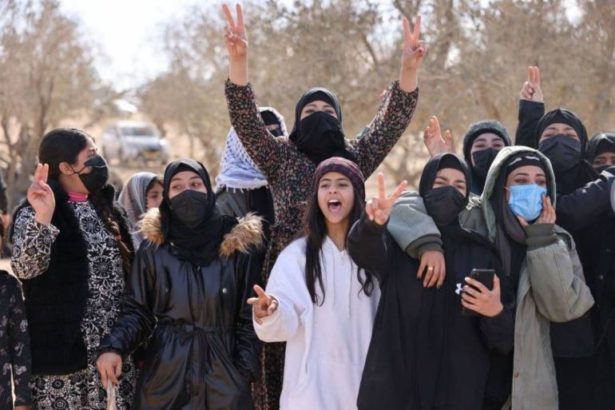 As the protest for Bedouin rights in the Naqab desert builds steam, Israel is targeting children. The Israeli state does not recognise the Palestinian Bedouin’s right to the land, despite the fact they hold deeds that are older than Israel.

Children are not afraid to join protests for Palestinian Bedouin rights. Israeli soldiers and the military court system treat them just as harshly as they treat adults.

They busted down the door before sunrise and about 30 Israeli soldiers swarmed the family home.

The subject of their arrest? Twelve-year-old Ammar, whom they accused of attending a protest against the land clearances in the Naqab region. But his mother says the family is still not sure why they took him, as the boy was at home at the time.

[NOTE: Read about the current crisis for Palestinian Bedouin here.]

“We don’t know exactly why they arrested him. At 5:30am, 30 Israeli soldiers hit the door with their legs. We freaked out and they asked for him while he was sleeping,” recalls Ammar’s mother.

“He is 12, he can’t go to school because he is under house arrest. The Israeli authorities banned him from going to school for 10 days starting from yesterday. I was shocked when they informed us of this. I screamed at them: ‘What could a 12-year-old do to you?’ I was so afraid they would hit or torture him in prison, he was so scared and cried,” she says.

Ammar was detained and eventually sent home. He has not spoken a word since he returned, and his family are worried about what happened to him in custody.

For days, protests in the Naqab desert have flared as the Palestinian Bedouin fight for their very existence and resist an aggressive forestation project overseen by the Jewish National Fund (JNF), a Zionist organisation.

JNF has been planting non-native pine trees on Palestinian land for decades, with the ultimate aim of expanding Israel’s settlement programme.

This particular project is worth a staggering $48m, and has full backing from the Israeli government.

The organisation has plans to raze Beer al-Sabe (Be’er Sheva) in the Naqab desert, specifically a village called Sa’wa, and according to Marwan Abu Frieh, a field researcher and Naqab (Negev) office coordinator for Adalah, a legal centre for Arab rights in Israel, the Israeli police have begun a campaign of arrests and detained about 150 people, with 40 percent of them legally being minors. Abu Frieh says at least 16 are still detained.

Palestinian children have ‘no sense of fear’

The Israeli state does not recognise the Palestinian Bedouin’s right to the land, despite the fact they hold the deeds predating the creation of the state of Israel, and their presence on the land has been recorded for thousands of years.

The father of schoolgirl Jenin, 16, was not at home when his daughter was arrested. While at work, his WhatsApp pinged like mad with images of Jenin being arrested by Israeli forces at the protests being sent to him.

Although afraid of what might happen to his daughter in Israeli custody, he also had a sense of pride that she was fighting for her homeland.

“I took permission from work and went to check on my daughter who was arrested for a few hours, and then she was sent home,” he recalls. “I asked her how she was arrested and how she felt while she was under arrest, she felt so proud of herself and she had no sense of fear.”

He says life is difficult in the Naqab with Israelis refusing to allow them to build on their own land or grant recognition, despite repeated attempts by the Bedouin and international campaigns to recognise the Bedouin’s claim on the land and leave them alone.

The Israeli forces rely on legislation passed in the Knesset and legal precedents that make up the law, which allows the police to arrest minors as young as 12. Marwan’s organisation Adalah acts as defence lawyers for Palestinian arrestees, but find themselves running into difficulties, including working with the documents provided to them.

Conditions for children are bad while they are under arrest with many finding themselves infected with COVID-19 and facing physical and psychological abuse.

“Even if they were released, they have already suffered from this arrest and its bitter experience for a period of days or a week or more, this breaks their morale and keeps them in a very bad psychological state after all what they suffered from arrest,” says lawyer Shahda Ibn Bari, who regularly defends Palestinian children arrested during protests.

“Children are abused during their arrest, and we saw some pictures of these children being strangled,” says Marwan. “We also learned that during the investigation, they are threatened with their future, as if they were trying to intimidate the children not to demonstrate or to inform other children of what happened to them, so they spread fear among the children.”

This tactic is in place to ensure young people such as Jenin are too scared to join the protest. Jenin, her father says, went to stand alongside her schoolmates, and while she was there committed no violent acts.

“She felt that she was doing a great job towards her people and their cause because the Israeli forces attacked our neighbours and many of her colleagues were at the event and this is what encouraged her to go there,” he said.

The police use the law to their advantage. Although children up to the age of 14 must appear in court within 12 hours of their arrest, the police repeatedly apply to the courts for detention extensions, which are usually granted.

“As an example of what is happening, the other day a 14-year-old minor was released, his detention was extended six times. Yes, six times the court asked to extend his detention and the appeal was made to the Central Court, which returned the file to the Magistrate Court and extended his detention,” explains Marwan.

“Today, during his release, the police demanded to stop the implementation of the release decision and when we appealed this decision, the police retracted, and he was released.”

Shahda says life is made very difficult for lawyers to defend minors, as the intelligence services will intervene and override any court decisions made to release a child, on the grounds of national security, and their alleged offences are reclassified as such.

“[The intelligence services] have the authority to prevent a child from meeting a lawyer, to detain him for days, to bring him before the court without seeing a lawyer, and can hold the child incommunicado to the outside world,” he says.

“Arresting children is a war of attrition against the Palestinian child by the courts and the police who arrest the child, and we always appeal. We are not always able to convince the court. Sometimes the Israeli court does not accept our appeal.”

Ammar’s mother, worried about the psychological damage caused to her son, laments that Israeli authorities refuse to see Palestinian minors for what they are – children.