You Are Here: Home → Israeli Army’s Lies Can No Longer Salvage Its Image

Israeli Army’s Lies Can No Longer Salvage Its Image 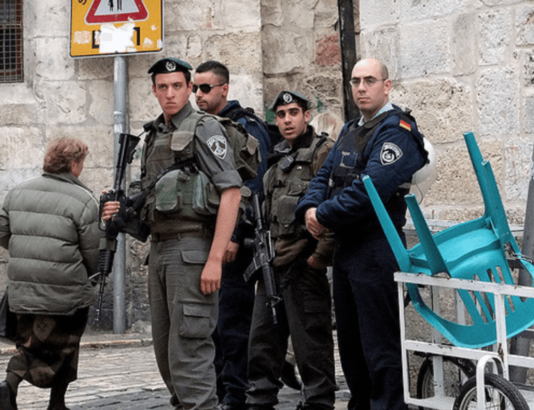 The lies that started 100 years ago with “a land without people for a people without a land” continue unabated to this day, but with closed-circuit TV, smartphones, and social media, Israel’s army can’t seem to manufacture airtight alibis anymore, and it is becoming clear that its slogan, “the most moral army in the world,” has been built on planting weapons and cover ups that are increasingly becoming exposed.

It is has been a very bad week for those claiming Israel has the most moral army in the world. Here’s a small sample of abuses of Palestinians in recent days in which the Israeli army was caught lying.

A child horrifically injured by soldiers was arrested and terrified into signing a false confession that he was hurt in a bicycle accident. A man who, it was claimed, had died of tear-gas inhalation was actually shot at point-blank range, then savagely beaten by a mob of soldiers and left to die. And soldiers threw a tear gas canister at a Palestinian couple, baby in arms, as they fled for safety during a military invasion of their village.

In the early 2000s, at the dawn of the social media revolution, Israelis used to dismiss filmed evidence of brutality by their soldiers as fakery. It was what they called “Pallywood” – a conflation of Palestinian and Hollywood.

In truth, however, it was the Israeli military, not the Palestinians, that needed to manufacture a more convenient version of reality.

Last week, it emerged, Israeli officials had conceded to a military court that the army had beaten and locked up a group of Palestinian reporters as part of an explicit policy of stopping journalists from covering abuses by its soldiers.

Israel’s deceptions have a long history. Back in the 1970s, a young Juliano Meir-Khamis, later to become one of Israel’s most celebrated actors, was assigned the job of carrying a weapons bag on operations in the Jenin refugee camp in the West Bank. When Palestinian women or children were killed, he placed a weapon next to the body.
In one incident, when soldiers playing around with a shoulder-launcher fired a missile at a donkey, and the 12-year-old girl riding it, Meir-Khamis was ordered to put explosives on their remains.

That occurred before the Palestinians’ first mass uprising against the occupation erupted in the late 1980s. Then, the defence minister Yitzhak Rabin – later given a Hollywood-style makeover himself as a peacemaker – urged troops to “break the bones” of Palestinians to stop their liberation struggle.

The desperate, and sometimes self-sabotaging, lengths Israel takes to try to salvage its image were underscored last week when 15-year-old Mohammed Tamimi was grabbed from his bed in a night raid.

Back in December he was shot in the face by soldiers during an invasion of his village of Nabi Saleh. Doctors saved his life, but he was left with a misshapen head and a section of skull missing.

Mohammed’s suffering made headlines because he was a bit-player in a larger drama. Shortly after he was shot, a video recorded his cousin, 16-year-old Ahed Tamimi, slapping a soldier nearby after he entered her home.

Ahed, who is in jail awaiting trial, was already a Palestinian resistance icon. Now she has become a symbol too of Israel’s victimisation of children.

So, Israel began work on recrafting the narrative: of Ahed as a terrorist and provocateur.

It emerged that a government minister, Michael Oren, had even set up a secret committee to try to prove that Ahed and her family were really paid actors, not Palestinians, there to “make Israel look bad”. The Pallywood delusion had gone into overdrive.

Last week events took a new turn as Mohammed and other relatives were seized, even though he is still gravely ill. Dragged off to an interrogation cell, he was denied access to a lawyer or parent.

Shortly afterwards, Israel produced a signed confession stating that Mohammed’s horrific injuries were not Israel’s responsibility but wounds inflicted in a bicycle crash.

Deprived of a justification for slapping an occupation soldier, Ahed can now be locked away by military judges. Except that witnesses, phone records and hospital documentation, including brain scans, all prove that Mohammed was shot.

This was simply another of Israellywood’s endless productions to automatically confer guilt on Palestinians. The hundreds of children on Israel’s incarceration production line each year have to sign confessions – or plea bargains – to win jail-sentence reductions from courts with near-100% conviction rates.

It is more Franz Kafka than Hollywood.

A second army narrative unravelled last week. CCTV showed Yasin Saradih, 35, being shot at point-blank range during an invasion of Jericho, then savagely beaten by soldiers as he lay wounded, and left to bleed to death.

It was an unexceptional incident. A report by Amnesty International last month noted that many of the dozens of Palestinians killed in 2017 appeared to be victims of extra-judicial executions.

Before footage of Saradih’s killing surfaced, the army issued a series of false statements, including that he died from tear-gas inhalation, received first-aid treatment and was armed with a knife. The video disproves all of that.

Over the past two years, dozens of Palestinians, including women and children, have been shot in similarly suspicious circumstances. Invariably the army concludes that they were killed while attacking soldiers with a knife – Israel even named this period of unrest a “knife intifada”.

Are soldiers today carrying a “knife bag”, just as Meir-Khamis once carried a weapons bag?

A half-century of occupation has not only corrupted generations of teenage Israeli soldiers who have been allowed to lord it over Palestinians. It has also needed an industry of lies and self-deceptions to make sure the consciences of Israelis are never clouded by a moment of doubt – that maybe their army is not so moral after all.

Jonathan Cook won the Martha Gellhorn Special Prize for Journalism. His latest books are “Israel and the Clash of Civilisations: Iraq, Iran and the Plan to Remake the Middle East” (Pluto Press) and “Disappearing Palestine: Israel’s Experiments in Human Despair” (Zed Books). His website is http://www.jonathan-cook.net/