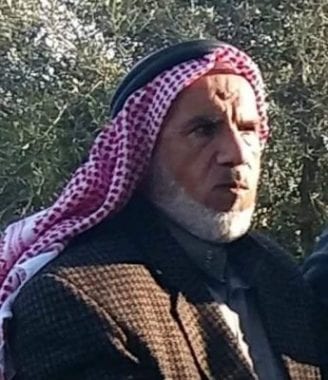 Open-fire regulations permit Israeli forces to shoot at Palestinians found inside the no-go zone near the Gaza fence (although the boundary of the zone changes without notice from time to time)  – even if they pose no threat to anyone’s life.

The land included in the current no-go zone (300 meters from the fence) accounts for 17% of the total Gaza land area and includes 35% of Gaza’s agricultural land.

83 Palestinians were killed in the no-go zone from September 2005 through September 2017, excluding “wartime.” 28 were killed in weekly protests held near the fence, on the Palestinian side. In most cases, groups of soldiers stand protected behind concrete blocks or dirt mounds, dozens of meters away from the fence. Soldiers use live fire when not in mortal danger, in areas that they know are inhabited by civilians. No one is held accountable for these deaths.

March 03, 2018: Mohammad Ata Abu Jame’, 59, was shot and killed by Israeli soldiers while working on his land in Khan Younis, in the southern part of the Gaza Strip.

The Palestinian Health Ministry reported that the farmer was shot by the soldiers, and suffered a serious injury, while working on his own land, in Khuza’a area, east of Khan Younis.

He was rushed to Nasser Hospital in Khan Younis, but died from his serious wounds, later the same day, March 3rd.

His wife said that she was heading to the family’s land to bring food for her husband when she heard the shots, and then she heard the husband screaming in pain and asking her to call for an ambulance.

Both Mohammad’s wife and their son said that there was no reason for the soldiers to shoot Mohammad, because he was just working on his land, and the situation was calm, and added that the man was very healthy, and always loved to work and plant the land.

“Our only problem is that our land is located near the border fence which was installed by Israel,” the son said, “They shot him for nothing — this was the first time that the soldiers open fire at us on our land…”

There were no protests near the border area when the soldiers shot the Palestinian man, and there was no reason for opening fire.

It is worth mentioning that the army frequently invades Palestinian lands located close to the border fence, and constantly opens fire at farmers and workers, an issue that has led to dozens of casualties, including many fatalities.

Mohammad was from Khuza’a, east of Khan Younis in the southern part of the Gaza Strip.