You Are Here: Home → Three Palestinians killed in past week, 2 of them children shot in the head

Three Palestinians killed in past week, 2 of them children shot in the head 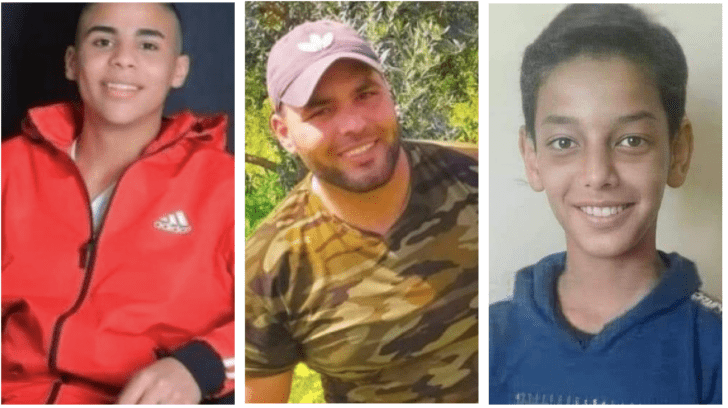 In the past week, three Palestinians (two of them children) have died at the hands of Israeli soldiers. An Israeli sniper was also killed. See reports below from International Middle East Media Center and Al Jazeera.

Israeli soldiers killed, on Tuesday at dawn, a Palestinian child in Balata refugee camp, east of the northern West Bank city of Nablus.

Ahmad Jibril, the head of the Nablus office of the Palestinian Red Crescent Society (PRCS), said the child has been identified as Emad Hashash, 15. [NOTE: read about other Palestinian children killed so far in 2021 here.]

He added that the slain child was shot with a live Israeli army round in the head and was pronounced dead after he was transferred to Rafidia hospital in Nablus.

His uncle said Emad went on the rooftop of his home to watch the unfolding events when many army vehicles invaded the refugee camp before a soldier shot him in the head.

Talking to the Palestinian News & Info Agency (WAFA, Emad’s brother, Mohammad, said that he and his brother went on the rooftop to take videos and pictures of the Israeli vehicles while withdrawing from the refugee camp before a soldier fired live rounds at them.

He added that the bullet penetrated his brother’s face through his nose and exited from the back of his skull.

He also said that the soldiers hurled a gas grenade at the main door of their home, and obstructed the ambulance while rushing to reach him.

“It took about 40 minutes from the moment he was shot until the medics were able to transfer him to the hospital,” Mohammad stated, “During this time, we were unable to leave our home to seek help for more than 15 minutes.”

The child was killed after several Israeli army vehicles invaded the refugee camp, and fired live rounds, rubber-coated steel bullets, and gas bombs at Palestinians who protested the incursion, and surrounding homes.

The Israeli army claimed that the child was killed during an exchange of fire with Israeli soldiers who invaded the refugee camp to “arrest a wanted Palestinian,” and added that the soldiers shot him when they reportedly “saw him on a roof of a building about to throw a rock at the soldiers.”

Eyewitnesses said the child was killed at dawn and added that the exchange of fire took place between Palestinian resistance fighters and Israeli soldiers shortly after midnight.

The soldiers also invaded and ransacked many homes in the refugee camp, before abducting a young man, identified as Sa’ad al-Ka’bi.

Palestinian Dies From Serious Wounds He Suffered In Gaza

Medical sources at the Shifa Medical Center, west of Gaza city, has reported on Wednesday morning, that a young Palestinian man died from serious wounds he suffered, on Saturday, August 21st, 2021, after Israeli soldiers shot him with live fire.

The sources stated that last Saturday evening, the soldiers shot and seriously injured Osama Khaled D’eij, 32, during protests that took place near the perimeter fence, east of Gaza city. [NOTE: read about the protest here, and the 80 children Palestinian killed by Israeli forces so far in 2021.]

The Palestinian was rushed to the Shifa Medical Center before he was immediately admitted to surgery but remained in a critical condition at the Urgent Care Unit until he succumbed to his wounds.

Osama, from Jabalia refugee camp, in the northern part of the Gaza Strip, was shot with expanding bullets.

His family said that he got married only a month before he was shot and subsequently died from his serious wounds.

On the same day, the soldiers shot and injured 41 Palestinians, including several children, during protests on Palestinian land near the fence, commemorating the 52nd anniversary of the burning of the Al-Aqsa Mosque, in occupied Jerusalem.

The holy site was burnt, on August 23rd, 1969, by Denis Michael Rohan, a fanatic Australian citizen.

Israel arrested Rohan, before alleging that he was “insane”, and hospitalized him in a mental institution, and on May 14th, 1974, he was released and deported on what Israel called “humanitarian grounds, further psychiatric treatment near his family”.

On Tuesday at dawn, Israeli soldiers invaded Balata refugee camp, east of the northern West Bank city of Nablus, and killed a child, identified as Emad Hashash, 15, while he was on the rooftop of his home.

Palestinian boy dies after being shot by Israeli forces in Gaza

A 12-year-old Palestinian boy who was shot in the head by Israeli forces during a demonstration at the Gaza-Israel border last week has died of his wounds, Gaza health officials said.

Hassan Abu al-Neil, who died on Saturday, was shot on August 21 during the demonstration organised by Gaza’s Hamas rulers to mark the 52nd anniversary of the burning of the Al-Aqsa Mosque compound in occupied East Jerusalem and to protest against the crippling blockade imposed by Israel and Egypt.

The firing by Israeli forces injured at least 41 Palestinians during the protests.

The Israeli military said some protesters had tried to climb the border fence and hurled “explosive devices” at its soldiers.

Another Palestinian man, later identified as a member of the military wing of Hamas, died of his wounds on Wednesday.

An Israeli soldier remains in critical condition after being shot by a protester.

The clashes were the most violent along the border since the end of the weekly Great March of Return protests in 2019. From 2018 to 2019, thousands of Palestinians in Gaza protested at the border against the blockade and for their right to return to lands they were ethnically cleansed from as Israel was founded in 1948.

Hundreds of Palestinian protesters demonstrated on Wednesday near the Gaza-Israel border, again calling for the easing of the blockade, which Israel has imposed since 2007.

Under pressure from Egyptian mediators, Hamas kept demonstrators away from the separation fence and the protests ended without a recurrence of last week’s deadly violence.

Following Wednesday’s protest, Israel said it was easing some of the commercial restrictions on Gaza, allowing vehicles, goods and equipment for rebuilding projects to enter the Palestinian enclave. Israel’s Defence Ministry said the easing could expand further if things remain quiet.

Egypt, which had closed its border crossing with Gaza to put pressure on Hamas, also partially reopened the crossing to allow a light flow of traffic to enter Gaza from Egypt.

The Israeli government reached an agreement with Qatar on August 19, allowing the Gulf country to resume aid payments to families in the Gaza Strip, a move aimed at reducing tensions with Hamas in the aftermath of May’s 11-day war – the fourth major Israeli assault on the coastal enclave since Hamas took power there in 2007.

Israel suspended aid payments in May and said the move was necessary to ensure Hamas did not benefit from cash injections.

At least 260 Palestinians were killed during May’s Gaza-Israel war, including 67 children and 39 women, according to the Gaza health ministry. Hamas has acknowledged the deaths of 80 fighters. Twelve civilians, including two children, were killed in Israel, along with one soldier.

An Israeli special forces officer shot during confrontations with Palestinians along the perimeter fence with the besieged Gaza Strip nine days ago has died of his wounds, Israeli police said.

Barel Hadaria Shmueli was part of a Border Police special unit operating during confrontations on the sidelines of a Palestinian demonstration against the Israeli blockade on Gaza near the perimeter fence separating the Hamas-run enclave and Israel.

“On Saturday, [August 21] during an operational activity on the border fence of the northern Gaza Strip, the force came under fire from the Strip, and Barel was critically wounded,” a police statement said on Monday.

“After over a week during which he fought for his life along with the staff at Soroka hospital (in the southern Israeli city Beersheba), he was pronounced dead.”

A total of 41 Palestinians were wounded in the protests that weekend according to the Gaza Health Ministry.

Two died of their injuries last week – a 12-year-old boy and a member of the al-Qassam Brigades, the military wing of Hamas.

The confrontations were the most violent along the perimeter fence since the end of the weekly Great March of Return protests in 2019.

The movement, which began in 2017, demanding an end to Israel’s blockade and the right of Palestinians to return to lands they fled or were expelled from when the Jewish state was founded in 1948.

The protests ended after Egypt, Qatar, and the United Nations mediated an agreement between Israel and Hamas, where Israel agreed to relax its blockade.

The Hamas-backed weekly demonstrations, often violent, sputtered as Israel killed some 350 Palestinians in Gaza more than a year.

Israel and Palestinian groups then fought a devastating 11-day conflict in May, the worst between the two sides in years, which ended with an informal truce.

Incendiary balloons sent from the Palestinian territory towards Israel have continued in the months since, however, with Israel blaming Hamas and often launching their own attacks with air raids.

Israel has, at the same time, been easing restrictions on civilian life and commerce for the territory it has blockaded since 2007, when Hamas took power.

Some two million people live in the impoverished coastal strip, according to aid organisations.