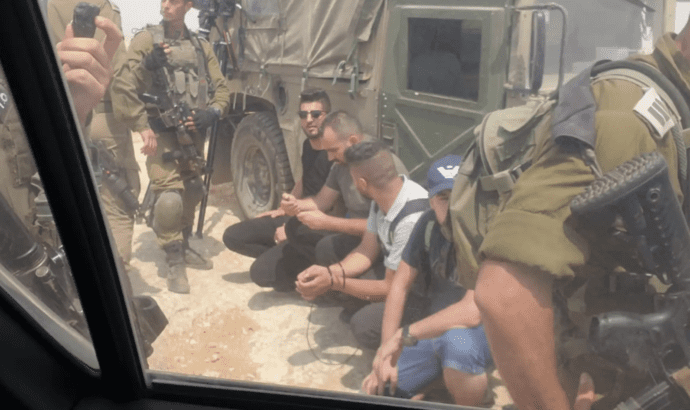 Israeli soldiers arrested seven Palestinian journalists who covered a protest in the South Hebron Hills on Friday. According to the journalists, they were told they were being arrested since the area had been declared a closed military zone, but the military’s own rules permit journalists to be in such areas.

Mashour Wahwah, a journalist working for the Palestinian news agency WAFA, told Haaretz that he was there to document the gathering of Palestinian residents of the area, whose land is slated for expropriation by Israel. “The prayers ended, and we wanted to return home, but suddenly the army arrested one of the residents,” he said. [NOTE: learn more about Israel’s expropriation of Palestinian land here.]

Wahwah added that before the arrests there had been no confrontations and the army did not need to use any riot control measures. “When I photographed the arrest they detained me as well, but we were on our way out, going home,” he added.

The area in question is not a permanent closed military zone, but declared as such by the Israeli authorities every time a protest or a vigil is held there.

According to Wahwah, when he tried telling the soldier he was a journalist, the soldier beat and handcuffed him.

After his arrest, soldiers also arrested other journalists who were there, handcuffed them and took them all to the police station in the nearby settlement of Kiryat Arba. According to the journalists, the soldiers told them that they were inciting the worshippers against them.

The video documenting part of the incident shows a soldier saying: “We’ll arrest all the journalists. Is that what you want?” while telling them they were under arrest for trespassing a closed military area. In another video, one can hear soldiers shouting at the journalists to sit, followed by one of the journalists saying: “Don’t hit me.” The journalists’ cameras were taken from them.

The journalists were released to their homes after four hours at the police station. Their cameras were returned, and they were told to come back for questioning on Sunday. Wahwah said that during his interrogation by the police on Sunday, he filed a complaint against a soldier who, he says, used violence against him and another journalist.

The journalists said that an officer was present during the incident. He had arrested them in similar fashion on previous occasions while they were covering demonstrations. “We feel that he’s trying to send us a message that he will arrest us every time he sees us,” says Wahwah. He adds that over the last year, he’s been arrested three times by that officer, whose name he doesn’t know.

According to an army regulation that surfaced during a legal process in 2017, journalists are permitted to be in a closed military zone. Despite this, the army usually restricts Palestinian journalists and prevents them from covering such protests.

A spokesperson for the Israeli military said in response: “On Friday there was a public disturbance near the outpost of Avigayil, in an area controlled by the Yehuda brigade. In the course of this disturbance, several people who identified themselves as Palestinian journalists were actively and physically involved in trying to increase friction in the area, while disturbing the operation of army units. On this background, the unit detained them and transferred them to the police for further treatment.”