You Are Here: Home → Palestinian children held in solitary confinement by Israel surges 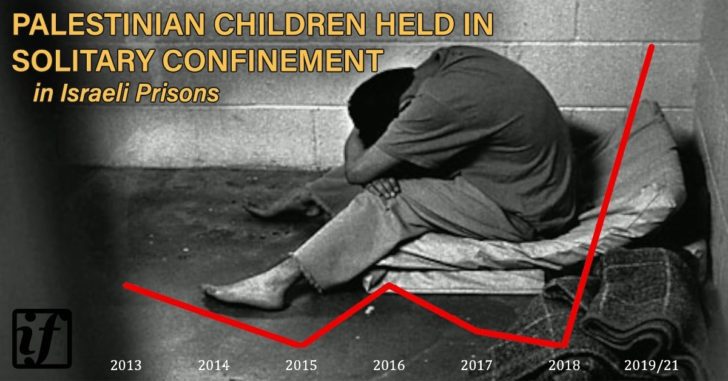 The number of Palestinian juveniles held in solitary confinement by Israel has surged in recent years. The youths are frequently beaten, sometimes sexually assaulted, and report being kept in a small cell underground. (Image by If Americans Knew using Military Court Watch chart over generic photo depicting solitary confinement.)

A Military Court Watch investigation indicates that the number of Palestinian minors currently held by Israel in solitary confinement has surged to approximately 100 to 200 children each year. The impact on the youths has included attempted suicide and head banging against metal cell doors while begging to be released…

An investigation by Military Court Watch indicates that the number of Palestinian child prisoners currently held by Israel in solitary confinement has surged to between 100 to 200 children each year.

A new report reviews 45 testimonies from children held in solitary confinement between January 2019 and May 2021. These testimonies trace the journey of the child from their homes in the West Bank to interrogation centres located in Israeli settlements in the West Bank and inside Israel. The testimonies document children being held in tiny cells, sometimes described as filthy or cockroach ridden, with little or no bedding and inedible food. More disturbingly, in most cells there are no windows and an electric light is left on 24 hours a day.

While kept in these conditions, the testimonies describe how the children are subjected to multiple interrogations, mostly without the benefit of their legal rights, in which they are intimidated, threatened and cajoled into providing confessions while suffering from severe sleep deprivation. Out of the 45 testimonies where the child’s case was concluded, the conviction rate in a military court was 100 percent.

The psychological and physical impact on these children of being held in solitary confinement for an average of 10.5 days was profound, including: attempted suicide; threatened suicide; acts of self-harm, such as banging their heads against metal cell doors begging to be released; weight loss up to 12 kilograms [26.5 pounds]; substance addiction; a lack of hope and despair.

The report also notes that in 70 percent of cases the children were unlawfully transferred to interrogation facilities outside the West Bank inside Israel – in violation of prohibitions put in place following World War Two.

There is a general consensus that no child should be held in solitary confinement under any circumstances. This conclusion was reached following an extensive review of the science surrounding the impact of isolation on children and has been adopted, among others, by the UN Special Rapporteur on Torture, the UN Committee against Torture, the UN Committee on the Rights of the Child and UNICEF.

Below are a few excerpts:

Many children report being “driven crazy” by the constant light or experiencing pain in their eyes due to the “flickering dim light”. In one case a child reports being held in a windowless cell where the light was mostly kept off – leaving him in total darkness for 11 days – he reports being left in “deep distress”.

“The cell was so small that I could not stretch my legs to sleep. I was given a small rag to sleep on and I had to bend my legs to fit in the small space … During this time I was beaten and the person who beat me told me he would stop beating me only if I confessed.”

“I was taken to a small cell measuring no more than 1 x 1 meters. I was left there by myself for 13 days. The cell did not have any windows and I could not tell day from night. It had a sheet and no mattress or pillow and a toilet but no sink. The air conditioner was on and very cold. I was very distressed and wanted to get out. During this time, I had two more interrogations.”

“I felt so terrible that I wanted to kill myself. I broke a plastic fork they brought with the food and I cut my wrist and made more cuts along the inside of my arm until my elbow.”

“On my 7th day in solitary confinement I lost my mind completely and was in despair. I felt I could do anything; like attack the guard. I started to bang my head against the rough walls until I bled. When the guard found out he called in some soldiers and they took me to the clinic. The doctor treated my wound and then I was handcuffed and shackled and taken to a room where I was tied to a chair for about three hours as punishment for hurting myself.”

“By this time, I was very distressed. I could not stand to be in the cell one more minute. In order to get out I banged my head against the door to get attention. I hit my head very hard against the door and the prison guards came within a few minutes because they saw what I was doing on CCTV. I was taken out of my cell and into another room which had a mattress on the floor and two steps on both sides of the mattress. They made me lie down on the mattress and then lifted my arms and legs up and tied me with metal handcuffs and shackles to the side steps in a position that was very uncomfortable. I was left in that position for about two hours as punishment for banging my head against the door. The guards came into the room to wake me up whenever I tried to fall asleep.”