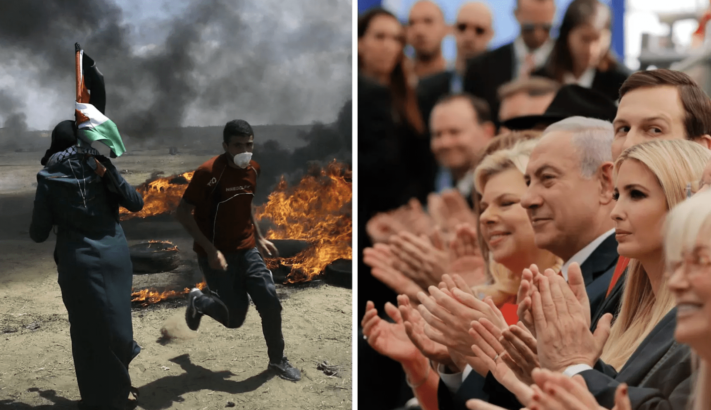 In this photo combination, Palestinians protest near the Israel-Gaza border and U.S. and Israeli dignitaries applaud at the opening ceremony of the U.S. embassy in Jerusalem , May 14, 2018. Credit/AP

Today, unarmed Gazans died by the dozens simultaneously with a star-studded celebration in Jerusalem. American pastors John Hagee and Robert Jeffress, well-known bigots, preached and prayed. Donald Trump was practically worshiped. No amount of spin could turn this debacle into a genuinely admirable day for Israel.

Whether one accepts the Palestinian narrative of hungry masses demonstrating for dignity, or the Israeli version of a cynical exploitation of human lives as cover for homicidal intent, there is no doubt that the scores of dead and many hundreds of wounded on the Gaza border spoiled Benjamin Netanyahu and Donald Trump’s extravaganza. The more the casualties in Gaza mounted, the more those assembled at the site of the new American embassy in Jerusalem seemed arrogant, detached and mainly devoid of compassion. As more and more reports and tweets came in about the mounting casualties in Gaza’s day of bloodshed, the worst since the 2014 Protective Edge operation, the more the claim that the embassy move could actually help achieve peace seemed both cynical and ridiculous.

The knockout to Israel’s image was built-in in the script. When a modern, sophisticated and armed-to-the-teeth army confronts unarmed masses sporting kites and stones, the propaganda debacle is inevitable. Even the best hasbara points – sorely lacking in this case, except for domestic consumption – cannot contend with so many killed and wounded. Hamas recruited the embassy ceremony as a catalyzer for its Nakba campaign, which could escalate in the coming days, and exploited the international media’s coverage of the Jerusalem ceremony to its own ends. But while Israelis told themselves that they’re dealing with a terrorist organization that is callous to the lives of its own people and rules over a territory that Israel supposedly withdrew from, international public opinion could only see strong versus weak, occupier against occupied, a heartless state confronting despair and desperation.

At the same time, the makeup and participants in the Israeli-American Jerusalem hoopla made clear – if there were any doubts – that Netanyahu and his colleagues couldn’t care less these days about international public opinion. Israel has only one king, and his name is Donald Trump. He is Israel’s salvation and his word – or at least his benefactor Sheldon Adelson’s – is the bond that fuses Jerusalem and Washington together. The participation of pastors John Hagee and Robert Jeffress in the ceremony accentuated this new axis of fundamentalist, messianic End-Times-adoring elements that increasingly dominate ties between the two countries. Hagee once described Adolf Hitler as God’s hunter and Jeffress consigned unrepentant Jews to hell, but in the era of Trump-Netanyahu, old-style aversion to Jews is cast aside for the sake of unqualified support for Israel’s rejectionist, settler-dominated agenda. A shared hostility to Islam, which Jeffress once depicted as a religion of pedophiles, underpins the ties that bind the two countries together.

In this regard, the ceremony also marked the demise of bipartisan support for Israel and even dispelled the notion that anyone really cares. The U.S. delegation didn’t include even one Democratic legislator – an absence that spoke volumes. And even though most Israeli opposition leaders came to the ceremony, out of true conviction or fear of public opinion, Meretz leader Tamar Zandberg was right to stay at home. A genuine, peace-loving leftist, even one who supports the embassy move in principle, shouldn’t be seen in the nationalistic-messianic forum that convened in Jerusalem under the guidance and orchestration of left-loathing U.S. Ambassador to Israel David Friedman. 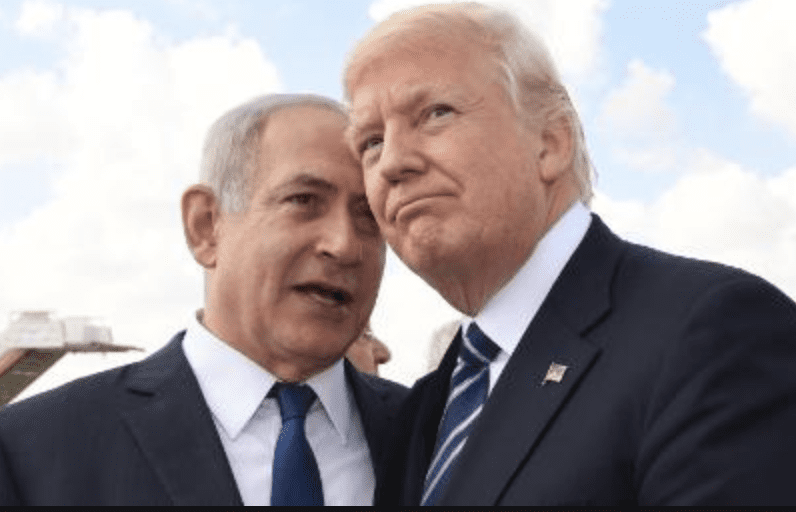 For most American Jews, especially those who still see themselves as supporters of Israel, the ceremony was nothing less than a punch in the gut. Not only do they consider Hagee and Jeffress beyond the pale, but the tumultuous standing ovation that preceded Trump’s videotaped greetings highlighted the growing schism between Israel and the largest Jewish Diaspora. For American liberals, Jews and non-Jews alike, there is no more incriminating evidence of their distance from Netanyahu’s Israel and its steady veer toward the rabid right than Israel’s adoring embrace of a president who is seen as a clear and present threat to the enlightened values they cherish.

All of this probably doesn’t bother Netanyahu at all. The Israeli prime minister is riding an unprecedented wave of public support for what is seen as his unstoppable stream of successes, from Trump’s decision to abandon the Iran nuclear deal all the way to singer Netta Barzilai’s victory in Saturday’s Eurovision contest. Netanyahu has chosen to put all of Israel’s chips on a U.S. president whose foreign policy, according to Monday’s Washington Post, is based on a principle of “buy now – pay later.” Trump is already a hero for unilaterally reneging on the nuclear accord, despite the immediate damage to the trans-Atlantic alliance and the still-unknown repercussions and ramifications of his decision. On Monday he was anointed “King of Mercies” by Sephardic Chief Rabbi Yitzhak Yosef – who recently compared black people to monkeys – even though the consequences of his decision to move the embassy, including the smothering of faint hopes for peace and the threat of a third intifada, will only become known in the coming weeks and months.

In the meantime, Israelis rejoice and Palestinians remain despondent.  Only time will tell, as the cliche goes, whether the “historic day” so joyfully pronounced in Jerusalem on Monday heralds the arrival of a spring of hope or a winter of despair, or, as only the Middle East can sustain, of both together.