You Are Here: Home → U.S. Embassy opens in Jerusalem amid Palestinian protests 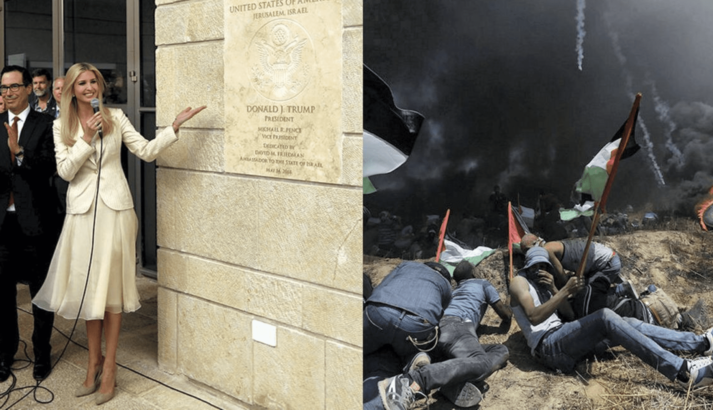 Senior White House Adviser Ivanka Trump and US Treasury Secretary Steven Mnuchin stand next to the dedication plaque at the opening of the US embassy in Jerusalem on May 14, 2018, left, as Palestinian demonstrators on the Israel-Gaza border take cover from Israeli fire and tear gas during protests against the US embassy move. Ronen Zvulun and Ibraheem Abu Mustafa / Reuters

The world turns a blind eye on Palestinian nonviolent protest at the Gaza border; at least 52 Palestinians have died today at the hands of the Israeli military.

Meanwhile roughly 50 miles away, the US embassy opening celebration is underway, including Trump family members, members of Congress, evangelical pastors, and billionaires – none of whom have mentioned Israeli violence happening right now. It is, in our president’s words, a “great day.”

Amid deadly clashes along the Israeli-Palestinian border, President Trump declared Monday a “great day” for Israel. His top aides celebrated the opening of the new U.S. Embassy in Jerusalem as a campaign promised fulfilled.

“While presidents before him have backed down from their pledge to move the American Embassy once in office, this president delivered,” White House senior adviser Jared Kushner said. “Because when President Trump makes a promise, he keeps it.”

Mr. Trump’s daughter Ivanka and son-in-law Kushner, along with Treasury Secretary Steve Mnuchin, led the U.S. delegation with a single message: Only Mr. Trump had the courage to act on what America has wanted for a long time.

[Editor’s note: fewer than half of Americans favor the embassy move.]

The relocation of the embassy from Tel Aviv has infuriated the Palestinians, who seek east Jerusalem as a future capital. Protests roiled the Gaza border, resulting in at least 43 Palestinians killed, officials said.

Kushner addressed the Israeli-Palestinian conflict during his speech.

“We believe that it is possible for both sides to gain more than they give so that all people can live in peace, safe from danger, free from fear and able to pursue their dreams,” Kushner said. “The United States recognizes the sensitivity surrounding Jerusalem, a city that means so much to so many … Jerusalem must remain a city that brings people of all faiths together.”

In a video address at the ceremony’s opening, Mr. Trump said the move to Jerusalem has been a “long time coming,” after the U.S. had “failed to acknowledge the obvious” for many years. Mr. Trump said he remained committed to “facilitating a lasting peace agreement,” and that he was “extending a hand of friendship to Israel, the Palestinians and to all of their neighbors.”

Earlier that morning on Twitter, Mr. Trump urged people to watch the ceremony on television and declaring the day “A great day for Israel!”

U.S. Embassy opening in Jerusalem will be covered live on @FoxNews & @FoxBusiness. Lead up to 9:00 A.M. (eastern) event has already begun. A great day for Israel!

Likewise, Mr. Trump’s aides also made no direct reference to the climbing death toll. In a Fox News interview, Mnuchin repeatedly referenced Jerusalem as the capital of Israel and said Mr. Trump should be praised for “taking action” to keep Americans and people in the Middle East safe.

“The president is making difficult decisions because they are what he believes are the right long-term decisions and not just kicking the can down the road,” Mnuchin said.

Mnuchin also said “it’s not coincidental” that the embassy move coincided with Mr. Trump’s announcement that he planned to abandon the Iran nuclear deal, a move supported by Israeli Prime Minister Benjamin Netanyahu, who was sitting next to Kushner at Monday’s ceremony.

Kushner also spoke about Iran during his speech.

“Iran’s aggression threatens the many peace-loving citizens throughout the region and the entire world,” Kushner said.

The embassy celebration was widely considered a snub by the Palestinians. Roughly 800 guests were expected to attend. U.S. officials said last week that Mr. Trump’s delegation was not planning on meeting Palestinian officials during their visit.

The Trump administration in recent months also has slashed U.S. aid to the Palestinians and programs that support them.

Mr. Trump’s policy is a sharp departure from past U.S. administrations, which have tried to position America as a neutral party ready to broker a peace deal.

“Of all the things President Trump could have done, doing this (embassy move) is the strongest signal he could send to the Israeli people,” South Carolina’s Graham said.