You Are Here: Home → Death toll from Gaza (65, including 16 children), Israel (7), and continuing updates

Death toll from Gaza (65, including 16 children), Israel (7), and continuing updates 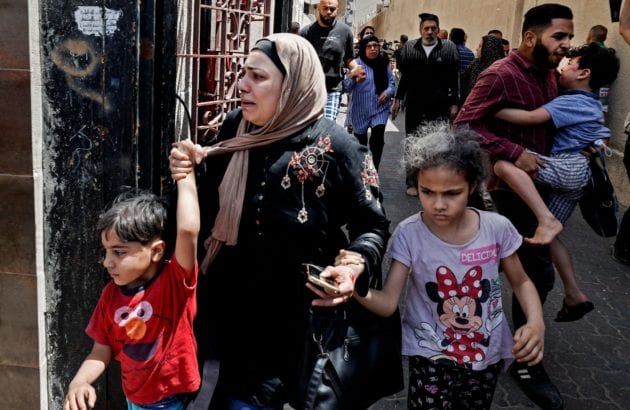 As Israel continues its attacks on Gaza, and Gazan resistance fighters retaliate, the death toll continues to rise; Israeli rhetoric grows more hawkish; the US stands solidly by Israel’s side.

An Israeli army spokesman says that its warplanes have hit 600 targets in Gaza since the conflict began, and the military is preparing for a possible ground assault on Gaza.

The US has vetoed a United Nations resolution condemning Israel’s aggression against Gaza.

The following is an update to our Tuesday, May 12 article, which appears below.

CNN reports that the death toll is now at 65 Palestinians and 6 Israelis, plus one foreign worker in Israel.

The Palestinian deaths include at least 16 children, 5 women (one of them pregnant), and 1 senior citizen; 365 are reported wounded. The Israeli deaths include 3 women and 2 IDF soldiers; several dozen have been injured.

A spokesperson for the Palestinian health ministry in Gaza reported that 43% of those killed by Israeli airstrikes were children and women.

According to Israeli Prime Minister Benjamin Netanyahu, about 15 (out of the 65 Gazans killed) were militants.

Israeli military sources says that Gaza resistance groups have fired over 1,000 rockets toward Israel; 85-90 percent were intercepted by Israel’s Iron Dome missile defense system – a system that the US funds at $500 million a year.

Gazan rockets, which were first launched in 2001 after Israeli airstrikes had killed 570 Palestinians, have killed a total of 33 Israelis. During the same period, Israeli air attacks have killed over 4,000 Gazans.

Israeli PM Benjamin Netanyahu said the resistance groups in Gaza are “people of darkness [who] have blood on their hands.” He added that the massive damage and death so far are “just the beginning. We will hit them with strikes they have never dreamed of.”

The Israeli military says that it is “trying to minimize civilian casualties in Gaza” and “will investigate” reports of Palestinian children that have been killed.

The “investigations” carried out by the military whitewashing mechanism, under the leadership of the Military Advocate General (MAG), are meaningless other than their role in aiding Israel’s effort to silence international criticism.

In Jerusalem, where Israel is in a standoff with Palestinian worshipers and protesters, Israeli PM Benjamin Netanyahu vowed to use “an iron fist if needed” to stop Palestinian efforts, as they demonstrate against the restrictions Israel has placed on Muslim access to their holy places, and against the imminent expulsion of Palestinian families from the Sheikh Jarrah neighborhood of Jerusalem.

US State Department spokesman Ned Price said in a briefing Tuesday that “Israel has the right to defend itself,” but declined to answer a question on whether Palestinians also have that right.

He also did not comment on the deaths of Palestinian children, as he claimed they had not yet been independently confirmed.

The White House condemned the rocket attacks, declaring Israel’s right to defend itself, without addressing the death toll in Gaza. Secretary of State Antony Blinken emphasized the need for both sides to “enjoy equal measures of freedom, security, prosperity, and democracy.”

In the 2014 Israel-Gaza violence, Gaza’s death toll at the hands of Israel was 2,250, while Palestinian resistance groups killed 73 Israelis.

70% of Gaza’s population are from Palestinian refugee families who were forcibly expelled  from their homes and land during Israel’s founding war in 1948, their property confiscated during Israel’s ethnic cleansing campaigns.

The situations in Gaza, Jerusalem, and throughout Israel/Palestine are unfolding. If Americans Knew will continue to update our readers.

Israel’s ongoing attacks on Gaza are the worst the enclave has seen since 2014, when Israeli forces killed 2,200 Palestinians, and Palestinian resistance fighters killed 72 Israelis. One recent Israeli strike alone made about 80 families homeless. As the deaths, injuries, and damage climb, Palestinian resistance groups launch rockets into Israel.

(This is an update to yesterday’s report.)

The number of Palestinians killed by Israeli airstrikes on Gaza now appears to stand at 27 – at least 8 of them children* – as Israel continued its attacks on Tuesday and the early hours of Wednesday.  In addition, Israeli forces reportedly shot dead a young Palestinian man in the West Bank city of Nablus. In retaliation, resistance groups in Gaza have launched hundreds of rockets toward Israel, killing 5 in Israel.**

Over 175 Palestinians and more than two dozen Israelis were also injured.

Head of the government information office for Gaza, Salameh Marouf, declared that 56 Israeli airstrikes had utilized over 120 missiles “against civilian targets,” including near two schools, a Covid quarantine center, 15 homes, and 6 factories.

An Israeli missile assassinated a Hamas military leader on Tuesday, along with his wife; 25 other Palestinians were wounded in the blast.

The Palestinian Health Ministry reported that the Israeli army attacked buildings adjacent to a hospital in Gaza, damaging the hospital as well as the other buildings – a violation of international law and a possible war crime. [NOTE: Israel is currently under investigation for war crimes at the International Criminal Court.]

Israeli forces destroyed a 12-story residential tower in Gaza housing 80 families and an office for Gaza’s civilian political leadership. IMEMC reports that residents had just evacuated. No casualties were reported, but somewhere in the range of 600 men, women, and children are estimated to have been made homeless by the attack.

The Times of Israel noted that on Monday Israel closed, without warning, the Kerem Shalom commercial crossing between Gaza and Israel. The crossing, completely controlled by Israel, is the only entry point for goods, including food and humanitarian aid. Erez, the only residential crossing, is also closed until further notice. Erez is the only route for medical patients to get treatment outside Gaza.

Israel’s additional ban of all fishing in the Mediterranean Sea only adds to Gazans’ food insecurity.

Gazan rockets, which were first launched in 2001 after Israeli airstrikes had killed 570 Palestinians, have killed a total of 32 Israelis. During the same period, Israeli air attacks have killed over 4,000 Gazans.

Hamas has signaled its solidarity with Palestinians in Jerusalem, which has been facing its own crisis.

The city has for several weeks been a flashpoint, as Israel has severely hindered Palestinian movement, and Israeli forces have injured approximately 400 Palestinian worshipers and protesters. The Palestinian neighborhood of Sheikh Jarrah has been the site of additional protests, as a number of families face imminent eviction to make room for illegal Israeli settlers to take over their homes.

Israeli Prime Minister Benjamin Netanyahu announced Tuesday that the Gazan resistance “will pay a heavy price for their belligerence,” adding, “both the might of the attacks and the frequency of the attacks will be increased.”

The White House condemned the rocket attacks, declaring Israel’s right to defend itself, without addressing the death toll in Gaza; Secretary of State Antony Blinken emphasized the need for both sides to “enjoy equal measures of freedom, security, prosperity, and democracy.”

* This number reflects new information from a just-released investigation by Defense for Children International-Palestine.

** One was an Indian citizen.