You Are Here: Home → Friday saw an escalation of Israeli violence against Palestinians: headlines

Friday saw an escalation of Israeli violence against Palestinians: headlines 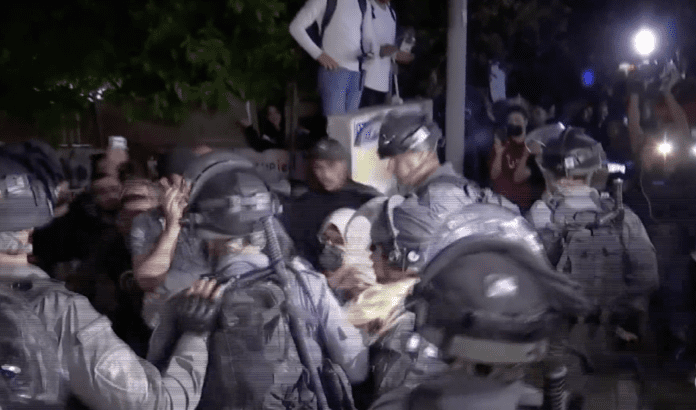 Tensions have been running especially high in Israel and the occupied Palestinian Territories, as Israel violently clamps down on Palestinian protests against occupation and land confiscation and other human rights violations. Read these short reports, all from Friday, May 6th.

The Palestinian Red Crescent Society (PRCS) has confirmed that Israeli soldiers injured overnight 205 Palestinians, including some who were injured in the eyes, during protests that erupted after dozens of soldiers and police officers invaded the Al-Aqsa Mosque, in occupied Jerusalem. The soldiers also abducted and detained many Palestinians.

The PRCS said some of the wounded Palestinians suffered injuries to their eyes, including one who was injured in both eyes, in addition to others who were shot in the genitals.

The latest escalation started on Friday evening during the Iftar, when dozens of soldiers surrounded the al-Qibli mosque, in the Al-Aqsa compound, and cut the electricity before firing gas bombs, concussion grenades, and rubber-coated steel bullets at the Palestinians, including the elderly, children, and women.

The soldiers also attacked the clinic of Al-Aqsa and fired gas bombs at worshipers in Bab ar-Rahma mosque.

Israeli occupation police broke into the courtyards of the Al-Aqsa Mosque in the Old City of occupied Jerusalem, according to witnesses.

Dozens of worshipers were also arrested by the attacking forces.

The police attack on the mosque compound sparked clashes with worshipers, and police shut down several gates leading to the courtyards of the mosque denying access of worshipers from outside of the compound to the holy site.

[NOTE: for more on recent Israeli violence in and around Jerusalem, read this, this, this.]

For the third night in a row, Israeli soldiers forced their way into the neighbourhood as Palestinians and activists settled down to break their fast in solidarity with the 40 Palestinians, including ten children, who face imminent risk of being kicked out from their homes in the neighbourhood to make way for illegal settlers. 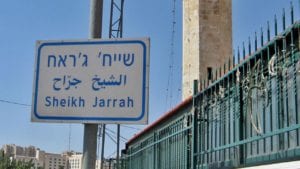 They also sealed off the neighbourhood in an attempt to prevent residents from other areas in Jerusalem from accessing it and detained at least six Palestinians, including Secretary-General of Fatah Shadi Mtour.

Palestinian families facing forcible eviction from their homes in occupied East Jerusalem’s Sheikh Jarrah neighbourhood yesterday rejected the Israeli Supreme Court’s proposal to reach a deal with Jewish settlers regarding the ownership of their homes.

Last Sunday, the Supreme Court gave the families until Thursday to reach a deal with Israeli Jewish settlers; requiring them to pay the Israeli settlers rent for their homes until the current owners pass away and then the properties would be assigned to the settlers, not to their heirs.

However, the decision was instead delayed until Monday, Israel’s Jerusalem Day, which celebrates the occupation of East Jerusalem following the 1967 war.

Currently, there are 38 Palestinian families living in Sheikh Jarrah, four of them facing imminent eviction, while three are expected to be removed on 1 August.

A spokesperson for Sheikh Jarrah families, Aref Hammad, said the families have appealed to the Supreme Court, where three judges were supposed to hear the case, but only one judge was appointed to the case.

“The judge suggested that we negotiate with the settlers, but she did not propose any alternative,” he added.

[NOTE: for more on the situation in Sheikh Jarrah, read this.]

The soldiers also attacked dozens of Palestinians in several parts of East Jerusalem, including Bab Hotta and Bab al-Amoud.

In addition, the soldiers assaulted Palestinians and international peace activists in Sheikh Harrah, after isolating it, and allowed groups of colonists to invade it.

The soldiers also assaulted and abducted dozens of Palestinians, including a photojournalist identified as Mahmoud Ma’tan, who was detained for several hours and was released after the Police impose a fine on him and forced him out of Jerusalem.

Many journalists were also assaulted by the soldiers and the police, including Abdul-Afo Bassam and Mohammad Abu Sneina.

It is worth mentioning that Israeli sources said seventeen soldiers were injured during the protests in Sheikh Jarrah and the Old City.

On Saturday at dawn, the soldiers stormed and ransacked many homes in Jerusalem, and attacked dozens of Palestinians near Al-Aqsa Mosque, before abducting at least thirteen Palestinians.

The invasions of homes largely took place in the Old City, the Suwwana neighborhood, Ras al-Amoud, Silwan, and al-‘Isawiya.

[NOTE: for more on Israeli invasions of Palestinian homes, read this, this.]

Israeli soldiers killed, on Friday morning, two Palestinians, and seriously injured a third, near the Salem Israeli military roadblock, close to the northern West Bank city of Jenin; the army claimed the Palestinians fired live rounds at the soldiers and were killed in the ensuing exchange of fire. 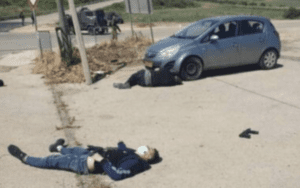 Israeli media sources said the exchange of fire took place at a bus stop near the Salem colonialist outpost, outside the Salem military base.

They added that the Palestinians allegedly used improvised Carl Gustave rifles (known as Carlo) in the attack, before they were shot and killed, and stated that the incident did not lead to injuries among the soldiers.

Following the shooting, Palestinian ambulances rushed to the scene, but the soldiers did not allow them to reach the Palestinians.

Israeli Ynet News said two of the Palestinians were instantly killed during the exchange of fire, and one was injured before he was taken to the HaEmek hospital in Afula, where his condition has been described as very serious.

It is worth mentioning that some Israeli media agencies said the three Palestinians were shot dead.

Following the fatal shooting, the soldiers closed the entire area, forced the Palestinians away, and attacked Palestinian journalists.

Israeli military analysts said the shooting could just be the start of a serious escalation in the West Bank, including Jerusalem, and added that the shooting seems to have been carried out by a small cell, however, could be the start for more escalation especially amidst the increasing tension in Jerusalem.

* This is a developing story.

[NOTE: for more on Israeli shootings of Palestinians at checkpoints and roadblocks, read this, this, this.]

For a complete list of Palestinians and Israelis killed since 2000, go here.

Many Palestinians Injured by Israeli Military Violence In Beit Dajan

Israeli soldiers injured, Friday, many Palestinians during the weekly procession in Beit Dajan village, east of the northern West Bank city of Nablus.

Salim Abu Jaish, a member of the Land Defense Committee in Beit Dajan, said the Palestinians marched towards their lands where the illegal Israeli colonists installed an outpost on their lands.

Abu Jaish added that the soldiers resorted to the excessive use of force against the protesters and fired many gas bombs and rubber-coated steel bullets.

Several Palestinians suffered the effects of tear gas inhalation, before receiving treatment by field medics, while one was moved to a hospital after being shot in the leg.

Furthermore, the Israeli bombs cause fires in olive orchards and farmlands in the eastern part of the village.

The protest was attended by hundreds of Palestinians who gathered in the center of the village before marching towards their lands.

The Palestinians in Beit Dajan hold weekly nonviolent processions after illegal Israeli colonialist settlers installed an outpost on their lands in October of the year 2020.

[NOTE: for more on Israeli settlers confiscating and living on Palestinian land, read some of these.]

Israeli soldiers attacked, Friday, many Palestinian journalists and broke a camera for Palestine TV, near the Salem military base, west of the northern West Bank city of Jenin, while reporting on the death of two young men who were killed by the army.

The WAFA Palestinian News Agency said the soldiers closed the entire area and assaulted many journalists while trying to force them away.

It added that the soldiers assaulted Palestine TV cameraman Sakher Zawatia, and smashed his camera during the attack against the journalists, in addition to firing many gas bombs at them.

The Israeli army deployed dozens of additional soldiers around the military base and its surroundings, after isolating the entire area.

The attacks took place after the soldiers killed, on Friday morning, two Palestinians, and seriously injured a third, near the Salem Israeli military roadblock, after the military claimed they fired live rounds at the soldiers and were killed in the ensuing exchange of fire.

[NOTE: for more on Israeli attacks on journalists, read this, this, this.]

Minwer Bani Shamsa, the secretary of the Fateh Movement in Beita, said the Palestinians came from the village, in addition to Qabalan and Yitma towns, and performed prayers on their lands in Abu Sbeih Mountain.

Bani Shamsa added that the soldiers resorted to the excessive use of force against the protesters and fired gas bombs, concussion grenades, and rubber-coated steel bullets at them, causing several injuries.

The Palestinians have been protesting ongoing attempts by the illegal colonialist settlers to install an outpost on their lands in Abu Sbeih Mountain.

[NOTE: for more on Israeli violence against peaceful protesters, read this, this, this.]

A large military force invaded, on Friday at dawn, Turmus Ayya town, north of the central West Bank city of Ramallah, before storming the home of a Palestinian detainee, suspected of killing an Israeli settler, last Sunday, and took measurements of the property in preparation for demolishing it.

Media sources said the soldiers surrounded the home of Montaser Shalabi, 47, who is believed to be behind the fatal shooting that led to the death of an Israeli colonialist settler, identified as Yehuda Guetta, 19, and detained his entire family in one room, before ransacking the property and taking measurements in preparation for detonating it.

During the invasion, the soldiers fired many live rounds, rubber-coated steel bullets, gas bombs, and concussion grenades at Palestinian protesters.

In a statement, the Israeli army said it conducted the invasion into Turmus Ayya to take the needed measurement of the family home of the Palestinian who carried the shooting out, also leading to the injury of two setters.

It is worth mentioning that Shalabi was taken prisoner two days ago during an Israeli invasion into Silwad town, northeast of Ramallah. The Israeli army said Shalabi was mildly injured by army fire during the invasion.

The army and Israel’s Intelligence Agency said Shalabi is not a member of any Palestinian faction, and that he was moved to an interrogation center run by the Shabak.

It is worth mentioning that Shalabi is a father of seven children, and is also a bearer of American citizenship. The Israeli Security Agency said the Shalabi comes from one of the wealthiest families in Ramallah.

[NOTE: for more on Israeli demolition of Palestinian homes, read this, this, this.]