You Are Here: Home → BREAKING: Israeli airstrikes on Gaza kill 21, including 9 children 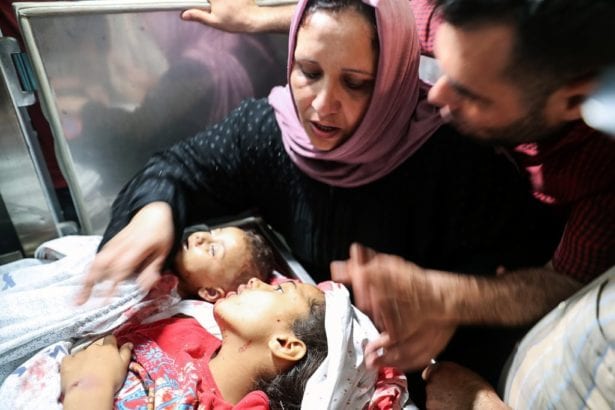 One of several images posted today from Gaza by Shehab News Agency (warning: some of the images are disturbing), apparently from Israel’s attack on Gaza Monday, May 10, that killed at least 21 Palestinians.

Israeli airstrikes have killed at least 21 Palestinians in Gaza today, the violence coming on the heels of a crackdown on Jerusalem’s Palestinians in which hundreds have been hospitalized.

[Update, May 11: 27 Palestinians and 2 Israelis have now been killed.]

[Update, May 11: 28 Palestinians, including 10 children, and 2 Israelis have been killed.]

[Update, May 12 (8:50 AM PST):  48 Palestinians, including 14 children and three women, according to the Health Ministry. More than 300 people have been wounded, including 86 children and 39 women. Six Israelis, including a soldier, three women and a child, were killed, and dozens of people were wounded. Additional info here.]

The Gaza Health Ministry reported that Israeli airstrikes killed 20 Palestinians Monday, 9 of them children, according to reports from Al Jazeera, Ha’aretz, the Gaza Post, and other news agencies. WAFA News Agency has just raised the death toll to 21.

An Israeli military spokesperson revealed that the air force had targeted “a Hamas military operative”; Hamas sources confirmed the deaths of three of their operatives, according to the Washington Post.

The spokesperson went on to say “we have started, and I repeat started, to attack military targets in Gaza,” indicating that the assault was in response to several dozen rockets that Palestinian resistance groups had fired toward Israel over the last few days. One Palestinian missile struck a civilian vehicle, injuring one Israeli; another hit a house, with no reported injuries, said Reuters.

Palestinian resistance leaders on Friday declared Gaza’s solidarity with Palestinians in Jerusalem, and deployed the rockets “in response to the enemy’s aggression in the holy city.”

Gazan rockets, which were first launched in 2001 after Israeli airstrikes had killed 570 Palestinians, have killed a total of 30 Israelis. During the same period, Israeli air attacks have killed more than 4,000 Gazans.

The Washington Post quotes Israeli Prime Minister Benjamin Netanyahu as saying, “Whoever attacks us will pay a heavy price,” adding that Israel’s response could ”continue for some time.”

Jerusalem has for several weeks been a flashpoint as Israel has severely hindered Palestinian movement and Israeli military has injured hundreds of worshipers and protesters. The Palestinian neighborhood of Sheikh Jarrah has been the site of additional protests, as a number of families face imminent eviction to make room for illegal Israeli settlers to take over their homes.

A report on IMEMC states that Israeli jets fired missiles at a large gathering of Palestinian civilians on Al-Masryin Street, causing a number to be  hospitalized.

Some of the first reported dead were

This is a developing story.

To see a full list of Palestinians and Israelis killed since 2000, visit our Timeline.