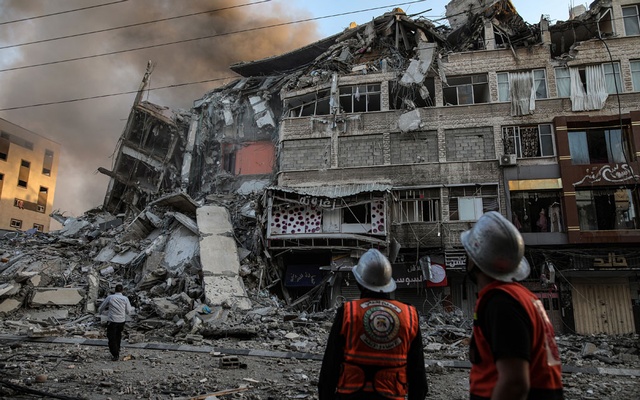 As the death toll in Gaza climbs, safety officials inspect damaged buildings in Gaza City following an Israeli airstrike on May 12, 2021. Gazans say that Israeli strikes early Wednesday over the course of an hour felt like the most intense yet, after a long night interrupted by rounds of retaliation.

Early Friday, the Israeli military said air and ground troops struck Gaza in what appeared to be the heaviest attacks yet. Masses of red flames illuminated the skies as the deafening blasts from the outskirts of Gaza City jolted people awake. The strikes were so strong that people inside the city, several kilometers away, could be heard screaming in fear.

“I said we would extract a very heavy price from Hamas,” Prime Minister Benjamin Netanyahu said in a videotaped statement. “We are doing that, and we will continue to do that with heavy force.”  (Deaths now said to be 109 Gazans, many children.)

An Israeli army spokesman says that its warplanes have hit 600 targets in Gaza since the conflict began, and the military is preparing for a possible ground assault on Gaza.

Israeli spokespeople – and U.S. media – continue to claim that Israel’s strikes are against military targets, but the vast majority of those killed & injured in Gaza are civilians.

US President Biden’s new ambassador to the UN, Linda Thomas-Greenfield, pledged during her confirmation hearings that she would “stand with Israel.”

An 80-year old woman says she lost 30 years of memories: “I can’t stop crying. I lived 30 years in this home, all my memories and life were there.”

CNN reports that the death toll is now at 65 Palestinians and 6 Israelis, plus one foreign worker in Israel.

The Palestinian deaths include at least 17 children, 5 women (one of them pregnant), and 1 senior citizen; 400 are reported wounded. The Israeli deaths include 3 women and 2 IDF soldiers; several dozen have been injured.

A spokesperson for the Palestinian health ministry in Gaza reported that, as of midday Wednesday, 43% of those killed by Israeli airstrikes were children and women.

According to Israeli Prime Minister Benjamin Netanyahu, about 16 (out of the 83 Gazans killed) were militants.

Israeli military sources says that Gaza resistance groups have fired over 1,000 rockets toward Israel; 85-90 percent were intercepted by Israel’s Iron Dome missile defense system – a system that the US funds at $500 million a year.

Gazan rockets, which were first launched in 2001 after Israeli airstrikes had killed 570 Palestinians, have killed a total of 33 Israelis. During the same period, Israeli air attacks have killed over 4,000 Gazans.

Israeli PM Benjamin Netanyahu said the resistance groups in Gaza are “people of darkness [who] have blood on their hands.” He added that the massive damage and death so far are “just the beginning. We will hit them with strikes they have never dreamed of.”

The Israeli military says that it is “trying to minimize civilian casualties in Gaza” and “will investigate” reports of Palestinian children that have been killed.

The “investigations” carried out by the military whitewashing mechanism, under the leadership of the Military Advocate General (MAG), are meaningless other than their role in aiding Israel’s effort to silence international criticism.

In Jerusalem, where Israel is in a standoff with Palestinian worshipers and protesters, Israeli PM Benjamin Netanyahu vowed to use “an iron fist if needed” to stop Palestinian efforts, as they demonstrate against the restrictions Israel has placed on Muslim access to their holy places, and against the imminent expulsion of Palestinian families from the Sheikh Jarrah neighborhood of Jerusalem.

US State Department spokesman Ned Price said in a briefing Tuesday that “Israel has the right to defend itself,” but declined to answer a question on whether Palestinians also have that right.

He also did not comment on the deaths of Palestinian children, as he claimed they had not yet been independently confirmed.

The White House condemned the rocket attacks, declaring Israel’s right to defend itself, without addressing the death toll in Gaza. Secretary of State Antony Blinken emphasized the need for both sides to “enjoy equal measures of freedom, security, prosperity, and democracy.”

In the 2014 Israel-Gaza violence, Gaza’s death toll at the hands of Israel was 2,250, while Palestinian resistance groups killed 73 Israelis.

70% of Gaza’s population are from Palestinian refugee families who were forcibly expelled  from their homes and land during Israel’s founding war in 1948, their property confiscated during Israel’s ethnic cleansing campaigns.

The situations in Gaza, Jerusalem, and throughout Israel/Palestine are unfolding. If Americans Knew will continue to update our readers.

For additional background and earlier reports on the situation, please read this.