You Are Here: Home → “Progressive Except Palestine” groups gang up on Bernie Sanders 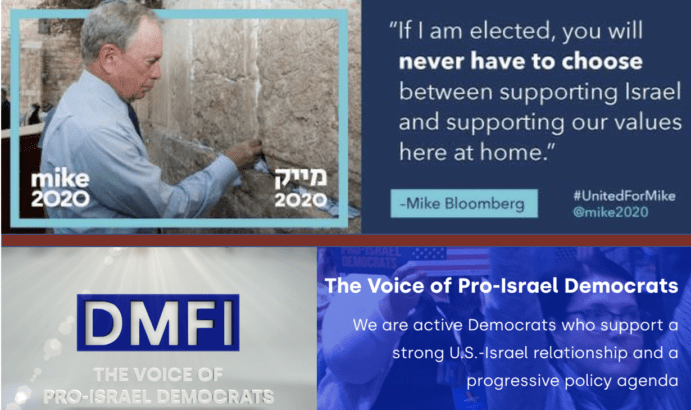 Mike Bloomberg and the Democratic Majority for Israel PAC (DMFI) are progressive, except when it comes to the issue of justice for Palestinians.

Mike Bloomberg is courting pro-Israel, Jewish voters with AIPAC-type promises to keep Israel great, and progressive positions on everything else. The Democratic Majority for Israel PAC (DMFI) supports similarly PEP (Progressive Except Palestine) candidates. Both have it out for Bernie Sanders.

In the battle for the 2020 Democratic nomination, candidate Bernie Sanders’ campaign seems to resonate with American voters, making him currently the one to beat. As Mike Bloomberg and political action committee Democratic Majority for Israel (DMFI) target Sanders, they find themselves at odds with the majority of Democratic voters on the issue of Israel/Palestine.

According to recent surveys, most Democratic constituents are significantly more critical of Israel than Bloomberg (as well as other 2020 Dem candidates) and DMFI. A 2019 Pew poll revealed that just 26% of Democrats have a favorable view of Israel’s government (56% have a favorable view of Israelis as a people). Another 2019 poll found that a full 71% of Democrats support placing conditions on US aid to Israel. And almost half of Democratic voters who are familiar with the BDS (boycott, divest, and sanction) movement support it.

So while support for Israel remains a priority for many politicians, it is decidedly not for many voters. Their migration toward Sanders makes sense.

Senator Sanders, who identifies as “a proud Jew,” is considered the most pro-Palestinian presidential candidate in the race. His platform meshes with most Democrats: he has expressed willingness to place conditions on America’s $3.8 billion a year in aid to Israel, called Israel’s attacks on occupied Palestinians “reprehensible,” defined the Netanyahu government as “racist,” and supports Americans’ right to boycott Israel (although he personally does not support the BDS movement). (For more on Sanders’ and other candidates’ positions on Israel/Palestine, read this.)

The Democratic Majority for Israel positions itself as progressive, with a platform that includes gun safety, immigrant and LGBTQ rights, and the environment. But when it comes to Middle East policy, the organization clashes with progressives.

According to DMFI president Mark Mellman,

the overwhelming majority of elected Democrats are pro-Israel and we [DMFI] intend to keep it that way…there is a small group of outliers who are trying to change that and we are here to do battle with them.

Mellman added elsewhere that the organization’s mission is to see to it that the “few discordant voices” in Congress (of which Sanders is clearly one), don’t “metastasize into a bigger problem.”

DMFI’s position lines up with conventional pro-Israel groups like American Israel Public Affairs Committee (AIPAC – read about its influence here; and/or watch this).

AIPAC, which draws much (though not all) of its support from the Republican party, may seem like an unlikely colleague for DMFI. But in Israel-partisan circles, Progressive Except Palestine is commonplace.

While the Republican party doesn’t grapple with as much erosion of Israel support as the Democrats, the GOP has its own set of challenges.

As the Jerusalem Post reported, a growing number of younger Republicans oppose policies of the Israeli government:

The survey showed that Republicans over the age of 65 are the only age group in which a majority (57%) have a favorable view of the Israeli government. Among the youngest adults (those younger than 30), just 27% view Israel’s government favorably.

DMFI founders tried to downplay their close ties with AIPAC, but it hasn’t gone unnoticed. Spokespeople for the liberal Jewish IfNotNow, called DMFI “a rebrand for AIPAC, which has been losing progressives over the past decade,” and reaffirmed that “[DMFI’s] foreign policy goals…are increasingly out of touch with the Democratic Party.”

Bottom line: the two organizations – one progressive and Democratic, the other seen by progressives as predominantly conservative and Republican – actually share a goal: that of maintaining strong support for Israel among elected officials, whether voters want it or not.

Democratic Majority for Israel has created an ad that does not mention Israel, but questions the electability and health of Israel’s biggest critic. The ad will see almost $700,000 worth of airtime in the coming days,

The source of DMFI’s funding is not known, and a spokesperson says the organization is unwilling to disclose anything until it is required by law.

The organization’s website appears to be banking on large donations, while Sanders’ campaign famously runs on many, small contributions.

The source of billionaire Michael Bloomberg’s funding, on the other hand, is well-known. His TV ads are estimated to be costing him personally over $200 million – $11 million for a Super Bowl ad alone.

“I’m not the only Jewish candidate running for president,” he said on a recent campaign stop,  “but I am the only one who doesn’t want to turn America into a kibbutz” – a reference to Sanders’ stint an Israeli collective community (kibbutzim have been described as “a combination of socialism and Zionism”).

Sanders, who self-describes as a socialist, has floated the idea of making Israel’s $3.8 billion in aid from the US contingent on improvement in its treatment of Gaza, even funneling some of the aid money to Gaza (read about Israel’s blockade and ruinous military attacks on Gaza here).

Bloomberg responded to these developments with a vow to voters:

As president, I will always have Israel’s back. I will never impose conditions on our military aid, including missile defense no matter who is prime minister…I will never walk away from our commitment to guarantee Israel’s security…If I am elected, you will never have to choose between supporting Israel and supporting our values here at home. I will defend both.

Mike Bloomberg, DMFI, and many other progressive political players, seek to unseat Donald Trump in 2020, while remaining faithful to Trump’s stance on Israel: one that ignores that state’s disregard for US, international, and humanitarian law, and dismisses one group’s human rights in favor of another’s settler colonial aspirations.

It remains to be seen whether Bernie Sanders’ popularity can withstand the onslaught.