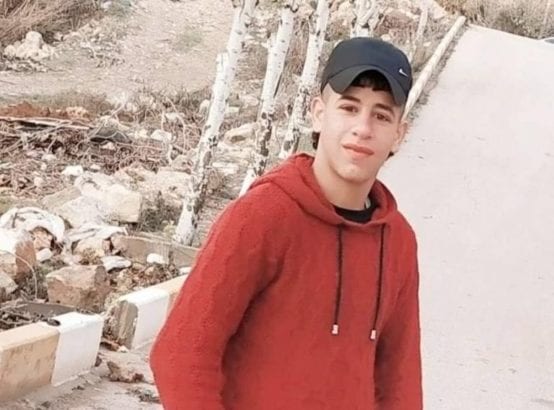 Israeli soldiers shot a Palestinian teen in the heart, attacked school children in Bethlehem, attacked fishermen in Gaza, abducted a mayor, children, and others, demolished homes, etc. in the past day and a half…

A Palestinian boy identified as Mohammad Salman al-Haddad, 17, was shot and killed, on Wednesday, during confrontations between Palestinian youths and Israeli soldiers in the southern West Bank city of Hebron, according to the Palestinian Ministry of Health. Witnesses said clashes broke out in Bab al-Zawiyeh, where the heavily-barricaded Israeli-controlled […]

Israeli soldiers attacked, Wednesday, many Palestinian schoolchildren in Teqoua’ town, east of Bethlehem, south of occupied Jerusalem in the West Bank. Media source said the soldiers fired many gas bombs and concussion grenades at the student while heading to school. Taiseer Abu Mfarreh, a teacher of Teqoua’ Secondary School, said […]

Israeli navy ships attacked, Wednesday, Palestinian fishermen in Gaza territorial waters, near Gaza city, by firing live rounds, and using water cannons against them and their bots. Media sources said the navy attacked the fishing boats only three nautical miles from the shore, by firing many live rounds, in addition […]

The Palestinian Prisoners’ Society (PPS) has confirmed that Israeli soldiers abducted, on Wednesday at dawn, fifteen Palestinians, including two children and the mayor of Beit Kahil town, in the occupied West Bank. The PPS said the soldiers stormed and violently searched dozens of homes across the West Bank, and interrogated […]

Israeli Army Fires Missiles Into An Area In Khan Younis

The Israeli army fired, on Wednesday at dawn, at least four missiles into a site, west of Khan Younis, in the southern part of the Gaza Strip. Media sources said the missiles struck a building, causing property damage, without leading to civilian casualties. They added that the targeted site is […]

The Israeli army, on Tuesday, notified a number of Palestinians in the northern Jordan Valley village of Fasayil of its intention to demolish their under–construction houses and animal barns, under the pretext that they were built without Israeli permission. WAFA correspondent stated that the Israeli military has been intensifying its […]

Palestinians Choke on Tear-Gas Near Jenin

According to Shehab News Agency, a number of Palestinian civilians were suffocated on tear-gas, Tuesday evening, when the Israeli occupation army erected a military roadblock on Jenin Street, at the Nablus/Jaba junction. When Palestinians protested, Israeli forces fired tear-gas canisters, rubber-coated steel bullets, and concussion grenades towards the civilians. Also, […]

Israel to Demolish Palestinian Home in Jenin for Second Time

A Palestinian resident of Jenin, northern occupied West Bank, was informed by the Israeli army, on Tuesday, that the house he rebuilt after it was demolished in 2018, will be demolished once again, the Palestinian News and Info Agency (WAFA) reported. Homeowner Jamal Qumba told WAFA that he received a […]

Israeli soldiers demolished, Wednesday, a Palestinian home in Beit Hanina neighborhood, north of occupied East Jerusalem, under the pretext of being built without a permit. The owner of the demolished property, Nidal Shawamra, said the soldiers and personnel of the City Council, broke into his home and forced him, long […]

PPS: Twelve Palestinians Detained From West Bank, Including a Mother of Four

According to the Palestinian Prisoners’ Society (PPS), the Israeli occupation forces arrested 12 Palestinian civilians from the occupied West Bank, on Tuesday night, including a mother of four. The PPS said that six Palestinian citizens were arrested from several towns in the Hebron governorate, including a woman. 1. Muhammad Mahmoud […]