You Are Here: Home → US Senators meet with Jewish leaders in semi-secret annual event 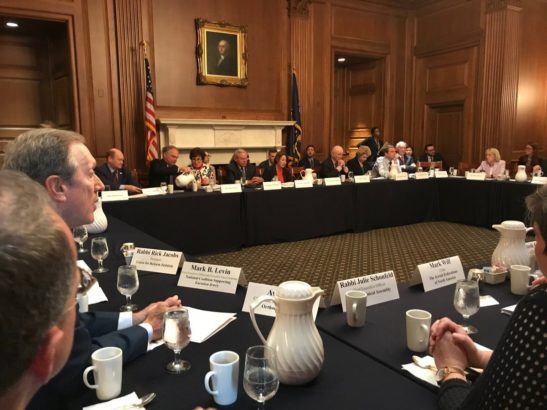 An article in the Times of Israel reports that “Jewish leaders are meeting with Senate Democrats today.” According to the report, this is an annual event. A quarter of the Senate was in attendance (see list below).

All except one of the organizations represented by the Jewish leaders at the meeting advocate for Israel.

Several of the organizations participating are focused on preventing the erosion of support for Israel among Democratic voters. Recent polls show that the large majority of progressive Americans now support Palestinian human rights.

Many of the meeting participants, both Senators and Jewish leaders, are particularly known for their pro-Israel work. Senate Minority Leader Chuck Schumer calls himself a “guardian of Israel.”

The meeting does not seem to have been announced publicly ahead of time, and staffers at Senate offices contacted for this article were not aware of it.

The chair for the meeting is Democratic Senator Amy Klobuchar of Minnesota, a 2020 presidential candidate.

Klobuchar is a strong Israel supporter and announces on her website that she supported the $38 billion package to Israel. (This amounts to about $7,000 to Israel per minute; approximately $20,000 per Israeli family of four.)

Klobuchar’s office would not reveal the location or time of the meeting. It also would not provide the agenda.

The offices of other Senators reportedly participating in the meeting that were contacted for this article – Tim Kaine, Patty Murray, and Chris Koons – also refused to provide this information to the American public.

Nathan Diament, Executive Director for Public Policy for the Jewish Orthodox Union, posted a photo about the meeting on his Twitter account (see above), but didn’t clarify when the photo was taken.

Following are the meeting’s participants, according to Jewish Insider:

Bend the Arc’s Stosh Cotler  (Unlike the other organizations represented at the meeting, Bend the Arc has not taken a public stand on Israel-Palestine. A member of Bend the Arc’s executive board, Howard Welinsky, is active in AIPAC and chairs Democrats for Israel, Los Angeles. Stosh Cotler, on the other hand, once demonstrated against Israeli policies.)

JTA Washington DC bureau chief Ron Kampeas reports in his email news letter that in addition to discussing Israel and antisemitism, “The Orthodox Union and the Jewish Federations of North America talked up legislation that would increase funding for security grants to nonprofits. A bill under consideration in the Senate ups the current $50 million to $70 million, and one in the House brings it to $90 million.”

A 2014 article in the Jewish Forward reported that Jewish institutions got 94 percent of such grants.

Below is a chart of the seating arrangement for the meeting provided by Jewish Insider: 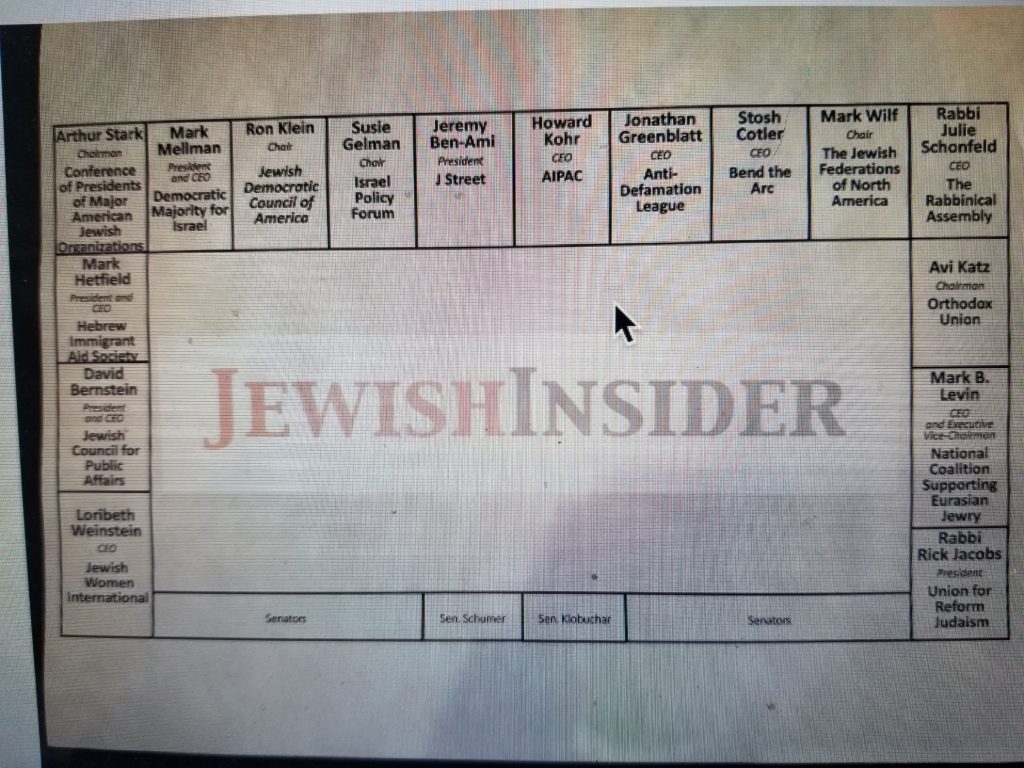 This article has been updated based on the Jewish Insider article’s update after the meeting, which listed more Senators than originally listed. It has also been updated with information from JTA’s The Tell email report, by Ron Kampeas. Although the meeting is now being called “off the record,” it appears that Jewish Insider had access to it and has provided some details here.

Articles about the pro-Israel lobby