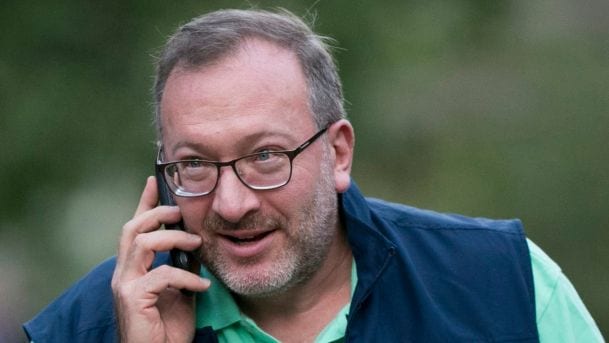 Behind the app that delayed Iowa’s voting results is a dark money operation funded by anti-Sanders billionaires. Its top donor, Seth Klarman, is a Buttigieg backer who has dumped money into pro-settler Israel lobby groups.

Sanders is the candidate who has taken the boldest stands in support of Palestinian human rights. Israel has a long, thoroughly documented history of human rights violations against Palestinians. (For info on Israel-Palestine see video below article.)

By Max Blumenthal, reposted from Grayzone

At the time of publication, twelve hours after voting in the Democratic Party’s Iowa caucuses ended, the results have not been announced. The delay in reporting is the result of a failed app developed by a company appropriately named Shadow Inc.

The delay in the vote reporting denied a victory speech to Sen. Bernie Sanders, the presumptive winner of the opening contest in the Democratic presidential primary. Though not one exit poll indicated that Buttigieg would have won, the South Bend, Indiana mayor took to Twitter to confidently proclaim himself the victor.

Iowa, you have shocked the nation.

By all indications, we are going on to New Hampshire victorious. #IowaCaucuses

The bizarre scenario was made possible by a mysterious voting app whose origins had been kept secret by Democratic National Committee officials. For hours, it was unclear who created the failed technology, or how it wound up in the hands of Iowa party officials.

Though a dark money Democratic operation turned out to be the source of the disastrous app, suspicion initially centered on former Hillary Clinton campaign manager Robby Mook and his Russiagate-related elections integrity initiative.

While Iowa Democratic Party Chairman Troy Price refused to say who was behind the failed app, he told NPR that he “worked with the national party’s cybersecurity team and Harvard University’s Defending Digital Democracy project…” Price did not offer details on his collaboration with the Harvard group, however.

The New York Times reported that this same outfit had teamed up with Iowa Democrats to run a “drill of worst-case scenarios” and possible foreign threats, but was also vague on details.

Robby Mook, the former campaign manager for Hillary Clinton’s failed 2016 presidential campaign, was the co-founder of Defending Digital Democracy. His initiative arose out of the national freakout over Russian meddling that he and his former boss helped stir when they blamed their loss on Russian interference. Mook’s new outfit pledged to “protect from hackers and propaganda attacks.”

He founded the organization with help from Matt Rhoades, a former campaign manager for Republican Mitt Romney whose public relations company was sued by a Silicon Valley investor after it branded him “an agent of the Russian government” and “a friend of Russian President, Vladimir Putin.” Rhoades’ firm had been contracted by a business rival to destroy the investor’s reputation.

As outrage grew over the delay in Iowa caucus results, Mook publicly denied any role in designing the notorious app.

Sorry, folks. I did NOT have anythjng to do with building the Iowa caucus app. I dont know anything about it, had no role in it, and dont own a company that makes mobile appa. Please contact @iowademocrats with questions about it.

.@RobbyMook, you may not have built the app, but the @nytimes is reporting that you were involved in stress testing it. 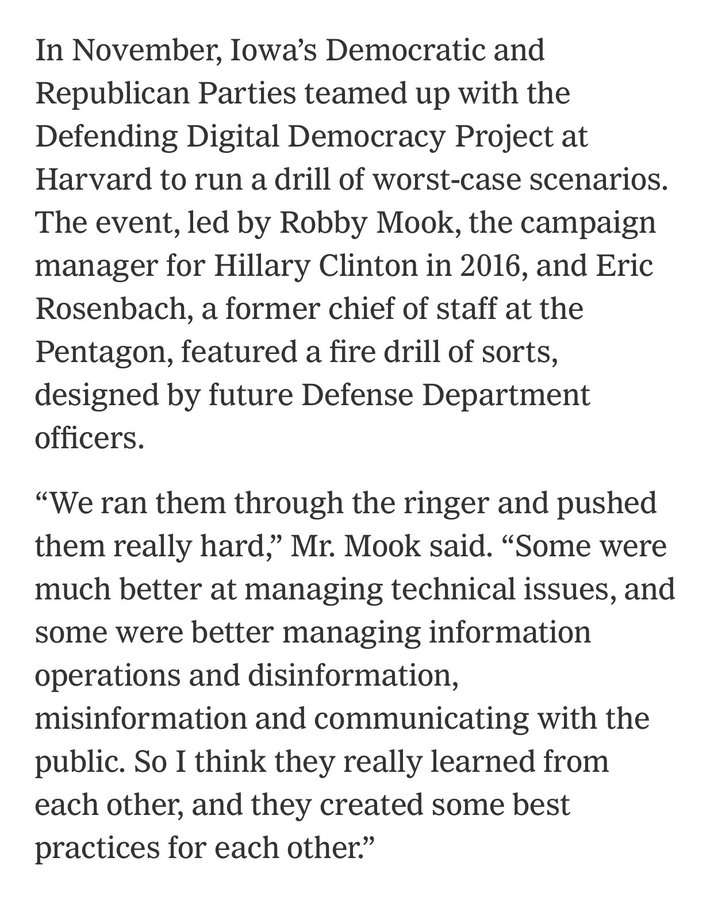 Hours later, journalist Lee Fang reported that a previously unknown tech outfit called Shadow Inc. had contracted with the Iowa Democratic Party to create the failed technology. The firm was comprised of former staffers for Obama, Clinton and the tech industry, and had been paid for services by the Buttigieg campaign.

According to Sludge, Pacronym’s largest donor is Seth Klarman. A billionaire hedge funder, Klarman also happens to be a top donor to Buttigieg and Amy Klobuchar.

Though he has attracted some attention for his role in the campaign, Klarman’s prolific funding of the pro-settler Israel lobby and Islamophobic initiatives has gone almost entirely unmentioned.

Seth Klarman is the founder of the Boston-based Baupost Group hedge fund and a longtime donor to corporate Republican candidates. After Donald Trump called for forgiving Puerto Rico’s debt, Klarman – the owner of $911 million of the island’s bonds – flipped and began funding Trump’s opponents.

The billionaire’s crusade against Trump ultimately led him to Mayor Pete’s wine cave.

By the end of 2019, Klarman had donated $5600 to Buttigieg and pumped money into the campaigns of Amy Klobuchar, Cory Booker and Kamala Harris as well.

The billionaire’s support centrist candidates appears to be not only by his own financial interests, but  by his deep and abiding ideological commitment to Israel and its expansionist project.

As I reported for Mondoweiss, Klarman has been a top funder for major Israel lobby outfits, including those that support the expansion of illegal settlements and Islamophobic initiatives.

Klarman was the principal funder of The Israel Project, the recently disbanded Israeli government-linked propaganda organization that lobbied against the Iran nuclear deal and backed the Israeli settlement enterprise.

Klarman has heaped hundreds of thousands of dollars on the Middle East Media Research Institute (MEMRI) and the American Jewish Committee. And he funded The David Project, which was established to suppress Palestine solidarity organizing on campuses across the US and battled to block the establishment of a Muslim community center in Boston.

Through his support for the Friends of Ir David Inc, Klarman directly involved himself in the Israeli settlement enterprise, assisting the US-based tax exempt arm of the organization that oversaw a wave of Palestinian expulsions in the occupied East Jerusalem neighborhood of Silwan.

Other pro-Israel groups reaping the benefits of Klarman’s generosity include Birthright Israel, the AIPAC-founded Washington Institute for Near East Policy, and the Foundation for the Defense of Democracies (FDD), a neoconservative think tank that helped devise Trump’s “maximum pressure” campaign of economic warfare on Iran.

Klarman is the owner of the Times of Israel, an Israeli media outlet that once published a call for Palestinian genocide. (The op-ed was ultimately removed following public backlash).

In recent weeks, Buttigieg has sought to distinguish himself from Sanders on the issue of Israel-Palestine. During a testy exchange this January with a self-proclaimed Jewish supporter of Palestinian human rights, the South Bend mayor backtracked on a previous pledge to withhold military aid to Israel if it annexed parts of the West Bank.

NEW: The day after Trump unveiled his plan green-lighting Israeli annexation and Netanyahu’s announcement of a cabinet vote on annexation this Tuesday, @PeteButtigieg backtracked on his repeated promise that the “U.S. will not foot the bill for annexation.” #StopFundingOccupation 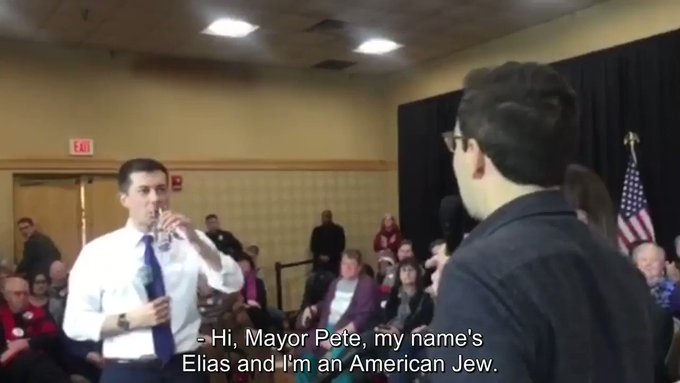 Another recipient of Klarman’s funding, Amy Klobuchar, has taken a strongly pro-Israel line, vowing to support Trump’s relocation of the US embassy from Tel Aviv to Jerusalem.

Like Klarman, Donald Sussman is a hedge funder who has channeled his fortune into Pacronym. He has given $1 million to the Super PAC and was also top donor to Clinton in 2016.

Sussman’s Paloma Partners operates through a series of offshore shell companies, and received tens of millions of dollars in the 2009 federal bailout of the banking industry.

His daughter, Democratic operative Emily Tisch Sussman, declared on MSNBC in September that “if you still support Sanders over Warren, it’s kind of showing your sexism.”

As Democratic elites like the Sussmans braced for a Bernie Sanders triumph in Iowa, a mysterious piece of technology spun out by a group they supported delayed the vote results, preventing Sanders from delivering a victory speech. And the politician many of them supported, Pete Buttigieg, exploited the moment to declare himself the winner. In such a strange scenario, the conspiracy theories write themselves.

Billionaire Seth Klarman, donor to Israel causes, is one of the largest holders of Puerto Rican debt

Klarman, who is Jewish and a registered independent, has donated more than $250,000 to around 80 Democratic candidates so far this year, the Forward can reveal……

In 2018, he’s only donated to one Republican campaign, that of Rep. Elise Stefanik, a moderate Republican in upstate New York. He gave her $2,700. In contrast, he’s given nearly $30,000 to Jewish Democratic challengers alone.

Out of about 60 races nationwide that experts expect to be competitive, nearly 40 of them have a higher than average Jewish share of the population. Because Jews tend to be more liberal, affluent and vote at higher rates than the general population, Democrats consider their active support an essential component of their strategy.

The party, which needs to flip at least 23 seats to retake the House, has seen about an eight-point advantage over Republicans in congressional polls. These trends, along with Trump’s job approval rating hovering barely north of 40%, have led some experts to see a clear path for a Democratic “wave” in November, helped along by a number of strong Jewish contenders in urban and suburban districts.

Apart from the Jewish candidates, he has given directly to at least 47 other House candidate and 14 running in the Senate. His largest single donation of $36,000 went to a PAC supporting Rep. Joe Kennedy’s reelection bid in Massachusetts…