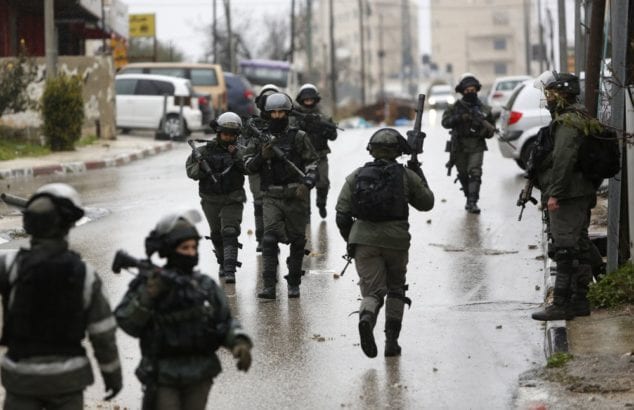 In this Wednesday, Jan. 9, 2019 file photo, Israeli forces deploy during a raid in the West Bank City of Ramallah. (AP)

Another typical day in the Palestinian Occupied Territories: Israeli soldiers invade villages, injure and abduct people of all ages, shell Gaza, and a boy dies from injuries from an Israeli attack in October…

Israeli soldiers invaded, Friday, Beit Ummar town, north of the southern West Bank city of Hebron, and attacked dozens of protesters, wounding one with a rubber-coated steel bullet, and causing dozens to suffer the effects of teargas inhalation. Media sources said the soldiers invaded ‘Aseeda area, near the illegal Karmie […]

Many Israeli colonists, illegally squatting on Palestinian lands near Nablus, invaded a village and shot one man with a live round after attacking a Palestinian home. Hazem Nasser, the head of Madama Village Council, south of the northern West Bank city of Nablus, said the attack was carried out by […]

Israeli soldiers abducted, Friday, two Palestinians, in addition to injuring one with a gas bomb in the shoulder, and caused many others to suffer the effects of teargas inhalation, near Tubas, in northeastern West Bank, during a nonviolent procession against the ongoing illegal Israeli colonialist activities. Media sources said dozens […]

Palestinian Child Dies From Serious Wounds He Suffered In October 2019

Palestinian medical sources have reported that a child died, Friday, from serious wounds he suffered in mid-October of 2019, after Israeli soldiers shot in southern Gaza. The sources said the child, Ala’ Hani al-Abbassi, 15, was shot by the soldiers with a high-velocity gas bomb in his head, east of […]

Israeli soldiers assaulted, on Friday at dawn, dozens of Muslim worshipers in the Al-Aqsa Mosque, in the occupied Palestinian capital Jerusalem, injured at least ten, and abducted three. Media sources said the Israeli army and the police stormed the courtyards of the Al-Aqsa Mosque compound and fired many concussion grenades […]