You Are Here: Home → Conditional aid to Israel is becoming mainstream for Dems 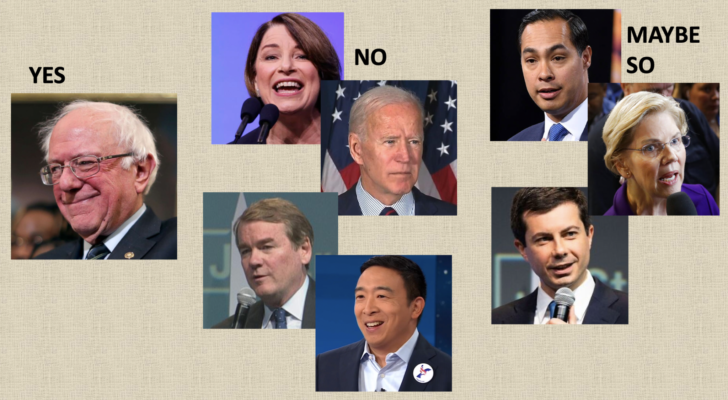 This week, Dem candidates discussed conditional aid to Israel with J Street, a nonprofit advocacy group that “organizes and mobilizes pro-Israel, pro-peace Americans who want Israel to be secure, democratic and the national home of the Jewish people.”

A new trend in the Democratic primary race (and throughout the US): flirting with the idea of conditioning aid to Israel. Some candidates seem willing, some not so much.

What used to be unthinkable is quickly becoming acceptable: making military aid to Israel conditional on dropping its plans to annex additional parts of the Palestinian territory.

J Street national conference moderators challenged Democratic presidential candidates to get on board with this “new normal” last week.

The organization self-describes as “pro-Israel, pro-peace,” and takes a more charitable approach to Palestinians than, for example, the American Israel Public Affairs Committee (AIPAC – read this and this), although many of J Street’s policy positions may be considered hawkish.

J Street opposes the nonviolent BDS movement for justice, as well Palestinian efforts to gain a hearing at the International Criminal Court, and has apparently never supported calls to investigate Israel’s attempt to sink the USS Liberty.

The body’s stated mission is to “advocate for policies that advance shared US and Israeli interest,” a problematic claim, given that Israeli and US interests often diverge. In reality, when this is the case, Israeli needs almost always win out.

Significantly, J Street’s pursuits do not consider Palestinian interests  (except as they contribute to Israeli interests).

Jeremy Ben-Ami, president of J Street, addressed the issue of aid at a press conference before the conference, revealing that the organization would push for the implementation of existing laws that stipulate how military aid may and may not be used (for example, the Leahy Laws). J Street does not favor a reduction in aid, which stands at $3.8 billion a year (and that costs Americans even more).

(It is worth mentioning that Congress has passed laws on conditioning aid to the Palestinians, and is considering additional legislation.)

A number of Democratic candidates were interviewed during the conference; others sent video messages.

NO to using aid as leverage

When questioned on the idea of making US military aid conditional, Amy Klobuchar answered straightforwardly, “I think we are at this moment and time where it is not a good idea to negotiate these things right now.” She did not provide reasons.

In February, the Jewish Telegraphic Agency (JTA) had named Amy Klobuchar the “go-to Democrat for the Orthodox.” She was nicknamed by Benjamin Netanyahu, “the Israeli Prime Minister of Minnesota.” The Times of Israel called her “the candidate most closely aligned with AIPAC.”

Joe Biden‘s video message did not address the issue of conditional aid, but on Thursday he was crystal clear in his comment to Wall Street Journal correspondent Sabrina Siddiqi: the idea of conditional aid to Israel is “absolutely outrageous” and would be a “gigantic mistake.” (Read more on Joe Biden here.)

Andrew Yang vowed in his brief video, “Under my administration, aid to Israel and Gaza would continue.”

Colorado Senator Michael Bennet – who said in June, “Israel is the one essential country on the planet,” told the J Street audience, “We should be doing everything we can to limit the settlements being built. I just wonder whether there are bigger ways for us think about how to [pressure Israel]…If we pick one instrument like that, in this town that is going to quickly become a partisan litmus test for where people are on Israel.”

Elizabeth Warren discussed the need to “apply pressure and create consequences for problematic behavior…For example…none of our aid should be used to support annexation.” She had said previously, “It is the official policy of the United States of America to support a two-state solution, and if Israel is moving in the opposite direction, then everything is on the table…Everything is on the table.” [For more on the two-state solution, see note at the end.] (Read more on Elizabeth Warren here.)

Julian Castro indicated a willingness to make aid conditional if it would compel Israel to back off from its annexation plans: “My hope is that we can work like crazy so we don’t get to that point,” he said. “I would not take it off the table.”

South Bend Mayor Pete Buttigieg, who had in June stated that he would “take steps to ensure that American taxpayers won’t help foot the bill [for annexation],” reiterated his position for J Street: “[W]e need to have the visibility to know whether U.S. funds are being used in a way that are not compatible with U.S. policy.” He added, “You can be committed to the U.S.-Israel alliance without being supportive of any individual choice by a right-wing government over there.”

Vermont Senator Bernie Sanders, who has been the strongest (albeit imperfect) ally of justice for Palestinians, went further than any of the other candidates, suggesting that some Israeli aid money should be diverted to Gaza.

He declared, “My solution is to say to Israel: you get $3.8 billion every year, if you want military aid you’re going to have to fundamentally change your relationship to the people of Gaza, in fact I think it is fair to say that some of that should go right now into humanitarian aid in Gaza.” (Read more on Bernie Sanders here.)

Sanders’ recommendation flies in the face of J Street’s position on aid to Israel, yet it drew loud applause and cheers from the audience.

While J Street’s courage in bringing the question of conditional aid front and center, the organization could do much more.

J Street has withheld support for two pieces of legislation important to justice for Palestinians.

H.R.2407 is a bill that would disallow aid dollars from the US from being used to detain, prosecute, incarcerate, and torture Palestinian children (read more about H.R.2407 here). The Intercept reports that J Street has steered clear of the bill allegedly because “the bill’s language implies that all U.S. military aid to Israel is being used to abuse Palestinian children, something it believes is not accurate.” (Others do not read it that way).

The Leahy Laws (passed in 1998 as updates to the 1961 Foreign Assistance Act) similarly seek to withhold aid to any country committing Gross Human Rights Violations (GHRVs). (Read more on the Leahy Laws here.) J Street is also unwilling to push for these laws to be applied to Israel because “in J Street’s eyes, the law should be applied to only the most extreme human rights violations like mass sexual violence, massacres, or ethnic cleansing.” Apparently, Israel’s establishment through ethnic cleansing does not count.

Candidates could do better

Significantly, the Senate lacks a companion bill to H.R.2407, although, as Mondoweiss points out, the sponsor of the House bill, Betty McCollum (D-MN-4) has approached both Senators Warren and Sanders, asking them to introduce one.

If Americans Knew recently pointed out, almost twice as many liberal Democrats sympathize more with Palestinians than with Israel.

And a recent survey showed that over 60 percent of Americans feel that Israel is receiving too much U.S. aid in general – many of them feeling it is “much too much.”

It appears that some of the candidates are starting to catch up with voters, while others have a long way to go.

About the two-state solution:

Most fully informed, committed supporters of Palestine do not support the “two-state solution.” Because Israel has 650,000 settlers entrenched in the occupied West Bank and East Jerusalem, the possibility of dividing the land into two states is unlikely, and if it did happen, Israel would demand that a Palestinian state be demilitarized and under almost total Israeli control. Palestinians would end up with a tiny (22% of their historic homeland at best), indefensible, noncontiguous state and be at the mercy of their heavily armed neighbor.

While Palestinians themselves must ultimately decide what they want, people who believe in justice generally favor a single democratic state with equal rights for all. The “danger” of the one-state solution lies in the fact that it would result in a Palestinian majority, nullifying the “Jewish state” project (which was inequitable from the beginning). It is the only fair solution on the table right now (Read books by Mazin Qumsiyeh, Virginia Tilley, and Ali Abunimah for more on the one-state solution.)