You Are Here: Home → Israel is systematically poisoning one million Palestinian children 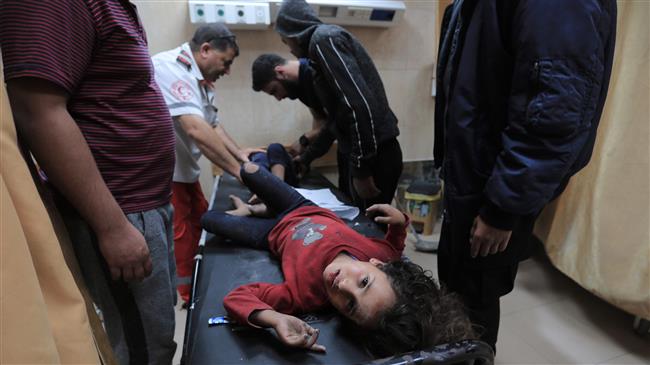 Palestinian medical workers tend to wounded children, members of a family where six were killed in an Israeli airstrike in central Gaza Strip on November 14, 2019. (Photo by AFP)

Gaza has become “uninhabitable,” not because of ecological disaster or Palestinian poor stewardship of the land, but because Israel chooses to destroy it by every means – poisoning, starvation, disease, poverty, medical neglect, and invasion – while the world stands silent. (Read this for examples of atrocities.)

by Robert Inlakesh, reposted from PressTV

We have now entered 2020, the year in which experts at the United Nations (UN) once predicted Gaza would become unlivable. But the sad reality is not only that those same experts said that Gaza was already unlivable in 2017, but that now the population of 2 million residing in Gaza are under the real threat of genocide.

Sara Roy of Harvard University’s Centre for Middle Eastern studies, who is considered the leading scholar on Gaza’s economy, has written that “innocent human beings, most of them young, are slowly being poisoned in Gaza by the water they drink and likely by the soil in which they plant.” So let us break down that statement, based upon the data available to us.

Facts on the ground

The population of the Gaza Strip is over 2 million strong, more than 50% of which are children (18 and under). Ninety-seven percent of Gaza’s water is undrinkable with only the upper 10% of Gaza’s population having access to clean water according to the UN. If we take these statistics and we look at them critically that would mean that according to conservative estimates only 40% of Gaza’s children are consuming water that is fit for human consumption. This means that parents in the Gaza Strip are forced to make the decision to allow their children to drink contaminated water in order for them to survive.

Israel, which has enforced its illegal blockade of Gaza since 2006 – although Zionist propagandists claim it started in June of 2007, which is incorrect – is under international law required to provide Gaza with the ability to sustain itself. Gaza is not a State; it is not a sovereign territory in of itself. According to the UN Gaza constitutes part of what is called the Palestinian occupied territories, with the focus here being on the word “occupied.”

According to the 4th Geneva Convention, Israel is required under International Law to provide the ability for Gaza and the West Bank to sustain an environment of livability. Israel will argue, however, that Gaza specifically is not occupied; that it withdrew in 2005. However Israel still controls the population registry, the entries and exits, all imports and exports, the electromagnetic sphere, the armistice lines (what Israel calls the border), the territorial waters, airspace as well as having a monopoly on the electricity in Gaza. Israel controls Gaza through and through; meaning that if Israel does not declare an occupation, it is a de facto annexation of the territory.

In excess of 108,000 cubic meters of untreated sewage water flows into the Mediterranean Sea from Gaza. This is due to a lack of power for Gaza’s desalination plant and the lack of building material required to expand, both of which are due to Israel’s policies towards the besieged coastal enclave. The situation is so bad that not only is Gaza’s sea water heavily contaminated, leading to deaths as recently as last year, but also Israel’s Askalan (Ashkelon) based desalination plant periodically halts operations due to the pollution, showing that Israel is willing to put the purification of 20% of its own water at jeopardy in order to punish the Gaza Strip.

Rising from the problem of water contamination is also disease. Gidon Grumberg, the founder and director of Israel’s ‘Ecopeace’, told the Jerusalem Post in 2016 that Gaza is a ticking time bomb for cholera and typhoid epidemics. Since then there have been repeated calls for a change to be made to Gaza’s lack of clean water by various experts. If a change is not made in 2020 then Gaza could become a hotbed for disease the way that Yemen has, again due to an illegally imposed blockade.

Beyond the water problem are also numerous other issues plaguing Gaza, all of which are again due to Israel’s illegally imposed – for nearly 15 years now – siege. Upwards of 80% of Gaza’s population are reliant upon international food aid in order to survive, with Israel enforcing a policy of “putting the people of Gaza on a diet,” entailing that Israel counts the minimum caloric intake for the Gazan population to stay alive. Israel of course controls the food aid coming into the Gaza Strip and even makes a profit off of it. The restrictions Israel applies to food coming into Gaza is also used as a political tool in order to punish the Palestinians for their acts of resistance against Israel.

The conservative estimates, according to the United Nations, also indicate that Gaza’s youth unemployment rate is close to hitting 70% with an overall unemployment rate recorded to be at around 50%. Israel also has repeatedly blocked Palestinian cancer patients from entering Israel in order to receive life-saving treatment. Not only this, but due to the lack of power in Gaza, cardiac monitors and X-ray machines become unreliable. In the first half of 2019, the Gaza Health Ministry, which has a regular budget of $40 million a year, had only 10 million dollars worth of supplies available to them and in July (2019) declared a warning of an unprecedented shortage of medicine and medical supplies. According to the World Health Organization 39% of Gaza applications for cancer patients to exit the blockaded Strip were “unsuccessful” in 2018.

Gaza’s population is subjected to sewage regularly flooding, after rainfall, into the streets and causing sickness, especially amongst the poorer population. Even the more well-off, financially, of Gaza’s population, some of which reside in areas such as Gaza City (North East Gaza), are losing their wealth. Specifically the residents of the al-Rimal area, who are viewed by many as living in an area of prestige are having to flee to places like Istanbul, or become refugees abroad and are losing their families assets due to an absence of income.

Gaza currently survives on a few hours of electricity per day, this is due to the fact that Israel put a cap on the amount of electricity it allows into Gaza, as well as the fact that Israel has bombarded and destroyed Gaza’s electrical grid and power plants, on various occasions. The sole, partially destroyed by bombardment, power plant in Gaza is also in a semi-operational state due to the cutting of diesel fuel from the Strip in early 2018, after the Palestinian Authority stopped paying for the fuel.

As of February 2018, the Gaza Strip has been in a “state of emergency.” Enduring, since the beginning of the siege, eight large-scale military offensive massacres by Israel, with hundreds of smaller bombardments coming in between.

A 17 year old in Gaza would have experienced Israeli internal occupation, a 15 year long ever tightening siege, 8 large scale massacres, hundreds of other attacks, three wars, the constant buzzing of drones, the deaths of friends and family, temporary or permanent displacement and the list goes on and on.

To top this all off, when the people of Gaza rose up in their hundreds of thousands non-violently, beginning on the 30th March (2018), they were ignored by the world which has done nothing to stop Israel for its murder of 330+ unarmed demonstrators and the injuring of approximately 40,000. Until now, the demonstrations are still ongoing on a weekly basis and no Israeli soldiers have been killed or sustained any serious injuries.

Resistance is a right

Aviv Kochavi said recently in a speech pertaining to a future war against Gaza, that Israel will target electrical, agricultural and other structural components, which according to Israel contribute to keeping Hamas – Gaza’s governing Party – afloat. This means that if Israel does begin a new massacre (war) against Gaza – or Hamas as they will claim – then it will mean that all the statistics listed off above will accelerate to unprecedented numbers and that Gaza will become even more uninhabitable.

The only questions now left to be answered are, what will stop Israel from completely genociding the people of Gaza? and how will the world’s future generations look at us today for allowing this holocaust to occur against the people of Palestine. One million Palestinian children are being systematically poisoned by Israel and there is nothing but deafening silence.

Robert Inlakesh is a journalist, writer and political analyst, who has lived in and reported from the occupied Palestinian West Bank. He has written for publications such as Mint Press, Mondoweiss, MEMO, and various other outlets. He specializes in analysis of the Middle East, in particular Palestine-Israel. He also works for Press TV as a European correspondent.