You Are Here: Home → Water Works in Gaza Destroyed 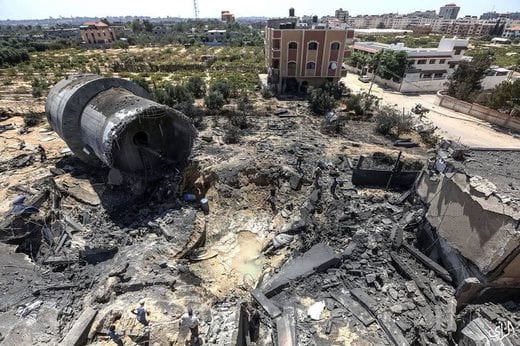 What is left of the Water and Sanitation Works, al-Mughrraqa City, Gaza.

Overnight on August 8-9, Israeli warplanes bombed the Water and Sanitation system for al-Mughraqa City in Gaza.

There are several possible explanations for this heinous act:

Not surprisingly, the destruction of water works is a breach of international law:

Attacks against Objects Indispensable to the Survival of the Civilian Population

It is prohibited to attack, destroy, remove, or render useless objects indispensable to the survival of the civilian population, such as foodstuffs, agricultural areas for the production of foodstuffs, crops, livestock, drinking water installations and supplies and irrigation works, for the specific purpose of denying them for their sustenance value to the civilian population or to the adverse Party, whatever the motive, whether in order to starve out civilians, to cause them to move away, or for any other motive.

This was the Water and Sanitation Department of al-Mughraqa city, central Gaza Strip. It was hit and completely destroyed by several Israeli air strikes last night.

The Israeli destructive regime targets Gaza infrastructure so that it would cause the hugest damage possible! pic.twitter.com/q89KgvVf2V