You Are Here: Home → Palestinian Art and Culture as a Battlefield for Israel

Palestinian Art and Culture as a Battlefield for Israel 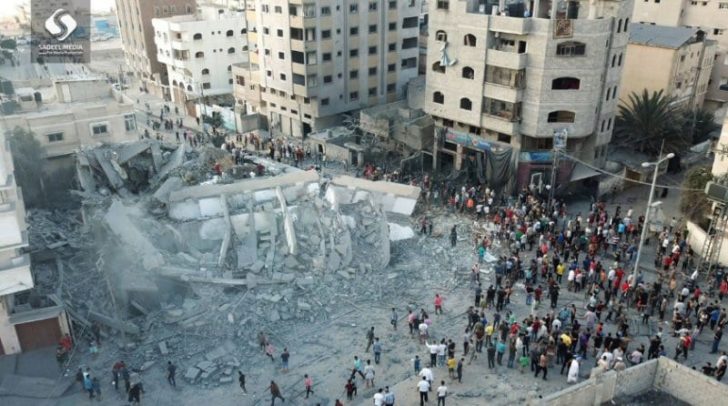 An Israeli airstrike on a cultural center in Gaza City, on Thursday, turned the five-story building into rubble.

In recent weeks, Israel has targeted not only unarmed protesters, medics, journalists, and children, but also symbols of Palestinian art and culture. For example, the 5-story Al-Meshal Cultural Center – along with hundreds of traditional dance costumes – was decimated, and an outspoken poet was imprisoned.

[For a list of Palestinians and Israelis killed since 2000, go here.]

It’s no coincidence that cultural landmarks and cultural icons – poets, writers, dancers – are being picked off in Israel’s unrelenting assault on Palestinians. Israel isn’t afraid of “incitement to terror” – warplanes and snipers can take care of the slightest hint of that.  It’s incitement to Palestinian pride and hope that Israel fears.

A Palestine that believes in its history and its future, is dangerous to Israel, because this is a Palestine willing to fight for itself.

Below are a few headlines and excerpts from recent articles with examples of how Israel is sabotaging or even destroying Palestinian culture, and with it, Palestinian identity – or so Israel hopes.

In this first and most blatant example, Israel completely obliterated an important cultural center in Gaza.

On August 9 2018, a series of Israeli airstrikes completely destroyed the al-Meshal Foundation, in the Gaza Strip. Being one of the very few cultural spaces left for Palestinians in the besieged enclave, this destruction is devastating.

The five-floor building held a theatre, a library, offices for cultural associations, and hosted an office for Gaza’s Egyptian community.

Edrees Taleb, one of the center’s theatrical directors, explained, “Israel says its forces targeted the building because part of it was used by Hamas. But I have been there for more than eight years, there has never been anything related to any political party. Not in the past, and not recently.”

Hanin al-Holy, 23, said that building was targeted because it provided the residents of Gaza with a source of morale, having endured more than ten years of blockade by Israel.

She added, “They [Israeli forces] only targeted the building because they insist on destroying anything that brings life to the Gaza population. Al-Meshal centre was a symbol of culture, something that reinforced our Palestinian identity. They targeted it because art is, too, a form of resistance.”

The Palestinian Ministry of Culture in Gaza held a press conference on the ruins of the building on Friday morning to condemn the Israeli targeting of the cultural centre. Dozens of young men and women and children also gathered to protest the Israeli attack.

Among the protesters were members of the 110-member al-Anqaa (the Phoenix) band, who lost their headquarters, equipment and uniforms in the attack on the building.

“Israel’s message is clear. Destroying such a prominent cultural building in Gaza has only one meaning; that its war is not only against armed factions and Palestinians, but also against anything that has to do with the Palestinian identity,” said Eid Musabbeh, 28, manager of the band.

Musabbeh said that despite the despair and shock they feel seeing everything they have been building for the past 13 years blown away, they “will not stop.”

“Our band was named after the fictional bird that arises from the ruins. So will we,” he continued. “We cannot give up now when our art has become a tool of resistance”

For dozens of associations and centres focusing on reinforcing the Palestinian culture, the al-Meshal building was their only incubator in the coastal enclave.

Alaa al-Gherbawi, 26, who works as an activity coordinator for the Palestinian Culture Palace, which was based on the fourth floor of the al-Meshal building, said the centre was not only a building, but a “cultural landmark.”

“By destroying the building, everything was gone, including our offices and the children’s Dabke (Palestinian folk dance) uniforms,” she added. “But this is not the end. We will find another office space to continue to coach children and do performances, even on the ruins of the destroyed building”.

Marah Bseisso, a 15-year-old singer and member of the Palestinian Culture Palace, said the targeting of her favorite place in Gaza “broke my heart”.

“I used to sing songs for Palestine, for peace and childhood, and this place gave me a platform to make my voice heard,” she said.

In this example, Israel seems to be exercising colonization over Palestinian art by displaying works when artists had expressly refused to permit their work be part of the Israeli exhibit.

A new exhibition named “Stolen Arab Art” featuring works by Arab artists who refused to show in Israel opened in July 2018 in a Tel Aviv art gallery, prompting criticism by those saying it is unethical to display works without artists’ consent.

The south Tel Aviv art gallery, 1:1 Center for Arts and Politics, is displaying four pieces of video art by four different Arab artists who do not cooperate with Israel for political and ideological reasons. The works are presented without the artists’ knowledge or consent and without attributing credit to the artists – their names do not appear in the advertising for the exhibition or in the gallery space itself.

According to Krieger, he takes very seriously the possibility that this exhibition would harm the artists or put them at risk. “It’s the only real concern we had and we consulted lawyers, local and international, to understand the risk. The title of the exhibition makes it clear that there’s no consent here, that it’s stolen, that it’s an Israeli act of aggression, which is also why we don’t advertise the artists’ names.”

Here again, Israel seems to have an agenda, namely the destruction of proof of Palestinian presence through history in the region.

Palestinian TV reported that Israeli missiles in July 2018 targeted the “Arts and Crafts Village,” which is run by the City Council in Gaza, and was founded by late Palestinian President Yasser Arafat, in 1998, with funding from the UNDP.

The Arts and Craft Village building is filled with archeological materials, including pottery, metal crafts, and various historical valuables.

Ihsan Qaja, the head of the Arts and Crafts Village, said that the village, which is approximately 1000 square meters, has four buildings preserving the Palestinian archeological history, arts and crafts. Qaja denounced the Israeli attack, which violates various International laws and targets Palestine’s history preservation projects.

Emad Siyam, the general-director of the Cultural Affairs at Gaza City Council, said the Israeli strikes caused excessive damage to the Arts and Crafts Village, and described the bombings as a “deliberate and barbaric assault against Palestinian heritage and history.”

Dareen Tatour sentenced to five months in prison over poem

Dareen Tatour’s poem was called “incitement to terrorism,” and she was sentenced to prison, although Israel considers itself a bastion of free speech.

On July 31 2018, Tatour, 36, an Israeli citizen was sentenced by the Nazareth district court after having already served nearly three years under house arrest.

Tatour was arrested during an Israeli police raid in October 2015, a few days after posting on Facebook and Youtube a video of herself reading a poem titled “Resist, my people resist them” as the soundtrack to images of Palestinians in violent confrontations with Israeli troops.

Prosecutors said her post was a call for violence. She spent the following months under house arrest, during which time she was barred from publishing her work and accessing the internet.

In May, Tatour was convicted of online incitement of “terrorism” for her poem. She has denied the charges.

In the video, which received less than 300 views, Tatour urged Palestinians to never “agree to a peace solution”.

She said there was no call for violence in her poem, rather that it calls for a non-violent struggle, but Israeli authorities interpreted it to be violent.

“I wasn’t expecting justice to be done. The case was political from the start because I am Palestinian and support freedom of speech,” she told reporters at the Nazareth Magistrate’s Court in northern Israel.

The indictment against her included her lines: “I will not succumb to the ‘peaceful solution’/Never lower my flags/Until I evict them from my land.” 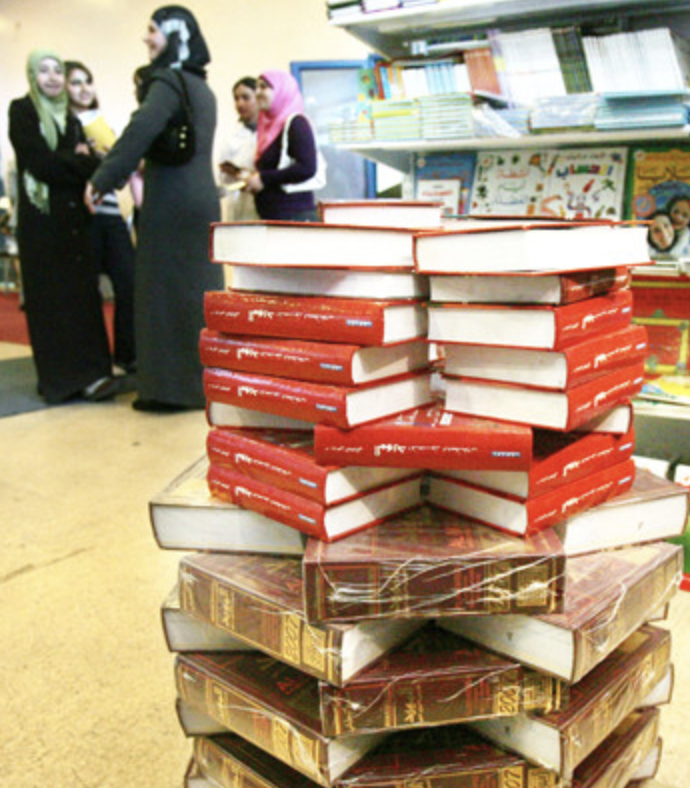 And in yet another act, this one defying both freedom of speech and freedom of movement, Israel refused entry to authors and publishers at a book fair.

(May, 2018) Israeli authorities have blocked hundreds of Jordanian and Arab authors from attending the annual Palestine International Book Fair in Ramallah.

The event, held under the slogan “Jerusalem the Capital of Palestine,” features 500 Palestinian and Arab publishing houses. It was opened by Ehad Bseiso, the Palestinian Culture Minister, on May 3 and runs until Sunday.

The Israeli authorities denied travel permits to authors and publishers despite the fact that their books were shipped to the event and displayed at the book fair.

Nawal Heles, director of the fair at the Ministry of Culture told Arab News that she had received no explanation from the Israeli side.

The Jordanian Publishers Association said the Israeli action amounted to “war against Palestinian culture and the insistence on destroying cultural bridges connecting with Palestinians living under occupation.”