You Are Here: Home → New pro-Israel orgs try to save the Jewish State’s sagging reputation 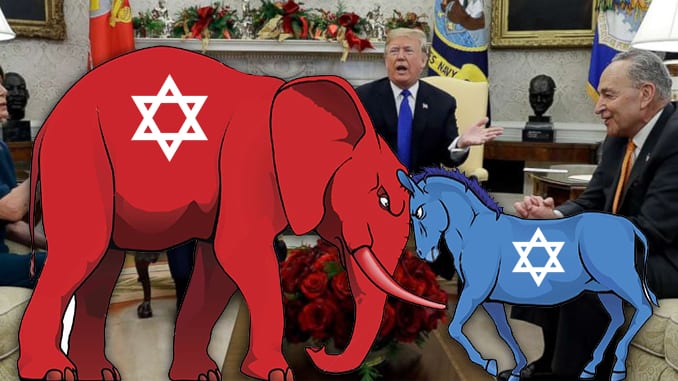 As Democratic support for Israel wanes, new pro-Zionist organizations are committed to rekindling the love affair by any means possible.

New organizations dedicated to “defending” Israel are proliferating due to concerns that the American people are finally waking up to the fact that they have been getting ripped off by a vast Zionist conspiracy for the past 70-plus years. Ironically, while it has become possible to criticize Israel even in the mainstream media, the United States government itself has become more firmly in the grasp of the Israel lobby, most recently manifested in bills passed by Congress pledging undying love and affection for war criminal Benjamin Netanyahu and all his works. This has been due in large part to the effective lobbying by the American Israel Public Affairs Committee (AIPAC), which met in Washington in March and drew 18,000 of its supporters to both show up and lobby their congressmen.

The congressional love affair with Israel has been accompanied by billions of dollars in U.S. taxpayer-provided Danegeld per annum plus a de facto commitment to send American soldiers to fight and die for Israel even if Netanyahu starts a war for no reason whatsoever.

By one estimate there are 600 groups operating in the United States with the objective of promoting Israel’s interests. They run the gamut, politically speaking, and include leftward leaning organizations, like J Street, that aggressively support a two-state solution for Israel-Palestine while at the same time ignoring the fact that Israel has expanded its settlements in such a fashion as to make a Palestinian state unrealizable. On the extreme right is a group founded in 2010, which calls itself the Emergency Committee for Israel (ECI), headed by none other than Bill Kristol, former editor of the now thankfully defunct Weekly Standard magazine. The ECI board included Rachel Abrams, wife of pardoned felon Elliott Abrams, who is currently seeking to destroy Venezuela.

ECI is largely inactive at the present time, but when it was launched it claimed to be the most pro-Israel of all pro-Israel groups, which would be quite an achievement. It was most active in 2010-14 when it ran full-page ads against liberal advocacy groups, attacked the Occupy Wall Street movement for being anti-Semitic, and criticized individual congressmen for not being sufficiently pro-Israel. In 2013 the group came out against the proposed appointment of Chuck Hagel as secretary of defense because he had once mildly criticized Israel.

The recent controversy over comments critical of Israel and its lobby made by newly elected Rep. Ilhan Omar (D-Minn.) has sparked a wave of pro-Israel activism in and around Congress. At the end of January a new political group was formed by several prominent veteran Democrats, “alarmed by the party’s drift from its longstanding alignment with Israel.” The new group, which is calling itself the Democratic Majority for Israel (DMI), will support Democratic Party candidates who “stand unwaveringly” with the Jewish state.

The group, which is headed by Mark Mellman, a leading Democratic Party pollster, already has some “substantial” funding from the usual Jewish Democratic Party donors and it is interested in assisting potential candidates who are unambiguously supportive of Israel because of “shared values” and its contribution as “one of America’s strongest allies.” The website promises: “We will work to maintain and strengthen support for Israel among Democratic leaders including presidential and congressional candidates as well as with the grassroots of progressive movements. We are committed to doing so because we recognize that America’s relationship with Israel, the sole democracy in the Middle East, is a mutually beneficial one based on shared values and shared interests.”

Due to the fact that the common values and interests are difficult to identify—as they hardly exist and Israel is neither an ally nor a democracy—it might be tough sledding to convince skeptics of the actual value of the relationship for Americans. Instead, one suspects that the group will rely on the usual appeals to tribal or religious sentiment and citations of the holocaust coupled with threats of anti-Semitism leveled against those who question the formula. In reality, DMI, which will be active in state primaries, will likely create incentives through development of a funding mechanism for potential candidates who are enthusiastic about Israel while withholding funds from those who are not.

And there will be opposition to the snake oil DMI is selling, not only from Omar. She and Palestinian-American Rashida Tlaib of Michigan both support the Boycott, Divestment, and Sanctions (BDS) movement against Israel, and there are also a number of other new congressmen who will not hesitate to criticize Israel when it uses lethal force against Palestinian demonstrators. There are also reports that Democratic Party-declared presidential candidates Kamala Harris, Bernie Sanders, Elizabeth Warren, Beto O’Rourke, Pete Buttigieg, Kirsten Gillibrand, Jay Inslee, and Julian Castro have all confirmed they didn’t attend the AIPAC conference this year, possibly linked to a call by the leading progressive grassroots organization MoveOn for a boycott. Opinion polls also indicate that Democrats who sympathize more with Israel than with the Palestinians is at an all-time low of 19%.

Another new bipartisan pro-Israel political action committee was also launched in March in Washington. Pro-Israel America is headed by two former senior AIPAC staff members, Jonathan Missner and Jeff Mendelsohn. It is intended to provide political donations to candidates from either major party who adopt pro-Israel positions. On its initial list, it endorsed a total of 27 candidates— 14 Democrats and 13 Republicans—all of whom have demonstrated a willingness to support pro-Israel legislation in Congress.

A press release from Pro-Israel America composed by Mendelsohn stated its mission: “The best way to strengthen the U.S.-Israel relationship is to elect pro-Israel candidates to Congress, and that requires political action from the thousands of Americans who care deeply about this issue.”

The Pro-Israel America website, which is still under construction, will reportedly encourage small donations to political campaigns, unlike the usual practice of bundling to create large contributions. Potential donors will be able to go to the website, evaluate candidates based on their pro-Israel credentials, and then contribute directly to their campaigns.

Finally, there is a third new online group called Jexodus, headed by a swimsuit model named Elizabeth Pipko, that is trying to convince Jewish voters to leave the Democratic Party and become Republicans because the GOP is now the party of Israel. It is hard to argue with that, as President Donald Trump has now moved the U.S. embassy to Jerusalem and recognized Israeli sovereignty over the Golan Heights, while Secretary of State Mike Pompeo has declared that God elected Trump to save the Jews from Iran. There will likely be even more concessions to Netanyahu in the lead-up to America’s own upcoming election in 2020.

All of the pro-Israel groups taken together constitute a veritable political juggernaut that seeks to advantage Israel and benefit it directly without regard for the damage done to American democracy and to actual U.S. interests. They should rightly be seen as organizations that regard their loyalty to the United States as negotiable, but they try to obfuscate the issue by claiming, wrongly, that there exist compelling reasons why Israel and the U.S. should continue to be best friends.

As Americans increasingly begin to appreciate how Israel is in fact a serious liability, that line will not continue to sell very well, no matter how many congressmen and tame journalists are bought and no matter how many new groups pop up like mushrooms funded by Jewish billionaires. Change is coming.

Philip Giraldi is a former CIA counter-terrorism specialist and military intelligence officer and a columnist and television commentator. He is the executive director of the Council for the National Interest.