You Are Here: Home → Palestinian groups agree to Egyptian-brokered truce with Israel 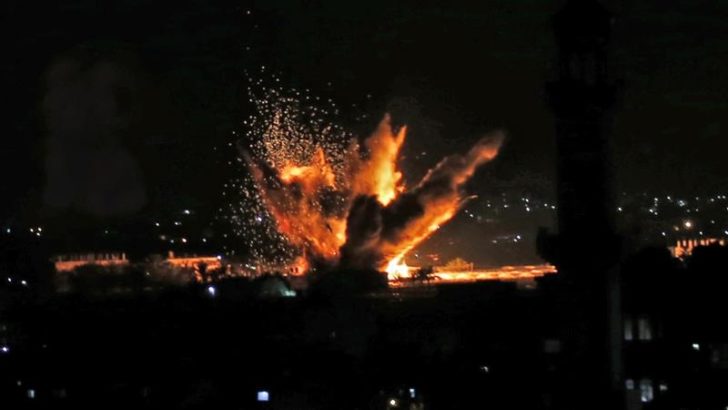 Last weekend saw an escalation of violence that started when Israeli military infiltrated Gaza, initiated a firefight, and retreated under cover of shelling. One Israeli and 7 Palestinians were killed, and Hamas responded with rockets. Today, factions in the besieged Gaza Strip say they have agreed to an Egypt-brokered ceasefire. “The resistance will respect this declaration as long as the Zionist enemy respects it.”

Palestinian groups in the besieged Gaza Strip say they have agreed to an Egyptian-brokered ceasefire with Israel to end the worst violence between the two sides in years.

Al Jazeera’s Harry Fawcett, reporting from Nahal-Oz near the Gaza-Israel fence, said Hamas-led factions on Tuesday accepted the truce “to restart the situation that prevailed up until this latest military escalation”.

Hamas is the group administering the besieged Gaza Strip.

Fawcett added: “The Israelis do not confirm or deny such things, but Israeli media are reporting, citing an unnamed official, that Palestinian factions tried through four separate mediators to request a ceasefire.”

A statement by the Gaza groups said: “Egypt’s efforts have been able to achieve a ceasefire between the resistance and the Zionist enemy.

“The resistance will respect this declaration as long as the Zionist enemy respects it.”

Earlier, senior Hamas official Ismail Haniya said that the Palestinian group was prepared to return to a ceasefire agreement if Israel “stops its aggression” on the Gaza Strip.

“Should the Occupation [Israel] stop its aggression a return to the ceasefire understandings will be possible,” Haniya said in a statement.

At least seven Palestinians have been killed in Israeli attacks on the coastal enclave since Monday, in the worst violence between the two sides since the 2014 war.

The latest escalation erupted late on Sunday when Israel launched a botched raid in Gaza that killed seven other Palestinians and one of its commanders.

Hamas and other armed factions on Monday fired over 400 rockets or mortar bombs at Israel, with Israel responding with dozens of air raids.

The Palestinian Shehab news agency reported that civilian buildings, the Al-Aqsa TV channel and the Al-Amal hotel were all targeted by Israeli strikes.

Gaza – a territory of more than two million people – has been under a devastating Israeli-imposed blockade for the past 11 years, which has severely restricted the movement of Palestinians in and out of it.

Israel withdrew its troops and settlers from the Strip in 2005 but, citing security concerns, maintains tight control of its land and sea borders, reducing its economy to a state of collapse.

Egypt also restricts movement in and out of Gaza through its border.

Mohammed Daraghmeh, a columnist and political analyst, said this latest escalation could be an important moment in the future of the Gaza blockade.

“Both sides have realised that after a series of wars they need to have a different approach.

“After a period of calm in Gaza, Israel finally allowed Qatari money to be funneled to Gaza, to have oil imported, to offer some relaxation amid the blockade. This escalation has come at a critical moment.”

Gideon Levy, a columnist at Haaretz and member of the newspaper’s editorial board, said unless Israeli Prime Minister Benjamin Netanyahu ended the siege, the violence would continue.

“Both parties are not interested in a war, but both are not doing enough to prevent one,” he said.

“Netanyahu has no intention to put an end to the siege, so as long as it continues, we will, again and again, witness one violent action leading to another violent act.”

Israel and Hamas have fought three wars since the group seized control of Gaza after it won elections in the enclave in 2006.

In the most recent one in 2014, more than 2,200 Palestinians were killed – the majority of whom were civilians – and tens of thousands were left homeless. Seventy-three people, most of them soldiers, were killed on the Israeli side.