You Are Here: Home → Playground or battleground? 2 stories in 1 weekend

Playground or battleground? 2 stories in 1 weekend 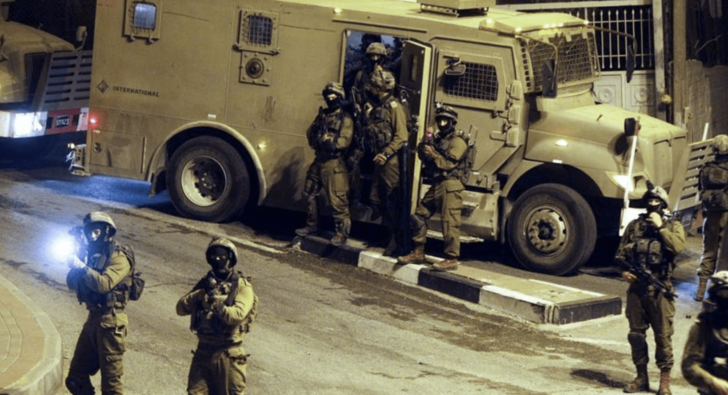 On Saturday, Israeli soldiers tried to seize playground equipment from a Palestinian park, but were chased off.

On Sunday, 45 Americans along with 20 Israelis and Palestinians were detained and had their passports photographed after helping repair a playground near Bethlehem; Israel claims the group were rioting and engaging in illegal construction.

from the Palestinian Information Center

Violent clashes broke out on Saturday evening between Palestinian young men and Israeli soldiers near Tahadi School in Beit Ta’mir town, east of Bethlehem in the occupied West Bank.

The soldiers intensively fired tear gas and stun grenades at the angry young men to disperse them. No one was reportedly injured during the events.

Earlier, Israeli troops stormed the town and  tried to seize the play equipment from the park, but they withdrew from the area after seeing foreigners there before they repeated their attempt later in the evening.

However, the young men managed to fend off the troops and forced them to leave the town.

The army detained some 45 left-wing Americans in the West Bankon Saturday. It also photographed their passports and confiscated some of their equipment. The group’s leader says they were planting flowers in a Palestinian village. The IDF says they were rioting and engaged in illegal construction.

The activists, from American Friends of Combatants for Peace, came to the village of Jubbet al-Dib, south of Bethlehem, Saturday morning to repair a playground. Upon leaving the village they were detained for about two hours.

Beth Schuman, the organization’s executive director, said the group included about 45 foreign activists and 20 Israelis and Palestinians. “The army saw us when we arrived,” she added.

While there, they worked on the playground, laying down soil and rocks and planting flowers, but “we didn’t build any buildings,” Schuman said. “The army watched us from the hill opposite the whole time.

“When we got on the bus after the meal,” she continued, “the army stopped us at the intersection – not at the checkpoint. They got on the bus with guns and everything and said it was a routine check. This check included photographing all our passports.”

Schuman called the American consulate, “and they [the soldiers] were very disturbed,” she said. “The officer on the scene simply refused to talk to me. Every time I spoke, he turned his back. He didn’t give me his name.”

She said the soldiers also confiscated a camera from one activist. After all the passports had been photographed, the soldiers let them leave.

Israel’s Civil Administration in the West Bank said, “On November 10, 2018, illegal construction work was done on a building about which a petition to the High Court of Justice is pending. When the [security] forces arrived, accompanied by a Civil Administration official, the activists present at the site began rioting.”

Another defense official said the passports were photographed so the people participating in the alleged illegal building could be identified.

But Schuman vehemently denied that the group built anything, saying they merely laid down soil and planted flowers near the school. She also denied the claim of rioting. “We didn’t demonstrate violently at any point,” she said. “We made a garden. That’s all we did. There was no violent activity while we were there. Zero.”

She said other activists later told her that after her group left, some of the children threw stones at nearby military jeeps. “I was no longer there, so I don’t know exactly what happened, but children from the village went down and began throwing stones.”

The Israeli and Palestinian activists, who were still present, “told them not to throw stones, and then the children started leaving,” Schuman added. “Nevertheless, the army fired tear gas.”