You Are Here: Home → 7 Palestinians, 1 Israeli killed in weekend incursion into Gaza 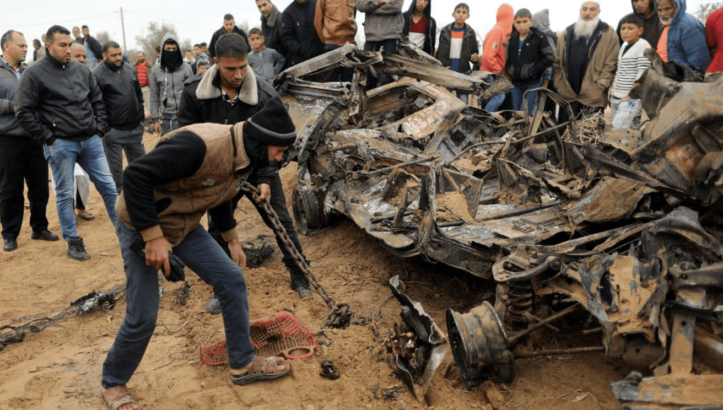 After Israel has demonstrated for months that borders are sacred, its military has once again crossed into Gaza. In what it characterizes as an intelligence gathering operation that “encountered a very complex reality,” 1 Israeli soldier and 7 Palestinians were killed.

3 Israelis and at least 210 Palestinians have been killed in the last 6 months of asymmetrical confrontations.

from If Americans Knew staff

Israel has famously been using snipers against unarmed Palestinians every Friday for the last 6 months, as the Palestinians protest for their human rights. At least 210 have been killed and 18,000 injured.

Israeli Prime Minister Benjamin Netanyahu has characterized the efforts of the snipers as “holy work”; Defense Minister Avigdor Lieberman, commenting on a video of a sniper shooting an unarmed Palestinian, declared, “The sniper deserves a medal, the photographer a court martial.”

An Israeli army spokesman explained the use of lethal force that targets civilians who are often hundreds of meters from the border: “We are defending ourselves against terrorists and rioters. We shoot in order to stop them so that they cannot harm the security infrastructure and infiltrate into Israel.”

On Friday, according to the New York Times, “Seven Palestinians were killed by Israeli fire on Friday during stormy protests along the fence dividing Israel and Hamas-run Gaza…Four of them were shot dead after they crossed into Israeli territory and approached an army snipers’ post.” The piece added, “There were no injuries on the Israeli side.”

The acceptable standard for lethal force remains the same as every other week: crossing the border is absolutely unacceptable; being near the border is also grounds for deadly gunfire.

IMEMC, the International Middle East Media Center, reports that “undercover Israeli soldiers infiltrated into the Gaza Strip, on Sunday at night, and assassinated two senior leaders of the Al-Qassam Brigades, the armed wing of Hamas.”

They were driving a Volkswagen; some were wearing veils, disguised as women, when members of Al-Qassem Brigades stopped the car, and asked the passengers to step out and show their ID cards.

The Israeli soldiers opened fire, killing the group’s leader and injuring another man.

As the Al-Qassam Brigade fighters chased the car, the Israeli army “initiated a series of air strikes, the army fired missiles and shells to secure the retreat of its undercover soldiers, killing five other Palestinians. Hamas fighters exchanged fire with the soldiers killing one of them.”

In what the Guardian described as an “apparently botched undercover raid and ensuing firefight, [Israel] has threatened to destroy a precarious, unofficial ceasefire.”

The Israeli military released a statement: “During an IDF [Israel Defense Forces] Special Forces operational activity in the Gaza Strip, an exchange of fire evolved.”

Another IDF comment clarified the official position: “special operation yesterday was not intended to kill or abduct terrorists, but to strengthen Israeli security”, without specifying how.

The Guardian disclosed that “Israeli media reported the operation had been to gather intelligence. The public radio station Kan reported IDF special forces had their cover blown as a result of a technical malfunction, and became pinned down.

“Residents in the area where the fighting took place said…the soldiers shot [Hamas commander Nour Baraka] with a silenced gun before speeding to an olive grove, where they were extricated by helicopter. Hamas militants in pursuit had been bombed by air, residents said, and Israeli aircraft destroyed the car used by its forces once they had left.”

Ha’aretz quoted a military spokesperson: “What was revealed tonight is the very tip of operations that are carried out regularly and the purpose of which is to enable Israel’s superiority as it exists today.”

Infiltration was a “crime”

In a statement, Al-Qassam said that the “resistance in Gaza will continue to defend the Palestinian people,” and vowed that “the enemy will pay a heavy price for its crime.”

Hamas spokesperson Fawzi Barhoum stated, “what the resistance is doing in Gaza is honorable and brave, proving its readiness to perform its national duties, and to defend the people.”

The Palestinians killed in the Israeli offensive are:

IMEMC reports that al-Qarra had “just got married a few days ago.”

To see a full list of casualties in the Palestinian struggle for human rights, visit Israel/Palestine Timeline.