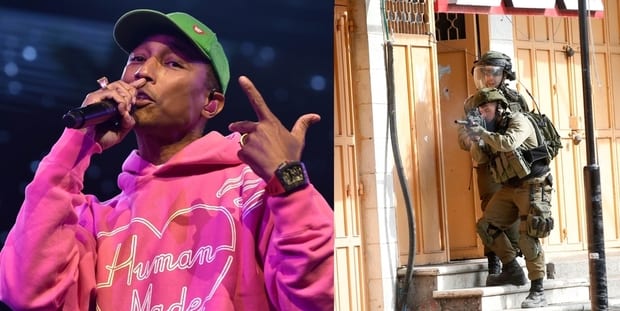 At the November 1st “Friends of the IDF” Hollywood gala, $60 million was raised in one night for Israel’s army. This is on top of $10 million a day in US military aid to Israel. Palestinians are outraged that American artists are supporting a regime that kills innocents and colonizes land.

As Hollywood stars celebrated at a fundraiser for the Israeli army last week in Los Angeles, halfway across the world Palestinians in the besieged Gaza Strip were waking up for another Friday of protest and bloodshed.

The gala on 1 November, organised by Friends of the Israeli Defence Forces and attended by actors such as Ashton Kutcher, Gerard Butler and Andy Garcia, was praised by Israel and its supporters for raising a record $60 million and bringing together more than 1,200 people.

A memorandum of understanding signed between Israel and Barack Obama’s US administration in 2016 included a record $38bn deal to provide Israel with military assistance over a ten-year period, the largest such pledge in American history.

In the occupied Palestinian territory and on social media, the star-studded event was met with anger and condemnation.

In 2016, Ashton Kutcher was filmed “shutting down” an activist from the BDS movement at a promotional event for the property rental company Airbnb, which was listing homes in illegal Israeli settlements. “But this company is about bringing people together and loving one another”, Kutcher said, speaking about the privately-held global corporation.

“The Israeli army will use these funds to buy more bullets and more bombs, only to kill more civilians,” said Ahmed Abu Artema, an organiser of the Great March of Return protests in the Gaza Strip. The rallies, which call for the right of return of refugees to their homes and an end to Palestinian suffering, have been ongoing since 30 March.

“The Israeli army has killed more than 200 civilians and wounded some 20,000; these people were men, women and children calling for basic human rights. They did not pose any threat to the Israeli army,” Abu Artema told Middle East Eye.

Despite cries of human rights abuses and violations of international law, the voices of Palestinians were nowhere to be heard at the Los Angeles event.

The gala’s attendees, who also included Arnold Schwarzenegger and the singer Seal, enjoyed a performance by producer and rapper Pharrell Williams.

Williams was attacked on social media for recently asking US President Donald Trump to refrain from playing his song “Happy” at his rallies only to perform it at the fundraiser.

Pharrell invented a new level of irony after he told Trump to stop playing Happy at his rallies and then performed it at an IDF fundraiser https://t.co/8vKURQMtnD

“It is difficult to understand how actors and performers, who carry the message of life, can support an army that carries out systematic killings, which contradict the essence of life and art,” Abu Artema said.

“To us, anyone who funds this army has blood on their hands,” he added.

Since the event, the hashtag #HollywoodFundsTerror has taken off.

Dear @Pharrell, you contributed in raising $60 million to a nasty army that has killed hundreds of thousands of my people. Is this the change you want in the world? You're a partner in crime. #HollywoodFundsTerror pic.twitter.com/hbPuWEmWag

#HollywoodFundsTerror!
Hollywood enables the Israeli Occupation Forces to execute the peaceful women and children in Gaza

For Mahmoud Shobi, a resident of the West Bank city of Nablus, funds from the US government, US taxpayer money and donations from American citizens have only allowed Israel to “intensify its occupation and colonialism”.

Shobi lost eight family members in 2002 when US-made bulldozers, bought by Israel, demolished his home with his family still inside.

“Israel has used its money and weapons to destroy our homes, our trees, and kill our people,” he told MEE. “It doesn’t matter where this money is coming from.”

“They’ve labelled us ‘terrorists’, though we fight for our land. Even in ‘peaceful’ resistance, as we see in Gaza, the protestors are being met with live bullets,” Shobi continued.

“But as families of martyrs and political prisoners, as people who are facing the occupation, these donations will only empower us to become more resilient.”

Fareed Taamallah, a political activist based in Ramallah, said he believes more needs to be done to raise awareness of the situation on the ground by the Palestinians in the West.

“Israel has effective tools to market itself as the only democracy of the Middle East and claim that it holds the same values as the American people, particularly with the Zionist lobby,” Taamallah told MEE. “They try to show Israel as a victim of Arab and Muslim terror.”

“We need to work with Palestinians in the US and Europe to change the narrative. We must be more active in raising awareness of where this money goes.”

The activist said the money raised in Hollywood would undoubtedly be used to further suppress Palestinians, pointing to Israel’s Nation-state law passed earlier this year.

“Every American dollar donated to the occupation’s state translates into our suffering as a Palestinian people,” Taamallah said.

Variety reports that billionaire Haim Saban, a major donor to the Democratic Party in the U.S. who is close to the Clintons, chaired the event for the twelfth consecutive year.